Born into a family of ancient nobility, Saint Magdalene of Canossa (1774-1835) found her perfect happiness in following Christ and serving the lowliest. 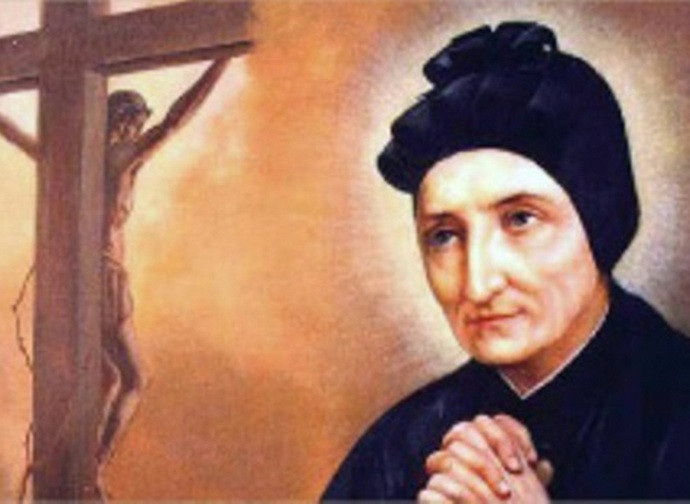 Born into a family of ancient nobility, Saint Magdalene of Canossa (1774-1835) found her perfect happiness in following Christ and serving the lowliest.

She was the third child of Marquis Ottavio di Canossa and Countess Teresa Szluha. She lost her father at the age of five and at seven was abandoned by her mother, who remarried and went to live with her new husband. In the meantime, an uncle had become her guardian; he entrusted the education of Magdalene and his other nieces and nephews to two tutors: a French governess, who had very bad relations with her pupils, and Don Pietro Rossi. In her adolescence she was struck by a very serious illness. She recovered from it when she was about 15 years old, emerging from it “completely strengthened in her intention to remain in the virginal state”, as she recalls in her Memoirs, written out of obedience.

She confided to Don Pietro her decision to consecrate herself to God and began to read the Rules of some religious orders. In 1791 she decided to retire to the Carmelite nuns of the Veronese monastery of Saint Teresa, where she stayed for about 10 months. Although attracted by the spirituality of Carmel, she discovered that cloistered life was not for her. After a second attempt in another monastery, where she stayed only three days, she sought the help of a spiritual director, trying to understand her vocation. During a Holy Mass, when she read the Book of Tobias, she felt an intense interior call towards works of charity. On another occasion, reciting a passage from Psalm 50, “I will teach the rebellious Thy ways”, she felt called to instruct her neighbour in the truths of faith. She was moved to tears when she heard talk of “Divine Glory”. As her love for the Crucifix grew, she began to bring together young girls from the streets and to visit the sick.

For some years she lived shuttling back and forth between Canossa Palace and various districts of Verona, where the houses she had rented for her young girls were located. On 8 May 1808, after overcoming the last family resistance, she was able to move with her companions to the monastery of Saints Joseph and Fidenzio, which had been closed by Napoleonic decree two years earlier but which Magdalene managed to revive after having laboriously obtained the transfer from the prefecture. This was the beginning of the Daughters of Charity, later called Canossian Sisters (now spread over five continents), whose mission was to instruct the poor, visit the sick, and teach Christian doctrine. She herself wrote their Rule. She procured catechisms and spread the cult of the Blessed Sacrament. She propagated her charism, founding other houses in Venice (1812), Milan (1816), Bergamo (1820) and Trent (1828). She also established the male branch.

Her vast written work, containing some 3,000 letters, reveals her great love for the Church and her concern for the salvation of souls, to the point of offering herself as a sacrifice for sinners. Very devoted to Mary, she wore a large medal with the image of Our Lady of Sorrows on the front and the symbols of the Passion on the back. Pius XII beatified her and John Paul II proclaimed her a saint in 1988. Wojtyla said: “Considering Magdalene of Canossa's life, one would say that charity, like a fever, devoured her: charity towards God, pushed to the highest peaks of mystical experience; charity towards neighbour, taken to the extreme consequences of the gift of self to others”.

Memoirs and other writings