He was together an ambassador of peace, a man of action, and a great theologian, proclaimed Doctor of the Church by John XXIII 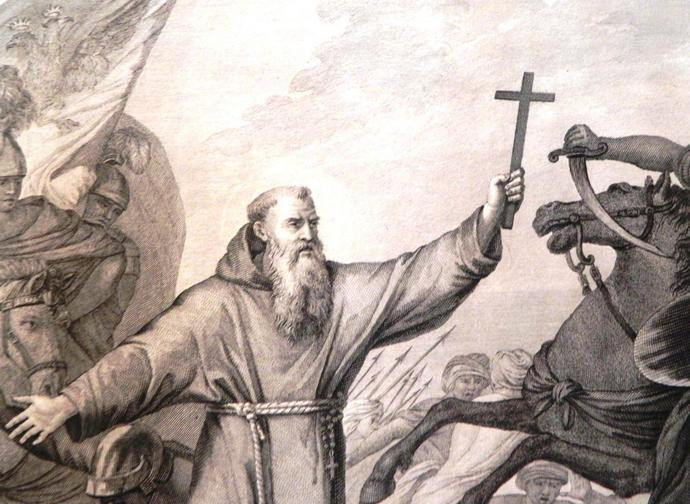 Saint Lorenzo da Brindisi (1559-1619) was together an ambassador of peace, a man of action, and a great theologian, proclaimed Doctor of the Church by John XXIII. He did not shirk the challenges of his time. He even went to the battlefield, where he spiritually led Christian troops to the liberation of the Hungarian city of Albareale (Szekesfehervar), then occupied by Muslims.

Baptized with the name of Julius Caesar, he lost his father in childhood, killed in a raid by the Turks on Apulian soil. During his early adolescence he had also lost his mother. Now devoid of his closest affections, he studied in his hometown with the Conventual Franciscans, who, according to the institute's custom, made him preach as a child in special celebrations. He then moved to Venice with an uncle who was a priest. When he was 15 and a half, he donned the habit of the Capuchins and took the name Brother Lorenzo.

He studied philosophy, logic and theology. He showed great talent in languages and a profound knowledge of the Holy Scriptures, which he learned in Hebrew, Greek and Latin. Protestantism was by then widespread in Europe, and the saint, ordained a priest at the age of 23, used his solid training to refute heresies, especially those of Lutheran origin. At that time the whole Church was in ferment to follow up the Tridentine decrees. The many commitments arising from the tasks gradually entrusted to him within the Order led him to establish houses in Graz, Madrid, Munich, Prague, Vienna, as well as taking care of the sick and especially plague victims. Father Lorenzo never failed to celebrate Holy Mass piously: the mystery of Christ's sacrifice, perpetually renewed in the Eucharist, led him to such emotion that sometimes three hours passed before the final blessing to the faithful, after tears, ecstasy and other mystical phenomena.

His love for the Eucharist and most tender devotion to the Blessed Virgin were the sources of his holiness, as well as the constant themes of his preaching. For his Marian and other writings on Our Lady, anchored in biblical passages and Tradition, he was called “the most important Mariologist of his time”. Doctor Apostolicus underlined the role of the Mother at the side and in the service of the Divine Son, as mediatrix of every grace and Co-Redemptrix. “How can we imagine a star in the firmament or a sun without the power to communicate its light?” he wrote, meditating on the Virgin, the full of grace “filled with all bliss”, which consists “in the possession and enjoyment of all good and, to a great extent, in communicating the same good to others”.

While the Austro-Ottoman war (1593-1606) was underway on the soil of the Danube region of Europe, Pope Clement VIII and the Emperor Rudolf II asked for Lorenzo's help. The aim was to convince the German princes to unite against the Turks, who years after the defeat of Lepanto continued their expansionist plans on the Old Continent. In 1600 Sultan Mehmet III, notorious for having his 16 brothers killed, had declared that he would turn the altar of St. Peter's into a trough for his horses. The saint not only engaged in preaching during the crusade but also asked to be one of the chaplains dedicated to the spiritual assistance of the soldiers.

During the victorious battle of Albareale, in 1601, Lorenzo was miraculously unscathed, though riding at the front of the army, carrying a large crucifix to lift the spirits of the Christian troops, who were grossly outnumbered by the Turks. He attributed the merit of the victory to God and to Our Lady, to whom he had addressed intense prayers. The following year he was elected vicar-general of the Capuchins. He held the office for three years, then refused re-election and continued to be engaged in various missions. He completed his last mission in1619, when he died in Lisbon, after having exposed to the Spanish King Philip III the problems that afflicted his subjects in the Kingdom of Naples.