The figure of Saint Lawrence (†258), deacon and martyr, has over the centuries been a source of inspiration for artists and poets, from Titian to Giovanni Pascoli, and an object of great devotion among the faithful. 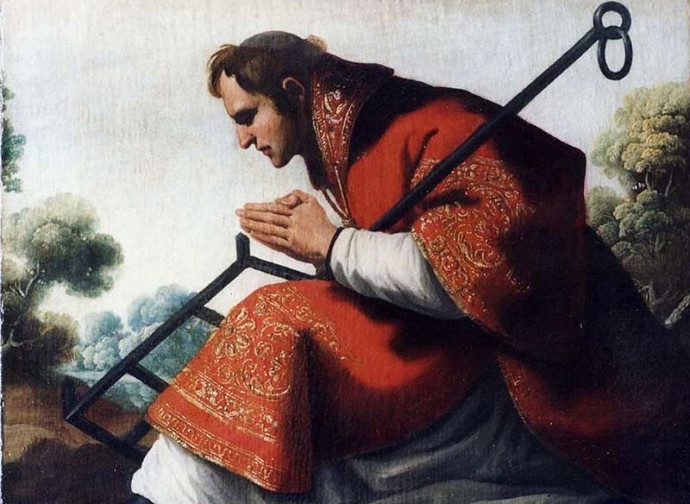 The figure of Saint Lawrence (†258), deacon and martyr, has over the centuries been a source of inspiration for artists and poets, from Titian to Giovanni Pascoli, and an object of great devotion among the faithful.

Tradition reports that he was born in Huesca, Spain. After his theological studies he moved to Rome, distinguishing himself for his great sense of the sacred and his charity. Sixtus II, elected to the papal throne on 30 August 257, appointed him archdeacon, a figure who was in charge of the diocesan administration, coordinated the activities of the other deacons, and helped widows, the poor and the sick. Valerian reigned over the empire; in the middle of the summer of 258 he issued his second edict against Christians, aimed in particular at attacking the clergy, as Saint Cyprian of Carthage, martyred in September of that same year, wrote in a letter: “The emperor Valerian sent his rescript to the Senate with which he decided that bishops, priests and deacons be immediately put to death”.

The imperial edict was immediately executed in Rome, where on 6 August the soldiers surprised Sixtus II while he was celebrating the Eucharist in the catacombs of St. Callistus and on the same day beheaded the Holy Father and six deacons (Januarius, Vincent, Magnus, Stephen, Felicissimus and Agapetus, the last two buried in the nearby catacombs of Pretestato). Of the entire deacon's college of Rome, only Lawrence remained alive, spared because the emperor expected him to hand over the treasures of the Church, with the promise to save his life. It is said that the archdeacon then gathered a large group of needy people in front of Valerian and said to him: “Here are our treasures, you can find them everywhere”. In prison he comforted, baptized and gave sight to a prisoner named Lucillus, also becoming the cause of conversion for the centurion Hippolytus, struck by both the prodigy and the serenity of the saint.

His martyrdom took place on 10 August. Lorenzo was burned alive on the grill, as narrated in an ancient Passio reproduced by Saint Ambrose (340-397) in De officiis ministrorum, which also reports his humour at the moment of the supreme trial: “Look, I am well-cooked on this side; turn me over”. Saint Damasus (304-384) dedicated a famous epigram to him, recalling in simple words (verbera, carnifices, flammas, tormenta, catenas...) how the whips, the executioners, the flames, the torments and the chains had had no power over his fidelity to Our Lord. The martyr, who according to tradition was 33 years old, was buried along the Via Tiburtina, near the Campo Verano. A few decades later, in the middle of the Pax Constantiniana, the basilica of San Lorenzo fuori le Mura (Basilica of Saint Lawrence outside the Walls), the first of about thirty churches built over time in Rome in his honour, was erected on the site of his tomb. According to tradition, also originating in the 4th century are San Lorenzo in Fonte (place of imprisonment) and San Lorenzo in Panisperna (place of martyrdom) whose name derives from the custom of distributing panis et perna, i.e. bread and ham, to the poor every 10 August, in memory of the saint.

The date of 10 August already appeared in the Depositio Martyrum, written around 336, confirming the antiquity of the cult of Saint Lawrence, who represents the perfect model of the deacon. This term derives from the Greek and means “servant”: it therefore recalls the teaching of Christ that the saint incarnated in his life. His name was included in the Roman Canon, the oldest Eucharistic prayer in use in the Church of Rome and still the main one today, which recalls Lawrence in the part that celebrates the triumphant Church. As Saint Augustine said: “Today the Church of Rome celebrates the day of Lawrence's triumph, the day on which he rejected the world of evil. He trampled on it when it angrily inflicted cruelties on him and despised it when it enticed him with its flattery. In one case and another he defeated Satan, who stirred him against the persecution. […] He was a minister of the blood of Christ, and there, in the name of Christ, he shed his blood. He loved Christ in his life; he imitated him in his death”.