He was a father to prisoners and convicts awaiting execution, showering them with love, inducing them to reconcile with God. He trained priests and saints, including St John Bosco who had him as spiritual director for 25 years and called him “model of priestly life”. 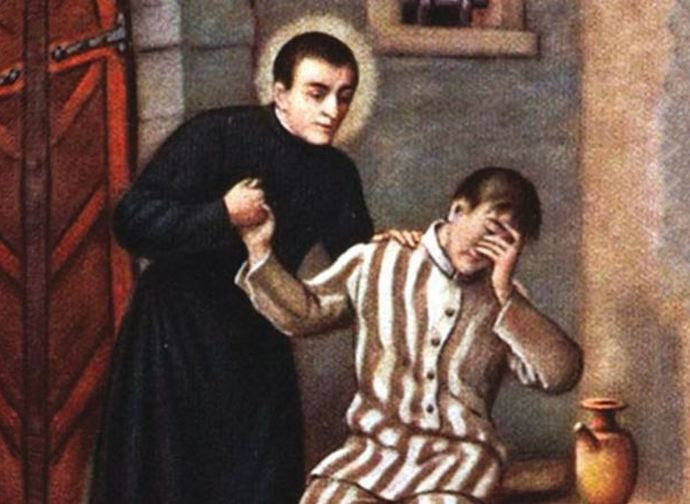 He was a father to prisoners and convicts awaiting execution, showering them with love, inducing them to reconcile with God. He trained priests and saints, including St John Bosco who had him as spiritual director for 25 years and called him “model of priestly life”. Don Joseph Cafasso (1811-1860) was one of those giants of holiness who illuminated nineteenth-century Turin, full of social problems, striving to do everything “that can contribute to the greater glory of God and to the benefit of souls”.

The third of four children, Joseph was born in 1811 in Castelnuovo d'Asti (today Castelnuovo Don Bosco), the same village that four years later saw the birth of John Bosco (1815-1888), who wrote his first biography. With a frail physique but animated by a great faith, he studied philosophy and theology in Chieri. At only 22 he was ordained a priest. From that moment on he dedicated himself entirely to the priestly ministry so that the highest dignity conferred on him by Christ should shine.

He taught that the priest, as a figure of the Good Shepherd, has the duty to be a saint to guide to sanctification the souls entrusted to him by God. For this reason he said: “It is a great shame for us when a priest allows himself even to be equalled in virtue by a layman. What a disgrace for us!” Shortly after his ordination he met Don Luigi Guala, a theologian of Ignatian Spirituality, who welcomed him to the Ecclesiastical College-Residence for Clerics of St. Francis of Assisi (in Turin), the place where the most remarkable part of Don Cafasso's work took place, first as a simple student, then as a teacher and finally, for 24 years, as rector. This is what Benedict XVI said in a catechesis on the saint: “From his chair of moral theology he taught them to be good confessors and spiritual directors, concerned for the true spiritual good of people, motivated equally by a desire to make God's mercy felt, and by an acute and lively sense of sin”. In the words of his disciple Don Bosco: “At the College one learnt to be a priest”.

This charity towards his neighbour resulted in the many hours he dedicated to the sacrament of Confession. It was a charity continually enlivened through prayer, the devotion with which he celebrated the Eucharist, the love for Our Lady, whom he called “our dear Mother, our consolation, our hope”. From his friendship with Jesus and Mary came the virtue of penetrating deeply into man's heart; this was appreciated by the detainees held in the notorious prison located in the Senate building, where he sometimes spent the whole night. In Piedmont, at that time the scene of the Risorgimento uprisings and the growing anti-Catholic feeling of the elite, which with the Rattazzi Law led to the abolition of various religious orders, Don Cafasso brought the love of Christ to the lowest. He wanted to alleviate their sufferings and lead them to a radical conversion, worthy of Paradise, like that of Saint Dismas, the Penitent Thief crucified with Jesus.

Many converted, even shortly before they were hanged, convinced that this extraordinary paternal love, enclosed in a rickety body (“he was almost just voice”, said Don Bosco), should have an even greater source. “The Priest of the Gallows”, as he was called, accompanied 57 men condemned to death to the gallows, confessing them and administering the Blessed Sacrament. On his deathbed this most humble priest said: “Once I am down in my tomb, I desire and pray the Lord to make my memory perish on earth, so that no one will ever think of me again, apart from those prayers that I await from the charity of the faithful. And I accept in penance for my sins everything that will be said against me in the world after my death”. Our Lord called him to Himself when he was 49 years old, but He had different plans than the oblivion invoked by His saint. Pius XI called him one of the “new stars” of the Church, comparing him to the Curé d'Ars, Saint John Mary Vianney (1786-1859). And Pius XII, in Menti Nostrae, urged priests to model themselves on the example of Saint Joseph Cafasso.