“Either we know how to find the Lord in our ordinary life, or we will never find Him,” taught Saint Josemaria Escrivá (1902-1975). The founder of Opus Dei (Work of God) had the merit of remembering that all men are called to holiness, which can be achieved first of all through the sanctification of daily work. 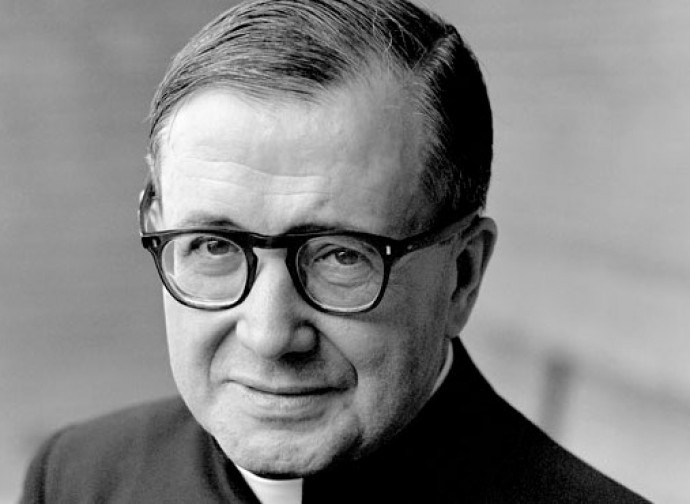 “Either we know how to find the Lord in our ordinary life, or we will never find Him,” taught Saint Josemaria Escrivá (1902-1975). The founder of Opus Dei (Work of God) had the merit of remembering that all men are called to holiness, which can be achieved first of all through the sanctification of daily work.

The second son of six children, he was born in Barbastro (in northern Spain) to a textile merchant and a housewife, who gave him a solid Christian education. Josemaria was able to face the sorrows of his childhood, during which he saw three sisters die in rapid succession, and his father lose his job. Between the ages of 15 and 16, after observing the footprints left on the snow by a barefoot Carmelite (“others make many sacrifices for God and neighbour, and I won't be able to offer him anything?” he asked himself). He prophesied that God was calling him to a particular mission and decided to begin the path to priesthood.

He was ordained at the age of 23, but three more years passed before the divine plan for him was clear: on October 2, 1928, following a mystical inspiration, Opus Dei was born. The foundation of Opus Dei, as the saint wrote, was to ensure that “Christians inserted into the connective tissue of civil society - with their family, friends, professional work and noble aspirations - understand that their life, as it is, can be an opportunity for an encounter with Christ, and is therefore a path of holiness and apostolate”. He therefore gathered around him many lay people, eager to live their vocation in the world. In 1930 he founded the female branch. With the outbreak of the Spanish Civil War (1936-1939) the anarchist-communist front, in hatred of the faith, killed about 6,800 Catholics, including religious and lay people. Josemaria was forced first to exercise the priestly ministry clandestinely and then to leave Madrid with false documents.

After the conflict ended he was able to resume the expansion of his institute, whose symbol is a cross inscribed on a globe, a sign that the light of Christ must be carried everywhere. “The Cross must also be raised in the guts of the world. Jesus wants to be lifted up there: in the clatter of factories and workshops, in the silence of libraries, in the commotion of streets, in the quiet of fields, in the intimacy of families, in assemblies, in stadiums... Wherever a Christian can spend his life honestly, he must place with his love the Cross of Christ, who attracts all things to Himself”. The symbol of Opus Dei was suggested to him by a vision he had on 14 February 1943, while celebrating Mass. It made him realize the solution he had long sought for priests willing to live the spirit of his institute. In the same year he founded the Priestly Society of the Holy Cross, through which he was able to incardinate the lay members of the Work who received ordination and then also the diocesan priests.

In 1946 he moved to Rome, from where he continued to promote the expansion of Opus Dei in the world, always with good humour and the ability to connect with people's hearts. He was also a prolific author. His most famous work, entitled The Way, which has been translated into 43 different languages and sold almost five million copies to date, contains 999 ideas for meditation. These suggestions are divided into chapters ranging from character to supernatural life, from the Love of God to the Virgin and to perseverance. He wrote in the prologue: “Read this advice slowly. Meditate calmly on these considerations. They are things that I whisper in your ear, in the confidence of a friend, a brother, a father. And God listens to these confidences [...]”.