The name of St. Jane Frances de Chantal (1572-1641) is linked to that of St. Francis de Sales (1567-1622) for the spiritual bond that was established between these two blessed souls, who co-founded the Order of the Visitation. 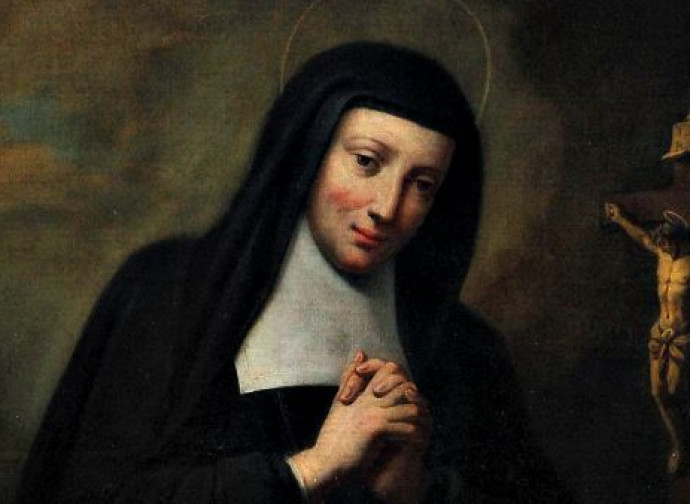 The name of St. Jane Frances de Chantal (1572-1641) is linked to that of St. Francis de Sales (1567-1622) for the spiritual bond that was established between these two blessed souls, who co-founded the Order of the Visitation. Jane, born in Dijon into a family of the high French nobility, lost her mother when she was just 18 months old. Her education was taken care of by her father, Benigno Frémyot. At the age of twenty she married a man of faith called Christopher, Baron de Chantal, with whom she lived a happy marriage. She gave birth to six children, though her first two died at birth, preceding her to Heaven. Even during her marriage Jane was devoted to charity, which reached its peak during the famine that struck Burgundy at the end of 1600. In full agreement with her husband, she transformed her manor into a hospital and had a new oven built to provide bread for the needy.

Her biggest trial was just around the corner. During a hunt, her husband received a blunderbuss wound to the thigh, accidentally shot by a cousin. “Lord, take all I have in the world, but spare me my dear husband,” she prayed. The good Christopher returned to God eight days after the accident, forgiving his involuntary killer from the heart. It was 1601; Jane at only 29 years old was already a widow, with four children to raise. Inconsolable, she could not forgive the man who had taken away her dearest love. One day her father invited her to Dijon to listen to the visiting bishop of Geneva, formerly a stronghold of the Calvinists, Francis de Sales. On March 5, 1604 the first meeting between the two took place, and from then on the saint took on the spiritual guidance of Jane, which was mainly in the form of an intense exchange of letters.

The first visible grace was that Jane finally found the strength to meet her husband's cousin: she forgave him, which was greatly beneficial for her progress. Forged in sorrow, she became steadfast in the paths of sanctification, understanding the beauty of having God as the only and supreme end: “All that has been created down here means nothing to me compared to my dearest Father [...]. One day you commanded me to detach myself and to strip myself of everything. Oh God, how easy it is to leave what is around us, but to leave one's skin, one's flesh, one's bones and penetrate into the heart of the marrow, which, it seems to me, is what we have done, is a great, difficult and impossible thing if not by the grace of God”, she wrote to her spiritual director in one of her many letters, which she also sent to her children, her friends, and her nuns, as mother and spiritual mother.

After providing for her children, on 6 June 1610, the feast of the Most Holy Trinity, Joan began her communal life in Annecy together with two companions. The following year they made their first vows in the presence of St. Francis of Sales: these were the beginnings of the Order of the Visitation (canonically erected in 1618), which was called this in memory of the solicitous charity the Virgin had shown when she visited her cousin Elizabeth. Its aim was, in fact, to feed on divine love in contemplation and then to visit the poor and the sick. She also welcomed as nuns sickly and elderly women. According to the ecclesiastical norms of the time, the order became cloistered, with the prevalence therefore of the contemplative purpose, which would be perfectly incarnated in that same century by Saint Margaret Mary Alacoque (1647-1690), the mystic of the Visitation Order who propagated devotion to the Sacred Heart of Jesus.

Already in 1633, another distinguished “duo” of French saints, Louise de Marillac and Vincent de' Paul, founded the Daughters of Charity, the first female institute for home care of the poor and sick, a solemn confirmation of the extraordinary work of Providence. Returning to Jane, she was not spared more bereavement: only one of her two remaining daughters survived. In 1622, when the Order already had 13 monasteries, Francis de Sales also died. Left alone at the head of the Order, Jane travelled far and wide in France. She founded convents everywhere (there were 87 at her death) and gained the public admiration of Charles IV of Lorraine, who called her “the saint of our century”.