He was called the Athanasius of the West because, similarly to the great Bishop of Alexandria of Egypt, Saint Hilary of Poitiers (ca. 310-367) dedicated his whole religious life to the defence of Christ true God and true man. 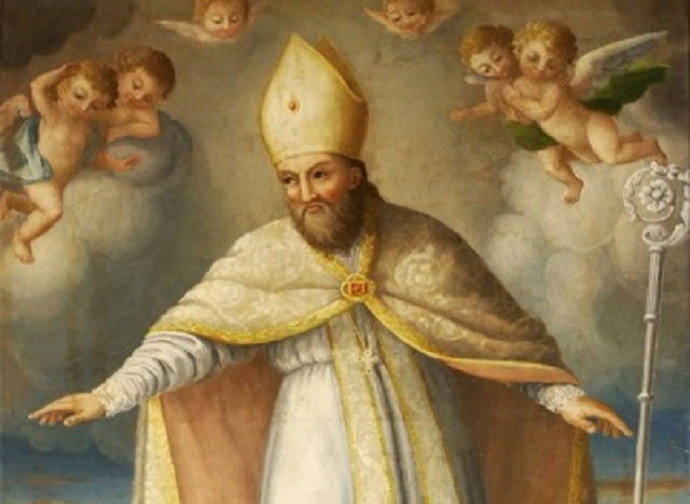 He was called the Athanasius of the West because, similarly to the great Bishop of Alexandria of Egypt, Saint Hilary of Poitiers (ca. 310-367) dedicated his whole religious life to the defence of Christ true God and true man. Like Athanasius, in fact, Hilary had to face persecution, since the Arian heretics, who denied the divinity of the Son, had the support of the Emperor Constantius. Moreover, Christianity had been a discovery to Hilary. Born into a wealthy, probably pagan, family, he had studied rhetoric, had taken a wife and had a daughter. His Catholic faith, as he would write later, had slowly welled up within him with the realisation that no philosophy could help him find the meaning of mankind and his ultimate goal, which he only discovered in the Bible, particularly the prologue of John's Gospel with its reflection on the Word become flesh that "gave power to become children of God" to those who would believe in Him.

He was baptized around 345 and about eight years later became bishop of Poitiers: fame as a shepherd of souls and his preaching attracted, among others, Saint Martin of Tours, who became his disciple. Because Hilary had immediately defended the Nicene Creed (where Arianism had been declared heretical) and excommunicated the Arian bishops who had condemned Athanasius, the heretics met in 356 in Béziers, in what the saint called "the synod of false apostles", and asked the emperor to exile Hilary, who was therefore forced to go to Phrygia.

Seeing how widespread the heresy was in the East, he undertook to write his most famous treatise, De Trinitate, in which he produced a profound theological account of the Trinitarian mystery, starting from the command of Christ at the end of Matthew's gospel ("make disciples of all nations; baptise them in the name of the Father and of the Son and of the Holy Spirit") to demonstrate the consubstantiality between the three Persons of the Holy Trinity, which he corroborated with examples taken from the Church Fathers and various other quotations from the New and the Old Testament. Dwelling on chapter 8 of the Book of Proverbs, he explained the hymn to Wisdom, that is, to Christ, by saying that the divine names are not random and the Father is such as Father of the eternal Son.

Eventually, it was the Eastern Arians themselves, unable to counter the unassailable theses argued by Hilary, whom they called a "sower of discord and disrupter of the East", to plead with Constantius to repatriate him. The saint returned to Poitiers around 360, welcomed in triumph by the people and joined by Martin, who founded a monastery in nearby Ligugé and helped him in the defence of orthodoxy. At the same time, the Paris synod, based on the Nicene doctrine, deposed the Arian bishops; this turning point was largely due to Hilary's fortitude and amiability, as he showed understanding towards the brethren who, after having accepted compromise formulas out of ignorance or fear, had later recognised their mistake. Constantius' death in 361 was another blow to Arianism, because several Catholic bishops who had been removed from their seats were now able to resettle.

Proclaimed Doctor of the Church in 1851 by Pius IX, Hilary is also the first Latin writer whose hymns are known. He composed them to instruct the faithful in the Christian doctrine. He wrote a treatise on the Psalms, explaining that everything that is said there "refers to the coming of our Lord Jesus Christ", our way to salvation: "Through the relationship with his flesh, access to Christ is available to all, as long as they put off their old selves and nail it to His cross; as long as they abandon their old deeds and convert, to be buried with Him in His Baptism, in order to live.”