Felix († 14 January, after 250) was born in Nola to a wealthy Syrian who was there on business. After the death of his father, he sold most of his assets and distributed the proceeds to the poor, consecrated himself to Christ as a priest and became a collaborator of Bishop Maximus. 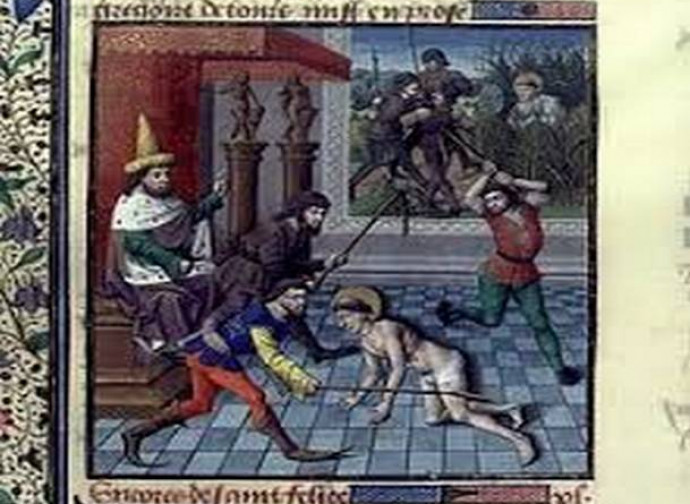 "O martyr Felix […] by effective works of salvation you scattered the first seeds of the heavenly goods into me, in the hope that I could attain them", wrote Saint Paulinus of Nola (355-431) in one of the 14 "birthday poems" survived, so called because they were written from year to year to mark the birthday of Saint Felix of Nola († 14 January, after 250), to whose intercession he attributed the beginning of his own conversion. Paulinus was originally from Bordeaux and had initially lived as a senator in Nola, settling there around 394, shortly after his ordination as a priest. His poems represent the first written documents witnessing to the Nolan oral tradition, about Felix.

Felix was born in Nola to a wealthy Syrian who was there on business. After the death of his father, he sold most of his assets and distributed the proceeds to the poor, consecrated himself to Christ as a priest and became a collaborator of Bishop Maximus. A strenuous defender of Christians, the elderly and sick, Maximus escaped persecution (Paulinus' account is compatible with Diocletian's persecutions of 303-305) by taking refuge on a mountain, while entrusting the care of the diocese to Felix, his intended successor. Felix was imprisoned and subjected to severe torture, but he refused to make sacrifices to the pagan gods and reaffirmed his Christian faith. An angel freed him and led him to the place where, alone and exhausted by hardship, Maximus had taken refuge. Felix refreshed him with the juice from grapes miraculously ripened out of season and, by carrying him on his shoulders, took him back to the city, where the old bishop was entrusted to the care of a Christian woman and died some time later.

Felix escaped another arrest by taking refuge in an abandoned cistern, where for six months he was fed by a woman. At the end of the persecutions, when the people claimed him as their new bishop, he refused the episcopate in favour of Quintus, renounced his right to recover his confiscated property and spent the rest of his days in poverty and prayer. The exact year of his death is unknown, but he was venerated ever since as a martyr (the current Martyrology remembers him as an "undefeated confessor of the faith") for the way in which he had accepted continual suffering, remaining steadfast in Christ. Because of his exemplary life, he died in fame of sanctity and his tomb, in nearby Cimitile, a source of miracles, was called Ara Veritatis because of his effective triumph of truth over false testimony.

Since the small shrine erected over his tomb attracted so many pilgrims, at the beginning of the 5th century Paulinus had a new basilica built in his honour to welcome the large crowds who came to pray. Over the centuries, five more basilicas arose in the same place, making Cimitile (whose name derives from 'Cimiterium'), one of the most important early Christian sites in Italy.

The saint commemorated today should not be confused with a 1st-century saint and bishop of the same name.