She was among the highest examples of Christian charity, which she exercised to the point of begging for the poor and the sick. In her short but very intense earthly life, Saint Elizabeth of Hungary (1207-1231) was a princess, bride, mother of three children, widow, and Franciscan tertiary. 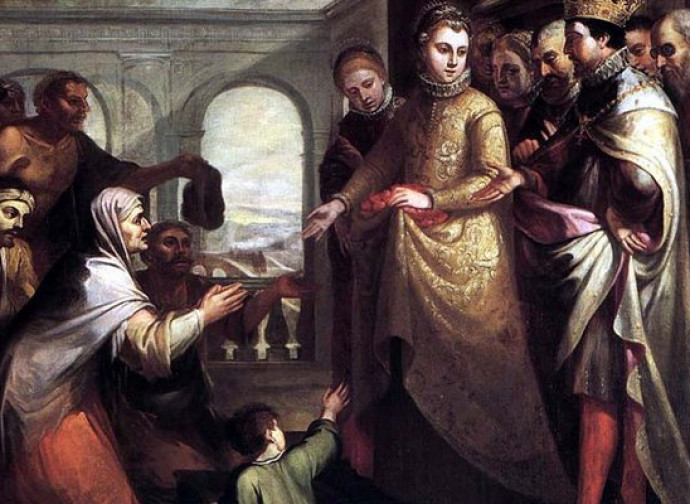 She was among the highest examples of Christian charity, which she exercised to the point of begging for the poor and the sick. In her short but very intense earthly life, Saint Elizabeth of Hungary (1207-1231) was a princess, bride, mother of three children (including Blessed Gertrude of Altenberg), widow, and Franciscan tertiary.

Daughter of the King of Hungary Andrew II, she was married at the age of fourteen to the Landgrave of Thuringia, Ludwig IV. It was a marriage previously arranged by the two families to consolidate their alliance, however it was still a happy marriage. “If I love a mortal creature so much, how much more should I love the Lord!” the saint used to say. She was soon attracted by the example of her contemporary, Francis of Assisi, whose teaching she learned through the friars who arrived in Thuringia in 1223. She gave herself enthusiastically to charity. “Some she fed, to others she gave a bed, others she carried on her shoulders, always doing her utmost, but without getting into conflict with her husband”, revealed Conrad of Marburg, who became her confessor. Her husband, who appreciated those good works and believed in eternal reward, died suddenly of a fever while waiting to embark on the Sixth Crusade.

When Ludwig died she was only twenty years old. She then took solemn vows similar to those of a nun, resisting the attempts of some family members who tried to make her remarry. She decided to die to the world to follow in every way the will of God, whom she now loved with all her heart. In the end she went to live in Marburg, where she had a hospital built at her own expense for the needy, and also pledged the dowry that had been returned to her in the meantime. She took on the humblest jobs to serve the poor and the sick. For her support to the friars present in Thuringia, Francis of Assisi himself sent her a message full of blessings. As one of the first Franciscan tertiaries, she was now a princess for the last. And when she died, at the age of 24, the people found it normal to already consider her a saint.

The fame of sanctity that surrounded her was enhanced by miracles performed during her life (the best known, reported by tradition, is the transformation into roses of the loaves that she hid under her mantle to take them to the poor). Gregory IX immediately opened an enquiry into her virtues and within only four years Elizabeth was canonised. Several congregations are named after her, which continue her work of dedication to the sick.