The King of East Anglia, according to tradition was crowned by Bishop Humbertus of Elmham on 25 December 855, when he was still an adolescent. The most famous hagiography is the Passio Sancti Eadmundi written by Saint Abbo of Fleury (945-1004), who dedicated his work to Saint Dunstan of Canterbury (909-988). 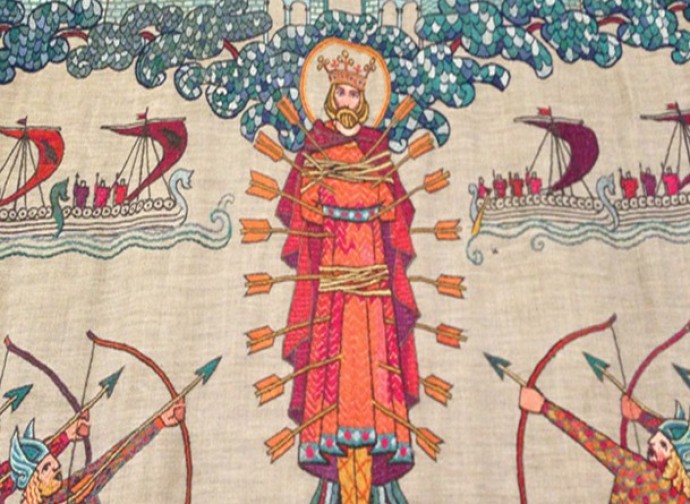 England is full of churches dedicated to Saint Edmund (c. 841-870) and frescoes of his martyrdom during its occupation by the Danish Grand Army. The King of East Anglia, according to tradition was crowned by Bishop Humbertus of Elmham on 25 December 855, when he was still an adolescent. He was a righteous king who, during the winters, had food taken from the royal pantries to donate to his subjects. When he had to face one of the many Viking invasions, he refused to accept a treaty that was burdensome for his people and that would have involved the abandonment of the Christian religion.

The most famous hagiography is the Passio Sancti Eadmundi written by Saint Abbo of Fleury (945-1004), who dedicated his work to Saint Dunstan of Canterbury (909-988). The latter, in turn, had learned about the martyrdom from an elderly eyewitness, the man who had carried the martyr's sword on that day. In his detailed chronicle, St Abbo reports that the pagans, supported by a numerically superior army, beat and wounded Edmund. Then they tied him to a tree and whipped him, while the saint “continuously proclaimed the true faith in Christ. Then the pagans raged because of his faith, because he kept asking for Christ's help. They struck him with javelins for their amusement, until he was riddled with them, like a porcupine, as had been the fate of [Saint] Sebastian”.

This was followed by the beheading of Edmund, whose remains were recovered by the Christians. In the 11th century his relics were moved to a church in the town known today as Bury St Edmunds, which became a place of pilgrimage and the recipient of donations from various kings of England. Of particular note is the pilgrimage of Canute the Great, a Scandinavian king who converted to Christianity, who in 1020 placed his crown on the reliquary of St Edmund as atonement for the sins of his ancestors. The same reliquary was destroyed in 1539 following the Anglican Schism, during the suppression of the monasteries ordered by King Henry VIII.