Benedict XVI called him “one of the Fathers of Europe”, because the life of Saint Colomban (543-615) recalls in an exemplary way the Christian roots of the Old Continent. He and his monks proclaimed the Gospel and had a profound impact on European culture through the work of the various monasteries founded in different countries. 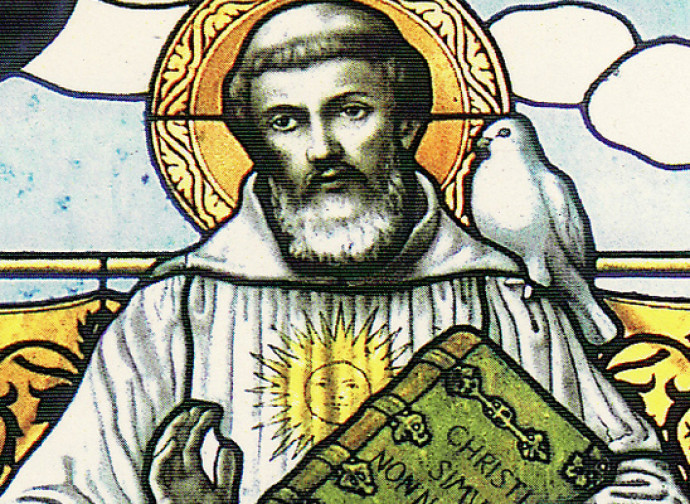 Benedict XVI called him “one of the Fathers of Europe”, because the life of Saint Colomban (543-615) recalls in an exemplary way the Christian roots of the Old Continent. He and his monks proclaimed the Gospel and had a profound impact on European culture through the work of the various monasteries founded in different countries. Aware of these common roots, today denied by the dominant relativism, the Irish saint was the first to use the expression totius Europae (“of all Europe”) in a letter to St Gregory the Great, referring to the presence of the Church on the continent.

His monastic vocation led him to leave his family at the age of 15, despite his mother’s attempts to stop him. “He who loves his father and mother more than me is not worthy of me”, Colomban told her, already determined to be a pilgrim for God. He trained at Cleenish Island Monastery and then moved to Bangor Monastery, where there was a strict asceticism under the guidance of Abbot Comgall: the monks' life was marked by prayer, corporal mortification and work, including the study of parchments and ancient codices. Around the age of fifty, after overcoming the resistance of Saint Comgall, who hoped that Colomban would be his successor, he left his homeland together with 12 other monks, all animated by the Irish ideal of the peregrinatio pro Christo.

Colomban felt the missionary urgency to evangelise the European regions, in several of which paganism had reappeared due to the continual migrations from the North and East. He founded one monastery after another. He often recovered old ruins, as in present-day Luxeuil (in France), an ancient spa town that had fallen into ruin and that he and his companions turned back into a vibrant centre, which revolved around the abbey, in a similar way to what happened later in Bobbio. Those monasteries were also built to respond to the numerous vocations attracted by the example of the monks. The faithful went there both to receive spiritual help and for practical advice, for example on how to cultivate and plough the land.

It was these monasteries that instituted the scriptoria, rooms where manuscripts were copied and thus proved to be fundamental in the transmission of religious books and texts from Greek and Latin antiquity. Alongside penance and prayer, the Rule of St Colomban (in time assimilated to the Benedictine Rule) provided for daily reading and writing as a means of uplifting the spirit, a clear sign of the very close link between faith and culture.

He gave great importance to the Sacrament of Reconciliation. He introduced in the continent private and repeated confession and penance, known as the “tariff” for the proportion established between the gravity of sin and the penance ordered by the confessor. His moral rigour made him reject compromise. He rebuked the customs of some rulers (who had him arrested) and also of members of the clergy. He was moved by the awareness that only in fidelity to God can the soul achieve happiness for itself and one’s neighbour: “If man will use righteously those faculties which God has granted to his soul, then he will be similar to God. Let us remember that we must return to Him all those gifts that He deposited in us when we were in our original condition. He taught us the way with His commandments. The first of them is to love the Lord with all our hearts, because He first loved us”.