"I will send you a faithful servant of mine and perfect friend," Jesus had promised Margaret Mary Alacoque, then going through a difficult time because the authenticity of her visions of the Sacred Heart was not believed. That God-sent friend was Claude de la Colombière (1641-1682), superior of the Jesuit house in Paray-le-Monial from 1675. 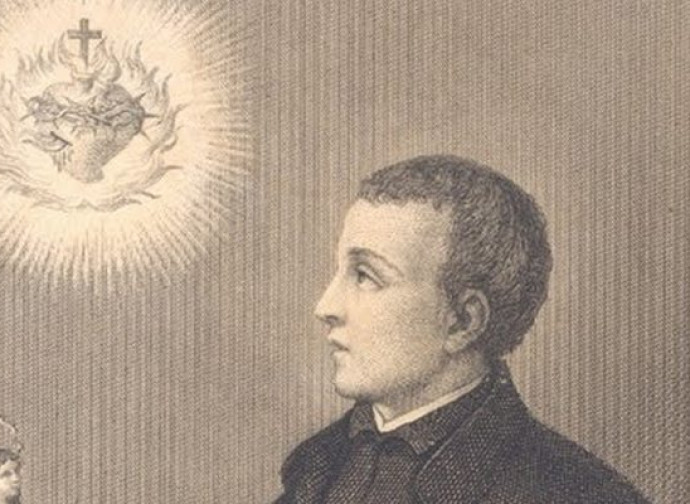 "I will send you a faithful servant of mine and perfect friend," Jesus had promised Margaret Mary Alacoque, then going through a difficult time because the authenticity of her visions of the Sacred Heart was not believed. That God-sent friend was Claude de la Colombière (1641-1682), superior of the Jesuit house in Paray-le-Monial from 1675: he became the confessor of the nearby Visitation monastery, where Margaret was living. He had recently professed his solemn vows, at the end of the Third Probation set by Saint Ignatius of Loyola. Thus he wrote during his spiritual retreat: "I ask God to reveal to me what I need to do to serve Him and purify myself".

The third of six children, four of whom would choose the religious life, Claude was born in a French village to a deeply religious family. At 17 he moved to Avignon to begin his noviciate in the Society of Jesus, amid a series of emotional ups and downs. He would later write: "Jesus Christ promised one hundred in exchange for one, and I can say that I have never done anything without having received, not a hundred in exchange for one, but a thousand times more than what I had abandoned". His talent prompted the superior general to send him to study theology in Paris, where, thanks to his intellectual and moral qualities, he was recommended to Colbert, the economist and then finance minister (under Louis XIV) who hired him as a tutor for his children. Meanwhile, Claude fought against his own selfishness, continually offering himself to God.

After taking holy orders, Claude completed the Ignatian journey in Lyon and made solemn vows on February 2nd, 1675. His superiors assigned him to Paray-le-Monial, precisely because they knew about the visions of Margaret Mary Alacoque (1647-1690) and believed that the pious and prudent Claude would be the right person to deal with that delicate situation. When he arrived, Margaret heard an inner voice: "That's the one I'm sending you!" The Jesuit became her spiritual father and saw that the young nun had been granted authentic mystical gifts. During a mass, she saw the Sacred Heart as a burning furnace in which Claude's heart and her own were immersed: "It is thus my pure love – said Jesus – unites these three hearts forever". “This union – says Saint Margaret Mary – was all for the glory of his Sacred Heart, and that He desired that I reveal to [Claude] its treasures, so that he might make known and publicise its worth and utility, and to that end He wished that we be like brother and sister, sharing equally in these spiritual riches.”

Claude humbly accepted every revelation concerning himself and worked tirelessly, both writing and preaching to spread the devotion to the Sacred Heart of Jesus, and asked Margaret to write down her mystical experiences. He saved many souls from the dangers of the Jansenist heresy (which was discouraging the practice of the sacraments) and was unflinching in the face of the troubles he had been foretold, since the Lord had said to Margaret: "Turn to my servant Claude and tell him [...] that those who mistrust themselves to trust in Me alone can be almighty". After 18 months in Paray, he received orders to leave for London as chaplain to the Duchess of York, Mary Beatrice of Modena, a fervent Catholic.

In England too he worked wonders, converting many to the Catholic Church. It was at that time that the Protestant Titus Oates lied about a "papist conspiracy" against the king, which Parliament gave credit to: so many innocent Catholics were sentenced to death and Claude was arrested for "religious proselytism". Four years earlier he had seen himself, "covered with irons and chains, dragged to prison, accused and condemned for preaching Christ crucified". His time in jail severely undermined his health, already weakened by incipient tuberculosis. He was eventually freed by the intervention of Louis XIV and could return to Paray-Le-Monial, where he died on February 15th, 1682. To those who mourned him, Saint Margaret said: "Stop grieving. Invoke him with all your confidence, for he can help us".

Further readings:
The practice of the first Friday of the month