“No one can attain bliss unless he transcends himself, not with the body, but with the spirit. But we cannot rise by ourselves except through a higher virtue. Whatever the inner dispositions, these have no power without the help of Divine Grace. But this is granted only to those who ask for it [...] with fervent prayer. Prayer is the beginning and the source of our elevation”. So wrote saint Bonaventure of Bagnoregio (c. 1217-1274) in one of his masterpieces. 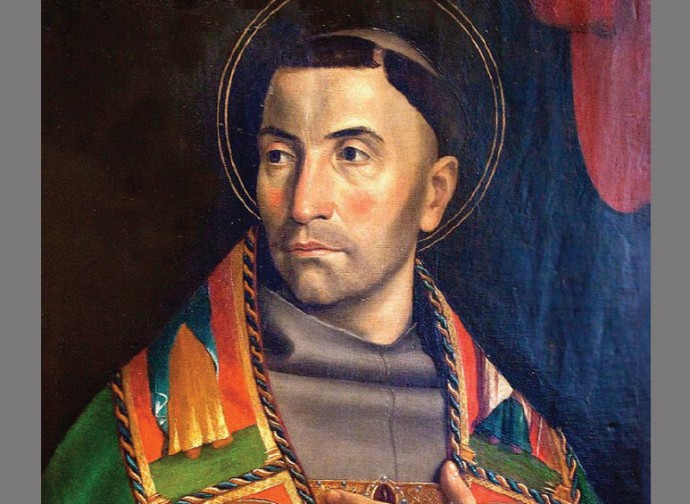 “No one can attain bliss unless he transcends himself, not with the body, but with the spirit. But we cannot rise by ourselves except through a higher virtue. Whatever the inner dispositions, these have no power without the help of Divine Grace. But this is granted only to those who ask for it [...] with fervent prayer. Prayer is the beginning and the source of our elevation”. So wrote saint Bonaventure of Bagnoregio (c. 1217-1274) in one of his masterpieces, The Journey of the Mind into God (Itinerarium mentis in Deum). Together with his friend the Dominican saint Thomas Aquinas, he was one of the great protagonists of 13th century philosophical and theological thought, when the Christian faith showed all its capacity to influence culture.

His baptismal name was John, like that of his father, a doctor. His mother was very devoted to saint Francis (1181-1226). When their son was still a child, with an illness from which he could not recover, it was the intercession of the Poor Man of Assisi that obtained his recovery, as Doctor Seraphicus himself would recount. In 1235 he went to Paris to perfect his studies, first in the arts then in theology. About eight years later he joined the Franciscans, taking the religious name of Bonaventure. The saint lived during the era of the controversy of the secular masters against the masters of the new mendicant orders (Franciscans and Dominicans). As time went by, thanks to his virtues of piety and science, he earned increasing esteem within the Franciscan Order, which elected him Minister General in 1257 and then considered him a second father.

Bonaventure succeeded in preserving unity among the Friars Minor, who already numbered 30,000 at the beginning of his mandate. He took a stand against both the so-called spiritual current - influenced by the ideas of Joachim of Fiore (†1202) - and the creeping worldliness within the Order. The General Chapter of 1260 in Narbonne was decisive in this regard. Here he helped to draft a text aimed at unifying the norms of life of the Franciscans (the Constitutions of Narbonne) and obtained the task of writing a Life of St. Francis, in order to transmit his charism in an authentic way. The work was ready in 1263, after his painstaking efforts of collecting the testimonies of those who had known the saint of Assisi; it was called Legenda Maior (from the Latin legenda, “to be read”) and, together with the Legenda Minor, a shorter version, it became the official biography of St. Francis. In one of his writings he said: “I confess before God that the reason that made me love Blessed Francis' life more is that it resembles the beginnings and growth of the Church. The Church began with simple fishermen, and later enriched itself with very illustrious and wise doctors; the religion of Blessed Francis was not established by the prudence of men but by Christ”.

He had a great love for the Blessed Sacrament. While Thomas was commissioned to write the liturgical office for the new feast of Corpus Christi, established in 1264 by Urban IV, Bonaventura was asked to give a sermon before the Pope on the real presence of Christ in the Eucharist. Later, Gregory X gave him the task of preparing the Second Council of Lyons (1274), which attempted to bring the Latin Church closer to the Greek one. It was just as the Council assembly was taking place that the saint returned to the house of the Father. Around 1450, during a translation of his relics, Bonaventure's tongue was found uncorrupted. The same prodigy had already occurred two centuries earlier - when he himself had been an eyewitness - for another Franciscan giant: Saint Anthony of Padua.

Sixtus V proclaimed him Doctor of the Church in 1588. Bonaventure argued that both the various arts and philosophy must be at the service of theology, because for all disciplines the way can only be one: Jesus Christ. He explained that the measure of truth is acquired through the light of faith, with respect to which reason is like a handmaid helping to understand the harmonious sense of all Revelation, starting from creation, described as “a ladder made up of six steps”. Six like the days of Creation, which have a correspondence in what Bonaventure calls the six powers of the soul. Through these, man, made in the image and likeness of God, can - if he so ardently desires and is sustained by Grace - rise “from the lower to the higher realities, from those external to us to those internal, from temporal to eternal realities”.

The journey of the mind into God (English text)