Those who after her death became known as Franciscan Conceptionists were from the order founded by Saint Beatrix da Silva (1424-1492), a Portuguese mystic who lived during the period of the great explorers' journeys and the the Reconquista. 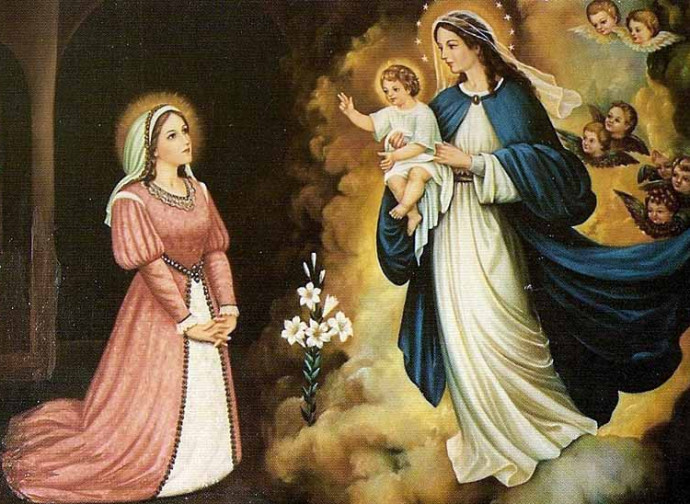 Those who after her death became known as Franciscan Conceptionists were from the order founded by Saint Beatrix da Silva (1424-1492), a Portuguese mystic who lived during the period of the great explorers' journeys and the final phase of the Reconquista.

Eighth of eleven children, she was born into a family of high nobility in Campo Maior, a village of which her father had become the first governor after the liberation from the Moors. One of her brothers was Blessed Amadeus of Portugal (1420-1482), a religious who reformed the Franciscan Order by creating the branch of the Amadeiti, later incorporated by Saint Pius V to the Friars Minor. In 1447 the young Beatrix was called to the court as companion of the nineteen-year-old Isabella of Aviz, who married John II of Castile (1405-1454) in that year. Beatrix was a woman of great beauty, in vain courted by the Castilian nobles; and Isabella ended up being blinded by jealousy, forgetting the friendship and loyalty that her lady showed her.

It is said that the Queen went as far as locking her up in a chest, where Beatrix remained for three days, invoking the help of the Blessed Virgin, who asked her to found an order in honour of her Immaculate Conception. In the end, the arrival at the castle of a maternal uncle led to her liberation, when Isabella believed that her 'rival' in beauty was already dead. Beatrix, who in the meantime had taken a vow of chastity, forgave the queen, who repented.

Around 1454 she left the court and worldly life to retire to the monastery of the Dominican women of Toledo. Here, without professing her vows, she lived for about thirty years, perfectly observing the rule and preparing herself for the mission to which God had called her. In 1484, remaining in Toledo, she moved with some companions to a palace donated to her by Isabella the Catholic (daughter of that same Isabella of Aviz), which was used as a monastery and was named after the Immaculate Conception.

Five years later Innocent VIII approved the new order, dedicated solely to contemplation and placed under Cistercian rule. The habit designed by the foundress was also approved: a white tunic and scapular, a blue cloak and a double embroidery with the image of the Immaculate Conception. Another three years passed and on August 9, 1492, now bedridden but dressed in the religious habit, Beatrix returned to the House of the Father. After the death of the saint, who had a Franciscan as her spiritual director, the connection with the order founded by St Francis of Assisi took place via the pontifical route: the nuns of the monastery of Toledo were therefore called “Franciscan Conceptionists”.

The Conceptionists spread throughout the Iberian Peninsula and then into the New World, making a notable contribution to the propagation of popular piety towards the Immaculate, centuries before the solemn dogmatic definition. In the 17th century the order founded by Saint Beatrix saw the entry of her most famous religious, the Venerable Mary of Agreda (1602-1665), evangelizer of America (in bilocation...) and author of a series of writings of profound spirituality, including a Life of the Virgin Mary and the Mystical City of God.