A sure help for spiritual combat are the teachings of Anthony the Abbot (251-356), a great saint who, despite endeavouring to live a secluded life, actually became the founder of Christian monasticism, the first Desert Father around whom groups of monks gathered to consecrate themselves to God. 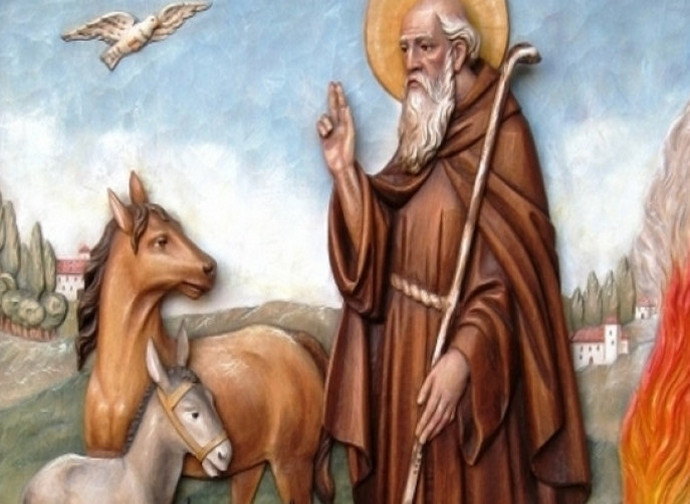 A sure help for spiritual combat are the teachings of Anthony the Abbot (251-356), a great saint who, despite endeavouring to live a secluded life, actually became the founder of Christian monasticism, the first Desert Father around whom groups of monks gathered to consecrate themselves to God. He is venerated as the first abbot precisely because, for the hermits who followed his example, Anthony was the abba, their spiritual father. Already popular during his earthly life, his fame was perpetuated by the Life of Anthony written by Saint Athanasius (c. 295-373), the great bishop of Alexandria of Egypt who knew him well and could therefore affirm: "Even if Anthony acted in secret and desired to remain hidden, the Lord shows him and those like him to everyone, as a lamp".

Anthony was born in Egypt to a wealthy family who gave him a Christian education. At about 20 years old, less than six months after the death of his parents, as he meditated on the apostles who had left everything to follow the Lord, on entering a church he heard a famous passage being read: "If you want to be perfect, go, sell what you own, give it to the poor, and you will have a treasure in heaven. Then come and follow me"(Mt 19:21). So Anthony sold his goods, distributed the proceeds to the needy, retaining only a modest part for his younger sister until, once again in church, he listened to another divine call: "Do not worry about tomorrow". He then gave the poor even the little he still had, entrusted his sister to some Christian virgins, and began to live as an anchorite just outside his village. Whenever he heard of other wise men dedicated to the solitary life he would visit them, to learn some virtues from each, such as meekness and perseverance in fasting and prayer.

A number of different temptations started to assail him with extraordinary vehemence: they related to earthly goods, to affections, to the pleasures of the body. Through them, the devil was trying to turn Anthony away from a life consecrated to God. He opened his heart to other anchorites, who advised him to resist and detach himself even further from the world. He then chose as his refuge a sepulchre dug out of the rock, where a friend used to bring him bread, but the assaults of Satan – who feared that the example of that budding saint would spread – continued to rage day and night. At the height of the struggle, which came to physical pain, Anthony had the comfort of a divine vision which he asked thus: "Where were you? Why didn't you appear from the beginning to free me from suffering?" The heavenly voice replied: "I was here, Anthony, but I was waiting, in order to watch your fight. Since you have faced it and have not been overcome, I will always be your help and make you famous everywhere."

To explain how to distinguish between different spirits, Anthony would say that the celestial visions, unlike the demonic ones, which he fought first of all by the sign of the cross, dissolve the disturbances "as did the great archangel Gabriel with Mary and Zechariah". From a vision he had learned the ora et labora principle: so he combined constant prayer with work, such as weaving baskets or cultivating a small piece of land, as he did on the mountain in the Thebaid Desert, where he retired in the last phase of his long life. He had spent almost twenty years in an abandoned fort (where he received a supply of bread twice a year), before some people wishing to imitate his ascetic life managed to drag him out by knocking down the door. Being very knowledgeable about the Holy Scriptures, he taught that they are the first direction for the Christian, who must use them together with the tradition of the Fathers, as well as the mutual exhortation to remain firm in their faith in Christ.

He knew, admired and, later, buried the older Paul of Thebes (this is narrated by Saint Jerome), revered by the Church as the first hermit, whose disciples counted Saint Macarius the Great (300-390) and Saint Pachomius (292-348), among others; Saint Hilarion of Gaza (291-371) also sought his advice. All of them contributed, in different ways, to directing monasticism towards cenobitism, that is, communal life in monasteries.

Under special circumstances, Anthony would temporarily leave solitude: he went to Alexandria to comfort the Christians persecuted by Maximinus Daia, impressing the imperial judges with his determination; on another occasion, at the invitation of Athanasius, who was fighting the Arian heresy, he urged Christians to remain faithful to the Nicene Creed. Pagan philosophers often visited him, intending to ridicule his faith in a crucified God, but came back wondering at Anthony's wisdom since he, who had no classical education, could dismantle their arguments and explain the reasons for the Christian faith. Even Constantine and his sons, attracted by his fame as a teacher and healer, wrote to him for advice; and he, very humbly, replied (but only at the monks' prompting) that Christ is the true and only King and that they needed to think of salvation, while behaving according to justice.

As a father striving for the heavenly goods, aware of the love of Christ crucified, as well as Satan's envy and contempt of men, he warned both the sinners, urging them to conversion, and the righteous, that they may not abandon the straight and narrow path: "Everyone will be judged as to whether he has kept the faith (2 Tim 4:7) and respected the commandments".