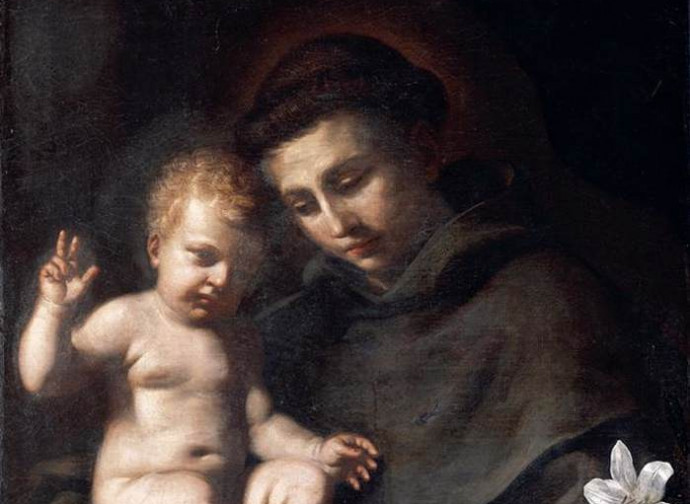 In 1228, Gregory IX got to know St. Anthony of Padua (1195-1231), who had come to Rome to safeguard the unity of the Franciscan Order, which was at risk after the death of St. Francis (1181-1226). The Pope was so impressed by the young preacher that he called him “Ark of the Covenant” and “Treasure trove of Scriptures”.

The saint was born in Lisbon on August 15, 1195, to a wealthy family who had baptized him with the name of Fernando. At the age of fifteen he joined the Regular Canons of the Holy Cross and two years later he asked to be allowed to move from Lisbon to Coimbra, because he wanted more time to meditate on God. At the monastery of Coimbra, furnished with a large library, he was able to deepen his study of the Bible and the Fathers of the Church. In 1220, while his Order was experiencing the interference of the Portuguese king, a pivotal event took place in the life of Fernando, who in the meantime had been ordained a priest. The five Franciscan protomartyrs (Berard, Otho, Peter, Accursius and Adjutus) who had been sent by Saint Francis to Morocco to convert the Muslims to Christ, had been beheaded and their bodies were taken back home via Coimbra.

For Don Fernando it was a call to the mission. Having obtained permission, he left the Augustinian canons and joined a hermitage of Franciscans. He marked his new religious beginning with a change of name: he decided to call himself Anthony, in honour of Saint Anthony Abbot. Desiring the grace of martyrdom, he obtained to go with a confrere to Morocco, but here an illness prevented him from preaching. He was persuaded to return home, but a storm blew the ship to the Sicilian coast. In Sicily the saint came into contact with the friars of Messina, from whom he learned the news of the General Chapter convened by St. Francis for Pentecost of 1221. Anthony travelled up Italy on foot together with his confreres and after several weeks he arrived in Assisi: here, from May 30 to June 8, he took part in what went down in history as the “Chapter of Mats”, so called because the small 'army' of Franciscans (there were about 3,000) camped in huts made of mats.

The Portuguese friar, a stranger to most, spent those days humbly listening to the decisions that were made in his new Order. In the end he was sent to a hermitage near Forlì, where he lived for a year dedicating himself to the most lowly jobs, among fasting and prayers. In September 1222 he was suddenly called by his superior to give an exhortation speech for the clerics who were about to receive priestly ordination: the audience, on hearing with what passion Anthony spoke about God, was struck with admiration. Informed of his extraordinary talent, the superiors of Assisi directed him to preach in northern Italy. Here Anthony's faith worked, among others, the “Eucharistic miracle of Rimini”, also called “of the mule”, because the animal, at the saint's command, knelt before the consecrated Host, causing the conversion of a heretic named Bonovillo who had doubted the real Presence of Jesus in the Eucharist.

He combined the firm proclamation of the truth with sweetness of character, and was called “Hammer of Heretics”. He made it clear to his superiors that the contrast to heresies required a solid knowledge of Catholic doctrine. Saint Francis gave him the approval for the foundation in Bologna of the first Franciscan theological study, a fundamental step in the history of the Order: “To Brother Anthony, my bishop, Brother Francis wishes you health. I like that you teach theology to our brothers, on condition, however, that, because of this study, the spirit of holy prayer and devotion is not extinguished in it, as is prescribed in the Rule”. Francis himself, in 1224, sent him as a missionary to France to continue his work of converting Cathar heretics. He returned to Italy after the death of the Saint of Assisi and in 1227 he was appointed Minister Provincial for Northern Italy. It was then that, while continuing to travel, he established his habitual residence in the convent of Padua. In those years his sermons, which ranged from truths of faith to purity of life, were followed by huge crowds of faithful. Moreover, he spent long hours in the confessional.

In Padua he finished writing the second volume of the Sermons, in which the reflection on the mystery of Christ is central. A mystery into which the faithful can enter with prayer and love for Mary, which Anthony called “Masterpiece of the Most High”. He said that he was sure of her Assumption in body and soul, more than seven centuries before the solemn proclamation of the dogma by Pius XII, who in fact quoted the saint in the Munificentissimus Deus of 1950. Four years earlier, Pope Pacelli had also honoured Saint Anthony as Doctor Evangelicus, officially declaring him Doctor of the Church. It must be said, however, that Gregory IX had already invoked him as such on 30 May 1232 (at the end of the fastest canonization process in history, thanks also to the 53 miracles attributed to the intercession of Anthony), when he proclaimed him saint: “O Doctor of the Church, blessed Anthony, lover of the divine word, pray for us to the Son of God”.

Jesus and Mary were his guiding stars until his last earthly days. It was in those days that Count Tiso, a friend to whom Anthony had retired in prayer in June 1231, as he approached the saint's room with the door ajar, saw a very intense light: it was the Baby Jesus, in Anthony's arms. On June 13, realizing that he had only a short time left to live, he asked to be taken back to Padua because he wanted to die there. He died in a hospice near the monastery of the Poor Clares and not far from the city walls. The brethren sang to him his favourite Marian hymn, O gloriosa Domina. He returned to the Father after saying: “I see my Lord”.