Saint Agnes of Bohemia (1211-1282), inflamed as she was by love of God, had no doubt when choosing between the emperor, who had asked her to be his bride, and the King of the universe. 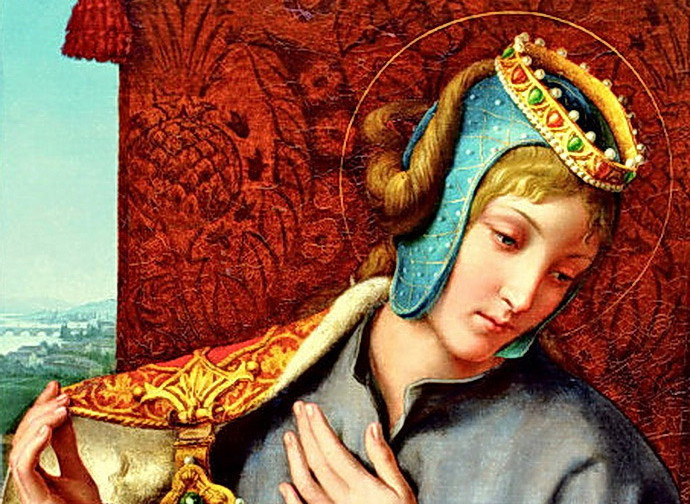 Saint Agnes of Bohemia (1211-1282), inflamed as she was by love of God, had no doubt when choosing between the emperor, who had asked her to be his bride, and the King of the universe.

This earned her the admiration of a very humble bride of Christ, Saint Clare of Assisi (1193-1253), who from the monastery of Saint Damian wrote her letters that reveal the great spiritual communion that had been established between the two.

Agnes was born in Prague into a very noble family with many examples of holiness. First cousin of Saint Elizabeth of Hungary, she was the daughter of Ottokar I, King of Bohemia, and his wife Constance. At the age of three she was entrusted to the care of Saint Hedwig of Andechs, sister-in-law of her uncle Andrew II of Hungary, who raised her in the monastery she had founded in the Polish Trzebnica, instilling in her the first elements of the Christian faith. She continued to be educated in her homeland by Premonstratensian nuns, but at the age of eight she was betrothed to her peer Henry, son of Frederick II of Swabia, and shortly afterwards taken to the court in Vienna to receive an education consonant with a future sovereign.

Without ever forgetting the Christian virtues, she lived at the Austrian court until 1225, when the betrothal pact was dissolved (the Duke of Austria, again for dynastic convenience, arranged for his daughter to marry Henry) and Agnes was free to return to Prague. Here she devoted herself even more intensely to prayer and decided to consecrate her virginity to God. Soon other European sovereigns proposed marriage to her, namely Henry III of England and the Emperor Frederick II himself, but Agnes was firmly determined to keep her promise and turned for help to Pope Gregory IX, who defended her vow of virginity. Frederick II commented: “If she had rejected me for a mortal man, I would have avenged myself with the sword. But I cannot be offended because she preferred the King of Heaven to me”.

At the same time, some Friars Minor who had arrived in Prague spoke to her about the model of life of Clare of Assisi and instructed her in Franciscan spirituality. Impressed by those teachings, between 1232 and 1233 Agnes founded the first Franciscan monastery in her city, a hospital dedicated to Saint Francis. She also had a monastery built for the “Poor Sisters” or “Damianites”, where she herself entered on the day of Pentecost 1234, professing the solemn vows of chastity, obedience and poverty. The news of her entry into the monastery spread throughout Europe. Meanwhile, she had begun corresponding with Saint Clare, who wrote to her in one of her letters full of biblical references: “If with Him you suffer, with Him you will reign; if with Him you weep, with Him you will rejoice; if in His company you die on the cross of tribulation, you will possess with Him the heavenly dwellings in the splendour of the saints, and your name will be written in the Book of Life”.

Her love for God was nourished by the hours she spent adoring the Blessed Sacrament, fasting, meditating on the Passion of Our Lord and a tender devotion to the Blessed Virgin. With the works of charity that flowed from this love and by her example, Agnes “played a remarkable role”, as John Paul II said in his homily for her canonization, “in the civil and cultural development of her nation”. In her long earthly life she was not spared sickness and pain, which the saint always united with Christ’s sufferings, contemplating the mysteries until her last day in her monastery (of which she became abbess, though she never stopped cooking and mending clothes for the poor and lepers), where she died in fame of sanctity on 2 March 1282.

Letters from Saint Clare of Assisi to Saint Agnes of Bohemia