Russia-Ukraine war: the worst is yet to come

Hope of a peace deal seems increasingly out of reach, finding a solution to the conflict ever more difficult, still this doesn’t mean attempts to resolve the conflict are worthless. In an interview, the Catholic Archbishop of Moscow, Monsignor Paolo Pezzi, exposes the extreme gravity of the situation and the urgency for negotiation. 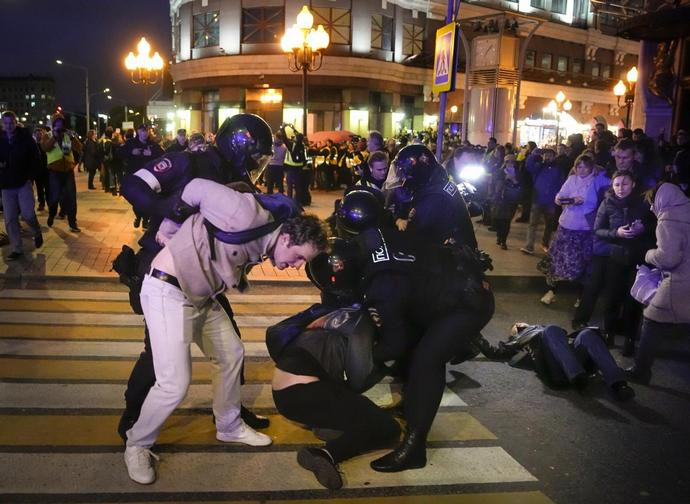 Judging by the images, the first people to oppose Russian President Vladimir Putin's decision to call up a number of reservists to replenish the troops engaged in Ukraine are the Russian citizens themselves directly involved. Protests, attempts to cross borders to avoid the war, are certainly not reassuring signals for Putin, even if the Russian president has at least received the support of Kirill, Patriarch of Moscow and All Russia: "Go courageously to fulfil your military duty", he is reported to have said in a message to the soldiers, "and remember that if you give your life for your country, you will be with God in His Kingdom who will give you glory and eternal life”.

It is not known how much these words have touched the hearts of Russian soldiers and those called to join the army, but they certainly make those who care about a peaceful solution to this conflict shudder. As do the decisions announced two days ago by Putin, which, in addition to the call to arms of the reservists, include the referendum for the annexation of the Ukrainian provinces conquered with military force, which has already begun.

"It is a disturbing situation”, the Catholic archbishop of Moscow and president of the Russian Bishops' Conference, Monsignor Paolo Pezzi, told the SIR news agency on 21 September. And he is right: the escalation underway cannot leave anyone calm, not even those of us who continue to watch unaware of what is happening, worrying above all about the consequences on energy prices. And there is no consolation in analyses of Putin's weakness, which would be the reason for his decision to raise the bar in the ongoing conflict, and his loss of popularity in Russia that could also lead to his downfall. Assuming this is indeed the case, any instability in Russia could be no less dangerous than its unity behind Putin.

One cannot keep calm. As the conflict continues to escalate, as it has for the last seven months, we still see public opinion and politicians divided like rival  supporters or instrumentalising the conflict in Ukraine for domestic political reasons as is happening in a number of countries. It’s as if the matter only concerned the people of Ukraine and Russia, without realising that a fire that starts in one room, if it is not extinguished immediately, is destined to spread to the whole flat, then to the block of flats and gradually to the whole city.

“Peace, unfortunately, seems to be receding”, Monsignor Pezzi continues. It is a statement of such gravity that it should awaken consciences and make political leaders in particular rush to find a solution to avoid the worst. To find by any means the right channels to push the parties involved to stop using arms and sit down at a negotiating table: "Try to always keep channels open, to never close them down," says Monsignor Pezzi, echoing the words of Pope Francis.

But, it is becoming increasingly difficult, both because of the escalation that has been triggered and because it seems that everyone - not only Ukraine and Russia - even without admitting it openly, trusts that they have something to gain from the war's continuation.

Moscow is convinced that it can regain the territory returned to Kiev's control; the Ukrainian government, galvanised by the first successes of the counteroffensive, is confident it can recuperate all the territories Russia has taken from it, including the Crimea; Europe and the United States are counting on the strain Russia in under to weaken it and possibly destroy the hated Putin. At the moment, the only ones who seem to view the war's continuation with concern are China and India, with Turkey ready to exploit Russia's weakening position to expand its sphere of influence.

But if one expects the war to end with the declaration of a winner and a loser, it is very likely that it will instead lead to a further widening of the conflict, a boundary we are now close to crossing as the military involvement of the United States and the United Kingdom is increasingly evident, and it is now explicitly stated in Moscow that the war is against the West. A sign of this is also the fact that there is an increase in specific references to the use of nuclear weapons. In fact, hoping for an internal coup within Russia, then counting on someone coming to power in Moscow who will withdraw all troops from Ukraine, is a risky gamble that could cost very dearly.

Bishop Pezzi identifies the key to a possible solution: “It seems to me that the main problem is to find a way out that does not make anyone feel defeated”. Very difficult, extremely difficult; and it is the Archbishop of Moscow himself who explains why: “This is possible, i.e., to come out of a crisis situation without anyone being defeated, only by self-sacrifice. It seems to me objectively difficult that anyone is willing to take the first step. So we must continue to insist on creative steps”.

Monsignor Pezzi's words express with great lucidity the extreme gravity of the situation and the equally extreme difficulty, at this point, of avoiding the worst. There is a need for leaders who are truly aware of the impending danger that the whole world is in, and who are willing to make it a priority to stop the war; leaders who are not primarily concerned with whether Russia or Ukraine will win, but who will push the parties involved to “take the first step” towards a negotiated solution.

Apart from Russia and Ukraine, the serious problem is that no leader of this calibre or who manifests this intention is emerging at the moment.