The charism of Saint Rocco, whom God sent among the plague victims, fell ill with the plague but recovered miraculously. He was humble to the end, even during the five years he spent imprisoned on a false charge of spying. He is the patron saint of the infectiously ill and invalids.

- THE RECIPE: BEEF STEW FROM PIACENZA 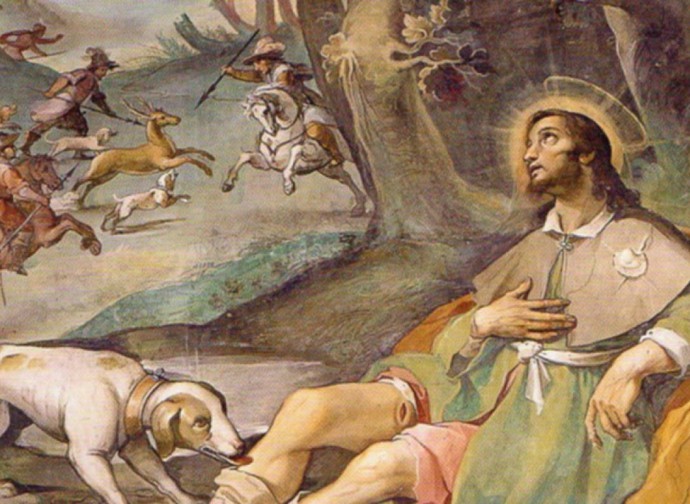 The dense forest enveloped him like a cool mantle on a sultry July day. He walked slowly towards the small spring that had appeared the day before, gushing from the hard ground between the trees. He bent down with difficulty, suffering from swollen lymph nodes in all his joints. The fever made his temples throb and his headache was so excruciating that he thought for a moment that the white dog that had appeared out of nowhere and was now heading towards him was a figment of his fevered brain.

But the dog was real. It approached in a calm manner and dropped at the man’s feet a large piece of brown bread, which he had carried clenched between his teeth. The man took the bread and patted the large head of the Molossian. The dog looked up, then turned away and disappeared again.

Rocco, this was the man's name, sat down near the spring and tried hard to eat the bread, even though he was not hungry. He knew he had to get his strength back, not for himself, but for the dozens of sick people in his care. He bent over the spring and drank the cool water. He felt better.

He lay down on the ground and closed his eyes. He looked back on his past and saw his life unfold up to that point. He saw himself as a child, the son of elderly parents. They had prayed so much for a child. And he had arrived, late in their lives: he was born in 1348 (or 1349) in Montpellier, a prosperous city that belonged to the crown of Aragon and was annexed to the crown of France in 1349. It was a large southern city, cosmopolitan and tolerant, very famous for its university. An important pilgrimage destination on the Via Tolosana, it further benefited from its proximity to Avignon, the seat of the papacy for over forty years. 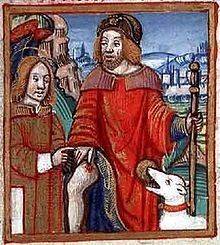 His parents welcomed him with great joy. His father, Jean Roch de La Croix, a dignitary of the city, was its first consul in 1363. His mother, Liberia, was from Lombardy. A long-awaited and longed-for child, his birth turned out to be partly miraculous - his parents had prayed to the Virgin Mary for a son - he was in fact born with a birthmark on his chest: a red cross. Spending his childhood in a deeply Christian environment, he was baptised in the sanctuary of Sainte-Marie des Tables, which was also the centre of Montpellier's spiritual, intellectual, administrative, and social life.

His parents sent him to school with the Dominicans, a then new and flourishing order, before he went on to study medicine. At a young age, he faced the terrible plague epidemics of 1358 and 1361. In Montpellier, the latter caused up to 500 deaths a day for three months.

His charism with the sick undoubtedly manifested itself at that time. He also lost his parents, who died one after the other. Left alone and in possession of the large family inheritance, he gave everything to the poor and began a pilgrimage to Rome. He had also heard that an epidemic was raging in Cesena. He went there, doing what God expected of him on his pilgrimage, and again obtained miraculous healings.

He finally arrived in Rome, at the beginning of 1368, and took care of the sick at the Ospedale di Santo Spirito. A cardinal (Gaillard de Boisvert, regent pro tempore of the Sacred Penitentiary at the time), healed by his care and having witnessed miraculous healings, introduced him to Pope Urban V, who, on seeing him, exclaimed: "It seems to me that you are from Heaven!", and gave him a plenary indulgence.

In Montpellier Rocco had undoubtedly seen this Pope of Avignon, who tried to re-establish the papacy in Rome from 1367 to 1370, when he came to consecrate the high altar of the church of the monastery of St Benedict, the future St Peter’s Basilica.

Rocco left Rome in 1370 to return to his homeland. Yet, in July 1371, he was still in Italy in Piacenza, at the Hospital Notre-Dame de Bethlehem, near the Church of Saint Anne, where he assisted, healed, and comforted the sick. The travel diary of Sir Enguerrand de Salinière, who was passing through the city, mentions him: "A compatriot called Roch is held in high regard in these parts. He has the reputation of being a healer, performs miracles on people given up for dead, and has great piety". 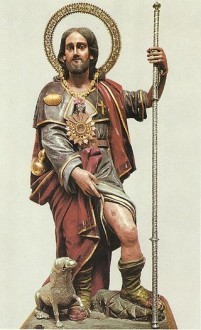 But fate struck Rocco down. Stricken by the plague and in pain, Rocco walked to a wood on the edge of the fortified village of Sarmato, believing that this was where he would die. A spring had just sprung up there, the one described at the beginning of our story. And every day a dog brought him bread. The dog's owner was the nobleman Gothard Pallastrelli, who would become Rocco's disciple. He would also be the saint's first biographer and the author of the only true portrait of him alive, preserved in Piacenza, in the church of St Anne. It is also reported that an angel saved Rocco. And it is possible, since he regained his health and returned to Piacenza, to the plague victims, showing remarkable courage and humanity.

Rocco resumed his journey, but the lands of Milan were the scene of a war between the Duke of Milan, Barnabé Visconti, his brother Galeazzo II, and the league formed by Pope Urban V, led by Amadeus VI of Savoy. This conflict lasted from 1371 to 1375. Taken for a spy, Rocco was arrested in Broni and transferred to Voghera by Beccaria, military intendant of the Visconti family.

Rocco's fame was already great. Moreover, thanks to the cross-shaped birthmark on his chest, he could have been identified by his uncle, the governor of the city, or by one of the latter's closest collaborators. But, true to the desire for anonymity of all pilgrims, Rocco did not reveal his identity and asked to be allowed to resume his journey as a "humble servant of God". His request was refused and he remained in prison.

His imprisonment lasted five years. According to tradition, he revealed his identity to a priest only the day before his death, Tuesday 16 August 1379, at the age of about 30. He was added to the Roman Martyrology by Pope Gregory XIII and canonised by Urban VIII in 1629 following the escalation of popular fervour.