Resignation and Pope Emeritus, another mess is brewing

A new Motu Proprio to regulate the "emeritus papacy", a canonical problem effectively left open by Benedict XVI, is expected soon. What according to his predecessor was to remain an exception, for Francis it would become an institution along with all the problems that this entails because by its very nature only one person can assume the title of “pope.” The proposed hypothesis of retirement at 85 would be a blow to the heart of the Petrine office. 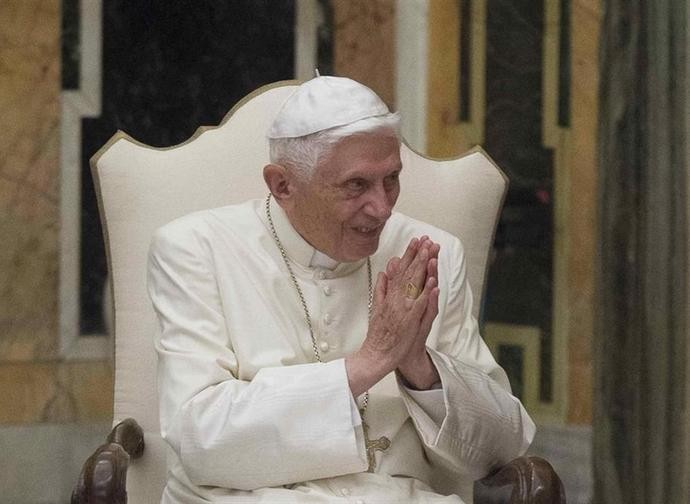 After thunder comes rain. For now, we are still only hearing thunder, but the roaring downpour seems imminent. The thunder is drawing ever nearer and seems to indicate the forthcoming resignation of Francis and the impending regulation of the "emeritus papacy", which, according to some rumours, might happen via yet another Motu Proprio.

Benedict XVI's decision to grant himself the title of "pope emeritus" had raised legitimate concerns right from the outset. Perhaps the most authoritative voice raised was that of Cardinal Walter Brandmüller (see here) who had also called for "a future legal regulation of the papal resignation" so as not to leave that "notable lacuna legis that currently exists" which would increase "uncertainties in a dangerous and vitally important moment for the Church." In another interview on 28 October 2017, Brandmüller had stated that "the figure of ‘pope emeritus’ has never existed during the entire history of the Church. And now a pope arrives and overturns the two-thousand-year-old tradition. It has completely stunned not only us cardinals." This statement later led the pope emeritus to reply to Brandmüller in two short but decisive letters.

How can we assess Benedict XVI 's insistence in defending the use of this title for himself? There are only two possibilities: either Ratzinger, an excellent theologian, had made a major slip up at the most crucial moment of his pontificate or his choice has been motivated by the awareness of a particularly dramatic situation for the Church which called for a "pontificate of exception" (Ausnahmepontifikat) according to the expression used in Msgr. Georg Gänswein’s incredible speech in 2016 (when he was still Prefect of the Papal Household). He said a pontificate of exception would introduce "a kind of state of exception willed by Heaven." The expression clearly referred to Carl Schmitt's category of Ausnahmezustand: going outside the law to create a new context of the law.

Whatever Benedict XVI's choice may have meant (perhaps more thought should be given to it), moving towards the institution of an "emeritus papacy" seems like a very bad idea. Moreover, it would go in the diametrically opposite direction taken by Benedict XVI’s decision, at least according to Gänswein's reconstruction, which regarded precisely a pontificate "outside the law" (this is the literal meaning of the Ausnahmepontifikat). Therefore, it was about an exceptional situation and not rather about creating a new stable canonical figure. It is likely that the hypothesis of a forthcoming institutionalisation of the emeritus papacy would even disturb Brandmüller. In the aforementioned interview, he concluded that "the resignation of the pope is possible and has been done, yet, it is to be hoped that it will never happen again."

An initial speculation on the content of Francis' forthcoming decision might expect a regulation of the "destiny" of resigning popes, one to be placed within a new juridical category of  “pope emeritus” similar to retired bishops. The figure of the bishop emeritus is a rather recent one, since it did not exist prior to the 1983 Code of Canon Law, which according to can. 402 §1, grants that "a bishop whose renunciation of office has been accepted retains the title of emeritus of his diocese." The figure of the bishop emeritus was subsequently set forth by the 2004 Directory for the Pastoral Ministry of Bishops (cfr. no. 225-230).

However, the non-overlapping relationship between a bishop and the pope cannot be overlooked and, consequently, the different outcomes in the event of resigning their office. A bishop whose resignation is accepted by the Supreme Pontiff ceases to be head of his own diocese, but does not cease being a bishop because the fullness of his priesthood has been conferred on him by episcopal ordination and not by appointment. The papacy, on the other hand, is not a fourth degree of holy orders. Hence, the pope does not receive any permanent status. In the sacramental order, he is a bishop, like any other (if a pope is elected who has not yet received ordination, this must be provided for). However, as bishop of Rome he assumes in his own person the Petrine office which makes him pastor of the universal Church. This office, which does not coincide with the individual person of the pope (otherwise, with the death of the person, his office would cease and would not be transferable), is however held by one and only one living person, who is none other than the bishop of Rome. It is, thus, clear that the moment he validly renounces his office, he simply ceases being the pope.

The history of the Church confirms what has been said in the concrete case of the resigning popes: from St. Pontian to Gregory XII, neither of them ever became a pope emeritus, nor even bishop emeritus of Rome. Because the decisive point is that there can only be one pope and the term “pope emeritus” alone is decidedly misleading. Since “pope” is the noun and “emeritus” is the adjective, you cannot give more than one person the title of “pope” at the same time.

Even worse is the second hypothesis that is currently circulating: namely that the imminent Motu Proprio would establish an age limit of 85 years. Accordingly, once the current Pontiff has reached this age, he must resign. This would be a blow to the heart of the Petrine office for two reasons. First of all, it would constitute a de facto functionalist reductionism of the figure of the Roman Pontiff who would be ridiculed as a kind of CEO of an international company, one who would be forced to retire by a certain date (a problem already relevant for bishops handing in their resignation at age 75). Secondly, closely linked to the first, is that the Roman Pontiff is the only one who does not have to submit his resignation, but must only declare it. He becomes the legitimate successor of Peter by the mere fact of consenting to his election and ceases to be so when, for serious reasons, when he states his resignation (apart from his death, grave insanity recognised by the College of Cardinals, acts of heresy or manifest schism).

Canon 332, § 2, which regulates the resignation of the Roman Pontiff, states that "to be valid, the renunciation must be freely made and duly manifested, but it is not required that anyone accept it." The pope must simply make known what he has freely chosen to do, without waiting for its acceptance by third parties. This is so because he, and he alone, is the pope. The possible inclusion of an age limit to the exercise of the Petrine ministry would constitute a serious and unprecedented violation of this peculiarity of the pope who would instead find himself “obliged” by a Motu Proprio to declare his resignation and which, by its very nature, would not be a free choice.

If the canonical framework of the "emeritus papacy" were to go in this direction, it would make for a clear attack on the figure of the Roman Pontiff; and it matters little that this attack comes from a pope himself. No canonist worthy of the name would endorse such a thing.