Popular movements and the ambiguous ‘theology of the people’

Popular movements, encouraged by Francis, are a heterogeneous galaxy bringing together socialism, ecologism, feminism, 'cancel cultures', etc. Their new pastoral approach presupposes doctrinal convictions often at odds with the SDC. The 'theology of the people' is an ambiguous category, and the Catholic who participates in such movements errs on two counts. 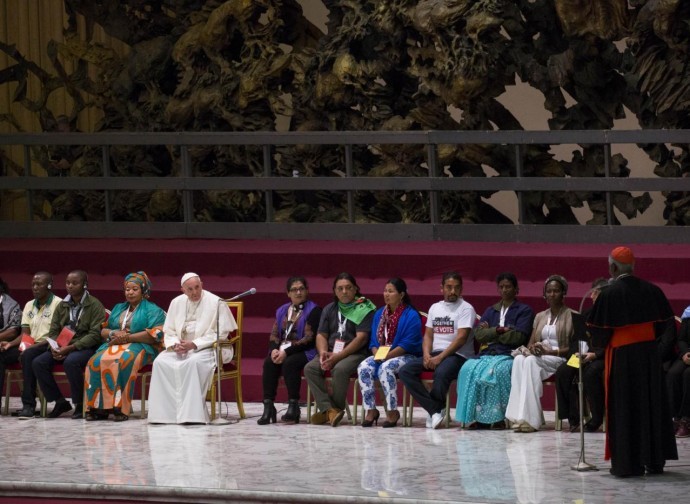 The issue of 'popular movements' is a confusing, dangerous aspect of today’s Church. Pope Francis has been on this path for some time. On 16 October, he sent a long video message to the participants of the IV World Meeting of Popular Movements. On 12 April 2020, Easter Sunday, he sent them a letter. He had previously met with the popular movements on 9 July 2015 in Santa Cruz de la Sierra, Bolivia, during one of his apostolic trips, and on that occasion too he had given a long speech, Two other meetings had been held in the Vatican.

As a result of this pastoral approach, training schools for Catholic leaders of popular movements were established in Latin America. The Academia de Líderes Católicos - Latinoamérica has its branches in Chile, Mexico, Uruguay, Cosa Rica, Colombia, Brazil and Spain. Its online educational activities also extend to Venezuela, Peru, Argentina, Panama, Guatemala and Central Europe. The programmes of these schools also include some lessons on the Social Doctrine of the Church, but placed in a new overall context and hence reinterpreted and, in my opinion, deformed.

The new pastoral approach of grassroots movements presupposes certain new doctrinal convictions that raise some concerns. A first observation to be made relates to the extreme variety of the people's movements themselves, which can include indigenous peoples' movements, socialist and communist movements, revolutionary movements, ecological movements of various orientations, Christian grassroots communities animated by Liberation Theology, feminist movements, movements for gender equality extended to the LGBT, movements for "cancel culture" that demolish the statues of Christopher Columbus, movements in the style of "Black Lives Matter" with their ideological hatred of all that is "white". The expression "popular movements" thus encompasses a heterogeneous galaxy which, while in some places pursuing acceptable goals, in others - or rather in many others - proposes ends that contradict the requirements of the Social Doctrine of the Church. Moreover, it should not be forgotten that many of these popular movements are not popular at all, but are financed and driven by powerful national or transnational political entities.

The new approach of Francis and the Academy of liderespopulares wants Catholics to participate in popular movements insofar as they are popular, hence in 'any' popular movement. It is therefore a matter of participation not motivated by a point of view fully compliant with the Social Doctrine of the Church. It is not the latter that motivates or directs the presence in the movement, but it is the presence in the movement that reinterprets the Social Doctrine. As long as the movement is popular, is sufficient a reason for Catholics to commit to it.

The fact of being popular, however, does not eliminate from the movement the moral, political and religious unacceptability of some of its goals, and hence Catholics end up contributing to misguided outcomes. Even if on some specific points these outcomes could be acceptable, the general context pursued by the specific popular movement nullifies its positivity by instrumentalising it for the wrong objectives.

In this way, Catholics who participates err on two fronts: they collaborate with evil and renounce imprinting their own Catholic vision on the movement. This is why the expression líderes católicos (Catholic leaders) applied to popular movements is contradictory: if the movement is considered good because it is popular, then Catholics cannot become its leaders in order to guide it in a Catholic way, but only to develop its 'popularity'.

The ambiguity of this pastoral operation lies in the so-called 'theology of the people' that forms its basis, making it a bomb destined to explode causing much damage. The ‘people’ understood in a sociological, historical, and cultural sense is not a founding category, but is a category which is founded. Its value depends on the extent to which it embodies authentic natural and religious values in accordance with an established culture and history. Not every tradition is valid, not every culture is true, not every population is authentic. Peoples too need a salvation that they cannot give to themselves. Right reason and true religion are indispensable for the purification of peoples. The "theology of the people", on the other hand, holds that the people are the repository of human and Christian wisdom simply because they are a people and it would apply to every people. But this is not true.