Pope Francis at the 'Supermarket of Religions'

The Holy Father's participation in the Congress of Religious Leaders feeds the widespread idea that in essence every religion is as good as the other: an indifferentism alien to the Church and to reason, since if all are true, none is. Archbishop Athanasius Schneider says this in no uncertain terms, and reminds us that bishops must speak frankly, including to the successor of Peter. 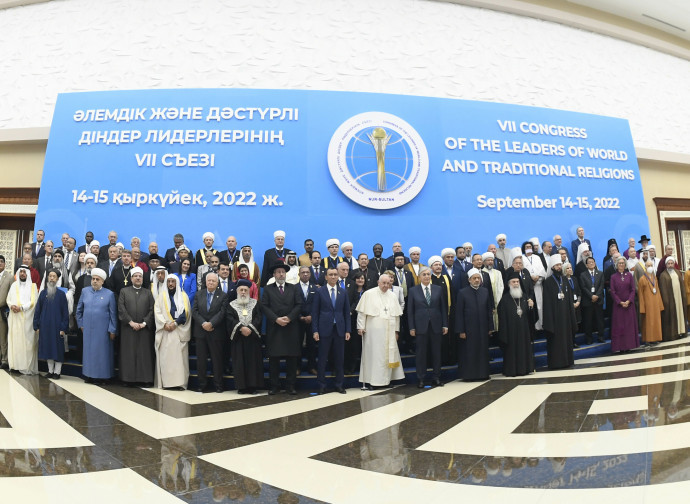 In the past few days, even before the opening in the capital of Kazakhstan of the 7th Congress of Leaders of World and Traditional Religions, which ended on 15 September, the Daily Compass had expressed not only perplexity but substantial criticism of the initiative and, above all, but not only, of the appropriateness of Francis' participation. On the Congress’ conclusion, Msgr Athanasius Schneider, auxiliary bishop of Nur-Sultan, formerly Astana, the venue of the Congress, also expressed his own evaluations, basically making two points.

Firstly, that the event may have given the impression that there is a 'supermarket of religions' in which everyone can pick their own off the shelf. The image of the supermarket of religions, which is not new, nevertheless expresses well the dominant tendency today to consider religious freedom like a customer facing a shop shelf. The Catholic Church cannot subscribe to this tendency and, with it, neither can reason. The latter already tells us that the duty to seek God, which underlies the right to religious freedom, is rooted in the purposes of human nature. It is not open to any deity, it is not directed to a generic world of the 'Divine' - unfortunately, this expression was also used by Francis in his speeches in Astana - but to the true and only God, the object of research by true reason. Arriving, after this search, at forms of paganism - for example - does not satisfy the natural inclination to seek God, and does not realise true freedom of religion. Schneider is right, therefore, to recall this point.

His second statement concerns the relationship of the bishops with the pope. Schneider said that the former are not 'employees' of the pope - and therefore tacit and passive executors, we would add - but they are brothers, and if in good conscience a bishop sees shortcomings in what the pope is saying or doing, he does well to tell him, with due respect. It is the Pope himself, Schneider added not without a polemical accent, who calls for frankness and synodality.  In this spirit, he hoped that in the future the Pope would no longer participate in such gatherings. We join him in this wish, although believing it to be humanly difficult to achieve, given the premises and Francis' numerous expressions of his convictions on the matter. We also join in the wish that the bishops all free themselves from the conviction of being 'employees' of the pope and, as successors of the apostles, intervene on doctrinal issues, such as this one of interreligious dialogue.

For many, Archbishop Schneider's statements were cutting, according to some even courageous. Without denying these aspects, others - including the author of this piece - considered them all in all timid, as if they only wanted to highlight the possible danger of misunderstanding the true meaning of the pope's presence in Nur-Sultan, but not the event itself. Instead, it is precisely the event itself that is to be radically contested, and not only its possible misunderstandings.

As we recall, in the Abu Dhabi statement Francis had endorsed the expression that God wills the various religions. Archbishop Schneider himself had asked him to rectify the expression as incorrect. An actual rectification - of course - never came. Now, the accession to the Nur-Sultan Congress, with its acceptance of the plurality of religions as a positive thing, reconfirms that conception. It is not, therefore, just a matter of the danger of misunderstanding the event as a supermarket of religions, but of thinking that God is the owner of the supermarket. If this were the case, however, it would mean that the Catholic Church has forgotten that ours is a fallen world and that revelation speaks of an original sin that has produced this situation in which there are so many religions. Unless we think that in Eden there was religious pluralism.

The great misfortune today in the Church is the thought that the current situation of humanity is 'normal' - as Augusto Del Noce pointed out - and that God created us as we are now. Behind events such as the one in Kazakhstan, and behind the adherence of the Catholic Church leadership to their approach, lies this great fundamental error that transforms all Catholic theology. It is, therefore, much more than a "possible misunderstanding", as Archbishop Schneider stated.

It must also be remembered that if religions are many, not as a result of a primordial fall, but "by nature", and that many will remain forever, then one must consider them all to be true, despite the fact that they say very different and sometimes opposing things. Now, to hold all different and opposing statements to be true is to be uninterested in their truth, in this case the truth of religions. But to be indifferent to the truth of religions is to be an atheist, moreover an atheist of the worst kind, the postmodern atheism of indifference.