The Pope’s participation in the Congress of World and Traditional Religious Leaders, which is taking place from today in Kazakhstan, cannot fail to raise questions and perplexity. The pretext is working for world peace, but in this way the Church participates in the new syncretistic civil morality, which necessarily puts the truth or non-truth of religions in brackets. 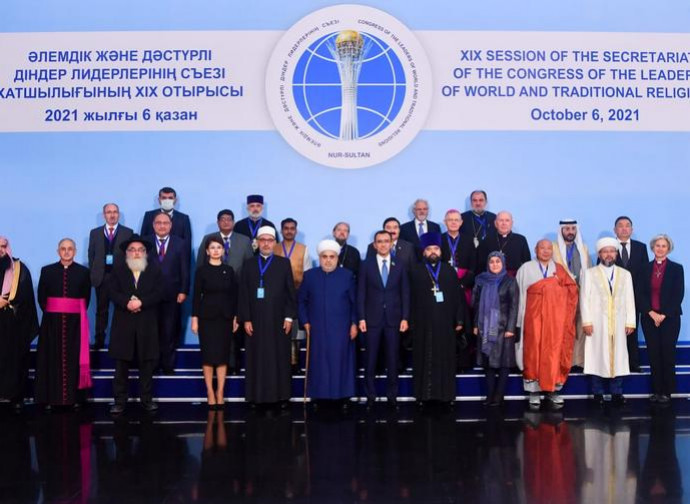 Francis' trip to Kazakhstan from 13 September, to 15 September has been widely covered by the media. The detailed programme circulated by the Holy See is public; it is known that he will not meet Patriarch Kirill as had previously been speculated, it is instead well known that there may be room to see Chinese President Xi Jinping. Above all, it has been explained that Francis will participate in the 7th Congress of Leaders of World and Traditional Religions to be held in Astana, now Nur Sultan, "as a messenger of peace" at a time when the world is in great need of peace.
News reports have much insisted on the importance of these religious meetings for peace and harmony. All this is known, but the significance of the meeting of religious leaders also lends itself to other assessments, which the official media - almost all of them now - do not talk about. We shall see ...

Let’s begin by examining what this Congress of Leaders of World and Traditional Religions is. It arose in 2003 on the initiative of the then president of Kazakhstan and has as its objectives to seek “common human reference points in world and traditional religions” and to operate a “permanent international interreligious institution for the dialogue of religions and the adoption of agreed decisions”. This is the so-called “UN of religions”.

The Congress functions through a Secretariat, which, as we learn from the official website, implements decisions, prepares materials, drafts documents, agrees on key issues and, above all, coordinates “interaction with international structures on issues of Interfaith and Intercivilization Dialogue”. To date, 19 Secretariats have functioned. In the current one sit 10 representatives from Islam, 5 from Christianity, of which one is Catholic, 4 representatives from Buddhism, 1 from Taoism, 1 from Shintoism, 1 from Hinduism, 3 from international institutions and 5 representatives from the Republic of Kazakhstan. As can be seen, the composition of the Secretariat does not offer much guarantee of balance; Catholics are almost completely absent from it, and it seems to work mainly for contacts with institutions. The UN of religions certainly cannot remain detached from the assemblies of international bodies, with which it must tune in to the problems of peace and harmony.

The Catholic Church had sent cardinals like Tomko, Etchegaray, or Tauran to previous congresses, but the pope had never gone. John Paul II had visited Kazakhstan in 2001, but on a pastoral trip that had no connection with the World Congress of Leaders of World and Traditional Religions. Instead, now, Francis is going there, more for the Congress than for Kazakhstan.
His trip is certainly in line with the encyclical Fratelli tutti with the Abu Dhabi declaration and with his conception of interreligious dialogue. But this cannot eliminate - if anything it fuels - the perplexities and questions about such a major image investment on such a fragile forum as the Congress, and on a project for a UN of religions that is more reminiscent of the projects of Enlightenment internationalism than the intentions of Catholic universalism.

The most illustrious thinker who provided the basis for a project like the one being pursued in the Congresses in Kazakhstan was certainly Immanuel Kant. For this purpose he wrote his two treatises on Perpetual Peace (1795) and Religion within the Limits of Reason Alone (1793). As a good 'Pietist', Kant reduced religion to reason and faith to morality. The only thing the believer must do is 'behave well', everything else is superstition. And they must do it because it is the only thing they can do. Kantian religion is, therefore, a universal religion, because reason and morality are universal. It is also a religion without dogmas, because its principles are the principles of morality that reason alone is capable of fixing in the conscience.

Enlightenment and Masonic universalism has always adhered to these premises. However, Antonio Rosmini, and Sofia Vanni Rovighi with him, have said that Kant was philosophically atheist. Because that morality to which religion had to be reduced, was the morality 'of the world', the dominant morality: we can call it UN humanism. The natural morality that the Congress we are talking about also seeks, is not the natural morality, but it is the current morality, the lowest common denominator of what mankind (and international institutions) today consider good and evil. If it were natural morality, then it would demand the true God as the fulfilment of its demands and not the syncretism of the different gods.

Once again we will see the Pope praying with Shintoists and Taoists. Who knows if this will really serve peace: the ways of the Lord are mysterious and beyond our reach. However, asking oneself serious and radical questions about the Catholic Church's participation in this new syncretistic civic morality, which can only arise from putting the truth or non-truth of religions in brackets and reducing them to the conventional morality of international institutions, seems to me to be a truly moral and religious duty.