Scandalous sentence of the Sindh High Court against the 14-year-old Catholic Huma Younus, kidnapped, raped and forced to marry a Muslim man: the marriage is valid, according to Sharia law, because Huma had already begun her menstrual cycle. This proves that Pakistani laws, which prohibit marriage to minors, are only a façade to secure Western economic aid, firstly from the European Union. The judgement sounds like a sentence for the thousands of Christian girls who suffer the same fate, with forced conversions perpetrated through abduction and sexual violence. 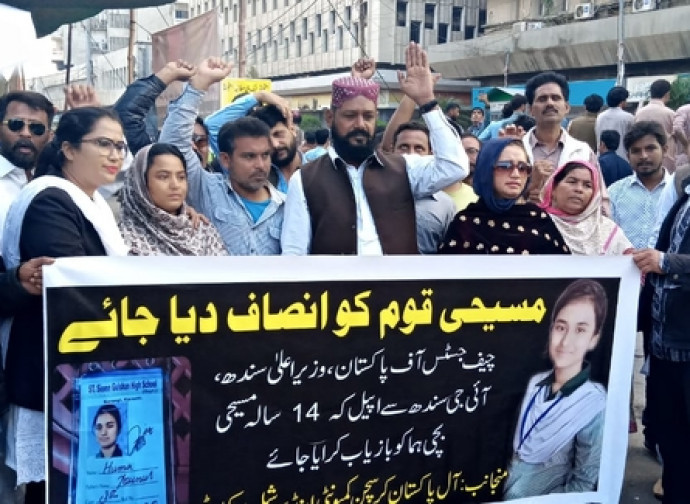 3 February, at 11 a.m. in Pakistan, the two judges of the High Court of Sindh, Muhammad Iqbal Kalhoro and Irshad Ali Shah, ruled that the marriage between Huma Younus, a 14-year-old Catholic, and her abductor, the Muslim Abdul Jabbar, is valid. Their judgement was not based on the presumed legal age of the girl, as the kidnapper has claimed since the beginning of this affair. The marriage is valid because, under Islamic law, Sharia law, a girl or even a child who has already had her first menstrual cycle is “ready” to get married. This golden rule is based on the life of the Prophet, who married one of his wives, Aisha, when she was only six, but waited patiently for her first menstruation, when she was nine years old, to consummate the marriage.

So Sharia law prevails. And it doesn't matter if in Sindh, the Karachi province, since 2014 the Child Marriage Restraint Act prohibits the marriage of minors and also imposes a term of imprisonment for the adult spouse.

What is the point of formulating and approving laws if they can be gaily ignored as if it were still the 7th Century? “The point is to give Pakistan credit in the eyes of the international community”, as Huma's parents' lawyer, Tabassum Yousaf, explained after the sentence. Cosmetic laws that have the sole purpose of allowing the Asian country not to lose out on development funds from the West or benefits such as the Generalized System of Preferences, or GSP, a preferential tariff system for trade with the European Union granted to Pakistan by the EU. Such benefits often include human rights clauses: formulating laws to protect them is an excellent ploy.

What a pity that, as this case shows, Sharia law prevails and judicial rulings often reference verses from the Koran rather than civil laws.

How does one explain to a mother that her 14-year-old daughter can be legally raped every day? Mrs Nagheena Younus was in tears yesterday before the High Court in Karachi. There had been high hopes for this case, because for the first time judges in a Second Instance Court were called upon to give their opinion on a case of forced conversion. But no progress has been achieved because almost all the parents of the approximately one thousand Christian or Hindu girls who are kidnapped, raped, forced to convert to Islam and marry their aggressor every year in Pakistan, have no resources to access justice and to combat the overwhelming social pressures, threats, and even the complicity of the local police with the Muslim abductors.

But this time it was different: Younus and Nagheena, Huma's parents, could count on the pro bono assistance of their Catholic lawyer, Ms Tabassum Yousaf, and the support of the Pontifical Foundation Aid to the Church in Need, which is bearing all legal costs. However, this has not sufficed in a country whose judicial system fiercely discriminates against Christians and other religious minorities.

Ms Yousaf has nonetheless asked the judges to order a medical examination to certify her client’s age. When Huma was abducted on October 10, her parents immediately provided her birth certificate and baptism certificate issued by the Catholic parish of St James in Karachi, both of which were dated May 22, 2005. But since the kidnapper Jabbar claims that his “wife” is in fact of legal age – it is interesting to note that the word of a Muslim is deemed to be worth as much as, if not more than, a document issued by the Pakistani government itself – a medical examination will be necessary to verify her age.

Unfortunately, however, the Investigation Officer in charge of this test is Akhtar Hussain, the same Investigation Officer who should have taken the girl back to Karachi after Jabbar had abducted her to the Punjab, 600 kilometres from her home, to marry her, and the same officer who should have escorted Huma to court yesterday (obviously the girl was not present). And, as if the suspicions of complicity with the kidnapper weren't enough, the “high five” that Hussain and Jabbar's lawyer exchanged after the previous hearing on January 16 sent out a clear message.

“Hussain could easily counterfeit the medical report”, says Ms Yousaf, Huma’s lawyer, who hopes at least to be able to have the girl transferred to a women's centre so that she can escape the daily rapes. It certainly won't be easy and, in any case, since the marriage was deemed valid by the High Court, there is little chance that Jabbar will be arrested or punished. But the young lawyer and Huma’s parents, together with Aid to the Church in Need, are not giving up. We wait to see what surprises the next hearing, scheduled for March 4, will bring.