Huma's ordeal: abducted, converted to Islam and forced to marry her abductor

It was October 10, 2019: Huma Younus, a 14-year-old Christian girl, is abducted by a Muslim man, named Abdul Jabbar. Her parents went immediately to the police station to file their complaint, but in their pursuit of justice they have run straight into a brick wall. Every year in Pakistan at least a thousand Christian and Hindu girls are kidnapped. In the meantime, the abductor raped Huma and forced her to marry him and convert to Islam. After the first judicial troubles, Huma's family found the support of Aid to the Church in Need and a legal help from a Catholic lawyer, Tabassum Youssaf. She is risking her life, but she's determined to fight this battle 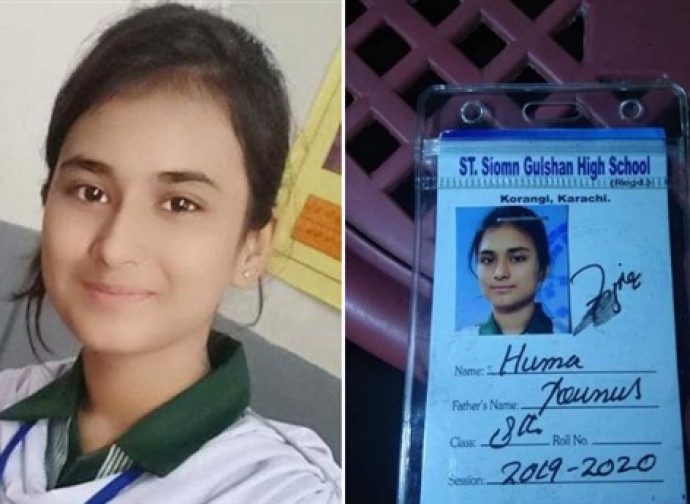 Yet another case of yet another young girl torn away from her family and the Christian community. Yet another instance in which the Pakistani judicial system reveals all of its corruption in its mistreatment of Christians.

It was October 10, 2019, in a suburb of Karachi. Huma Younus, a 14-year-old Christian girl, was abducted. Her parents, Younus and Nagheena Masih, know exactly who it was: a Moslem man named Abdul Jabbar. But unfortunately, like so many other Christian parents before them, in their pursuit of justice they have run straight into a brick wall.

Every year in Pakistan, as various local organizations report, there are at least a thousand Christian and Hindu girls who are raped, violated, forced to convert Islam and to marry the very man who has raped them. It is difficult to return these young women – who are teenagers or even younger – to their homes, because of the connivance between the rapists and many police officers and a judicial system that discriminates against minorities.

Here is what happened to Huma’s parents. They immediately went to the police station in the suburb of Korangi to file their complaint, bringing their daughter’s birth certificate and baptismal certificate with them. In Sindh, the province of Pakistan where Karachi is located, there is a law called the Sindh Child Marriage Restraint Act which forbids the marriage of minors and allows for the prosecution of the adult spouse. This is a positive development in comparison to other Pakistani provinces in which similar legislation does not exist and Sharia law is enforced – the Islamic Law which states that as long as a young girl has had her first menstrual cycle she may contract marriage. But the law in Sindh Province is not enough in a country where bribery of judges is rampant and in which many legal officials are quite happy if a young Christian girl is converted to Islam, even if by force. The Masihs were discouraged from making a complaint by the police in every way. “You cannot win the case,” the police told them. In the meantime, the Moslem man Jabbar had immediately carried Huma into Punjab Province, about 600 kilometers from her home, to a place called Dhera Ghazi Khan. There he violated her, forced her to convert to Islam, and forced her to marry him.

The official at the police station in Korangi who handled the investigation, Akhter Sahab, went to Punjab to investigate, but of course not before he demanded 15,000 rupees (about 90 euro) for the train ticket and “miscellaneous costs.” The Masihs gave him everything they had, but the rapist Jabbar probably offered Sahab more if he would return to Karachi without the girl. The case was registered in the City Court of Karachi, the lowest level of the judicial system. Jabbar, who maintains that is “wife” is actually 18 years old and converted to Islam of her own free will, was arrested. But the lawyer for Huma’s parents – who like the majority of Christians are all but illiterate and have no knowledge of their legal rights – had them unknowingly sign a copy of a document authorizing the release of their daughter’s kidnapper from prison on bail. Jabbar was supposed to present himself in court for a hearing, but five different times he did not show up. And then he went on the counterattack. Likely at the suggestion of some official or police officer, he filed a complaint against Huma’s parents at a higher level court, the High Court of Sindh Province, declaring that he did not appear at his various court hearings because he was afraid that the Masihs and other Christians, who were peacefully protesting outside the courthouse against yet another injustice, could have killed him.

Fortunately at this point, Huma’s parents found a real angel: a Catholic woman named Tabassum Yousaf, a lawyer who had already worked on several cases of young girls who were raped and who now defends them pro bono. In fact it very often happens that the parents of young Christian girls who have been raped simply give up fighting for justice because they do not have the means to pursue legal justice. This did not happen in the case of Huma’s parents because they received support from the lawyer Ms. Yousaf and were also able to count on the support of Aid to the Church in Need. The Pontifical Foundation launched an important awareness campaign on the matter and is taking care of all of the family’s legal expenses.

Obviously it is not all a bed of roses. Jabbar and his family continue to pressure the Masihs to drop the charges. He even threatened to denounce his “in-laws” and Ms. Yousaf for blasphemy. “It often happens that the kidnappers use the so-called anti-blasphemy law to convince the families of the abducted girls to drop the matter,” Tabassum Yousaf explained. But she does not let this intimidate her: “I fear for my life, but I keep going forward and I refuse to be intimidated.”

The support of Aid to the Church in Need has also allowed for a lawyer of the Supreme Court, Mujahid Hussein, to join Ms. Yousaf in handling this case. It is hoped that Hussein’s long experience as a lawyer as well as the fact that he is a Moslem will be able to help the case.

The hearing before the High Court is set for this coming January 16. In the meantime, Ms. Yousaf and Huma’s parents are trying to have her return to her home at least until the end of the trial, in order to free her from a life of daily abuse. But despite the fact that the Masih’s presented the girl’s birth certificate, the fact that her abductor claims that she is 18 years old is sufficient to cast doubt on whether she is a minor, even though this is a fact proven by documents issued by the Pakistani government itself. A medical examination will therefore be necessary to prove the girl’s age. Obviously the result of such an examination is not at all a given, because it is not difficult to bribe those who perform the medical examination.

“We will continue to fight,” Ms. Yousaf says, “not only for Huma, but for all young Christian and Hindu girls, who each year, each month, and each week face this same Cross. If we succeed in winning, this case will set a very important legal precedent.”

Such are their hopes, but in the background there remains the fear that Huma, like thousands of other Christian girls before her, will remain chained for life to her tormentor, or worse still will end up as a victim of human trafficking. Many young Christian girls, after just a few weeks, are repudiated by their “husbands” and are then sold to other men, or forced into prostitution.