On 25 September 1983, a mother named Gladys Quiroga de Motta, while praying the Rosary in San Nicolás de los Arroyos (Argentina), saw the Virgin Mary holding the Child Jesus. It was the first of a long series of apparitions. 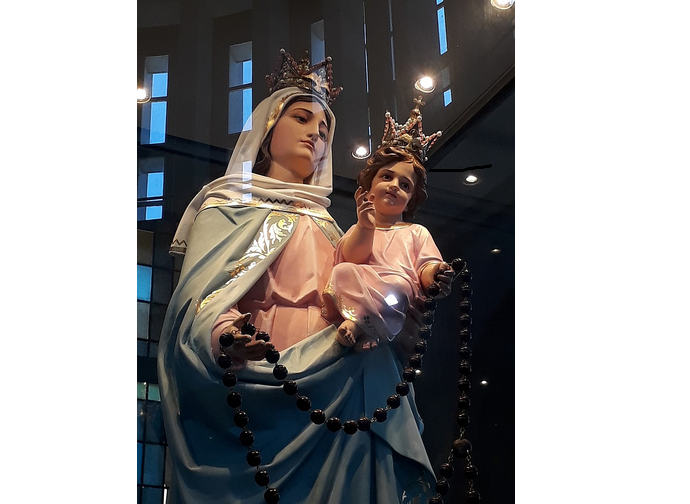 On 25 September 1983, a mother named Gladys Quiroga de Motta, while praying the Rosary in San Nicolás de los Arroyos (Argentina), saw the Virgin Mary holding the Child Jesus. It was the first of a long series of apparitions. On 27 November Gladys saw a statue of the Virgin and Child. Later, accompanied by Father Carlos Pérez, she recognized it to be identical to the one preserved - awaiting restoration - in the bell tower of the cathedral of San Nicolás. “They have forgotten me, but I have risen”, the Virgin had told her, presenting herself as Our Lady of the Rosary. It was a wooden statue that had been blessed a century earlier by Leo XIII and donated by a woman to the Cathedral of San Nicolás, consecrated in 1884. The Virgin also indicated the place where a sanctuary was to be built, whose work was started by Bishop Domingo Salvador Castagna.

After a long period of theological investigation, the apparitions were finally recognised as having supernatural character by Bishop Héctor Cardelli. In the decree of 22 May 2016 Monsignor Cardelli explained the reasons for his decision, which was based on the perfect adherence of the messages to Catholic doctrine, the proven virtues of the visionary, and the abundant spiritual fruits (conversions, spirit of prayer and charity) generated since the beginning, 33 years earlier, of the apparitions. So he concluded: “(...) as a diocesan bishop competent for this type of pronouncement, motivated by a sense of just conscience (...) I recognise the supernatural character of the happy events by which God, through His beloved Daughter, Jesus through His Most Holy Mother, the Holy Spirit, through His beloved Bride, has lovingly manifested Himself in our Diocese”.

In her messages, the Virgin several times explicitly recalls the mission of Lourdes and Fatima and points out that turning away from God is the cause of all the evils of humanity. What she said on 15 September 1989, the day of Our Lady of Sorrows, is an example of her messages. She explained that in these times “my sorrows are: rejection of my Son, atheism, lack of charity, babies who are not born, misunderstanding in families, the great selfishness of so many children in the world, their hearts still closed to the Love of this Mother” (click here).[1]

The Virgin often ends her messages by indicating precise passages from the Holy Scriptures. She frequently exhorts young people not to let themselves be deceived by the Evil One and to discover God's love. “I see youths drifting away, the devil drives them away, leading them to sin”, she says on 12 December 1984. Therefore she asks “to pray for the youths of the world who have not met God. For those who behave degradingly, for those who are badly advised. The Lord can redeem them because He is merciful and loves His children” (31 January 1984). The way that Our Lady shows to everyone is “conversion to God” and “consecration to my Mother’s Heart” (9 July 1987). At other times it is Jesus who manifests Himself to Gladys, confirming the maternal mission, as on 19 November 1987, when He explains to the visionary that “souls will come to Me through Her Immaculate Heart”.

Divorce and abortion are among the great evils about which our heavenly Mother warns us. Thus, on 24 November 1985, after having given glory to God for those who honour marriage, she warns that those who divorce “commit a very serious sin, an attack against God, because this is a unique and indissoluble bond”. And on 7 March 1987, she exhorts Gladys to pray “for creatures that are not born” because “there are so many abortions, so many attacks on lives that belong only to God!”

All these sins are multiplying while at the same time the attacks against the institution founded by Christ to proclaim the Truth - the Church - are increasing in the world. “Despite my great sorrow to see with what cruelty the Church is being attacked, I am fighting to save her,” said the Blessed Virgin on 1 November 1986. Eight days later she asked for a novena for the Bride of Christ: “Today more than ever she suffers the most horrible persecutions”, warns the Virgin, but adds that soon the Church will “shine like the brightest star”.

Another uncomfortable message for contemporary society is the indissoluble bond between love and the cross, which must be accepted on every earthly day in view of eternity. “The Lord has prepared, my daughter, for each one their own path. A great truth is that on every path there is a cross, and it is this same cross that must be carried with love and offered to the Lord. One does not reach God except through suffering, and even less does one come to love God if one does not recognize that it is through the cross that one will reach His Glory [...]” (19 August 1987).

Recurrent is the reminder about the real presence of Jesus in the Eucharist and the infinite value of the Holy Mass, in which Our Lady asks to participate “every day or at least once a week” (15 September 1984). The fruits will be abundant. In the Holy Mass, explains the Heavenly Mother on August 3, 1985, “you will be nourished by the Bread of Life, which is Christ Jesus. Feed on Him, no plague will come to you from outside, for Jesus will destroy it”.

[1] This link is to all the messages, collected in chronological order and thematically, to be made known to the public and received by Gladys from 13 October 1983, the anniversary of the last apparition of Fatima, to 11 February 1990, feast day of Our Lady of Lourdes. Gladys continued to receive messages from Our Lady in the following years (including the 21st century) and other collections have in the meantime been authorised for publication by the Diocese. It should be noted, however, that the situation changed in part with the successor of Mgr. Cardelli, Bishop Hugo Norberto Santiago, who in 2017 forbade the dissemination of further messages.