Our Lady of Mount Carmel

The feast of Our Lady of Mount Carmel, linked to the very unusual history of the Carmelite Order, is one of the dearest to Christian piety. Considering the wealth of biblical and mystical references attached to it, one could also say that it manifests in a special way the beauty of God's saving plan. 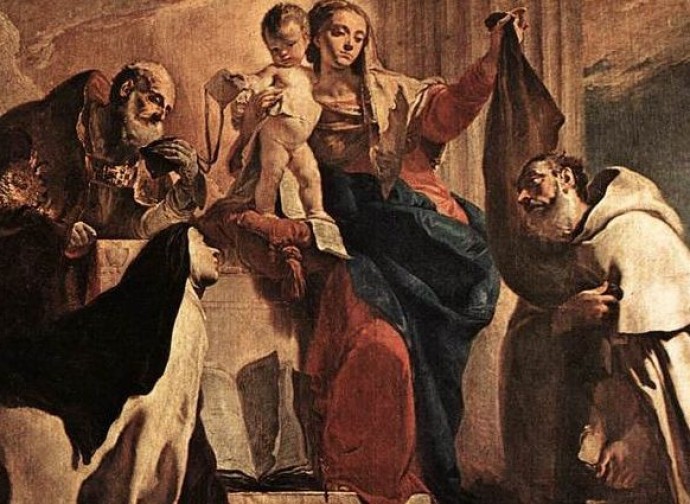 The feast of Our Lady of Mount Carmel, linked to the very unusual history of the Carmelite Order, is one of the dearest to Christian piety. Considering the wealth of biblical and mystical references attached to it, one could also say that it manifests in a special way the beauty of God's saving plan.

Carmel, a name of Jewish origin meaning “garden” or “vineyard of God”, is in the strict sense a mountain (belonging to the mountain range of the same name) at the foot of which stands the city of Haifa in Israel. It is mentioned in some passages of the Old Testament as a symbol of splendour and perfection. Caput tuum ut Carmelus, “Thine head upon thee is (beautiful) like Carmel” (Songs 7, 5), says the groom of the Song of Songs to express the beauty of the bride. “The glory of Lebanon shall be given unto it, the excellency of Carmel and Sharon”, announces Isaiah in one of his prophecies about the coming of Christ (Is 35): in this verse the Fathers of the Church have noted a reference to Mary, the Mother of the Saviour.

Mount Carmel is also the scene of one of the most famous episodes narrated in the First Book of Kings, where Elijah, the only prophet left to publicly defend the purity of faith in God, and persecuted under the reign of Ahab (c. 874-853 BC), challenges and defeats the 450 prophets of Baal (1 King 18). It was the third year of the drought that Elijah himself had foretold to the king, as divine punishment for the continual offenses against the Lord and for the spread of the cult of idols. The sight from the mountain of a cloud, as small as “a man's hand” rising from the sea, was a sign that the drought was about to end: “Suddenly the sky was darkened by clouds and wind, and there was a great rain”. That small cloud was read by the ancient Fathers as a prophetic image of the Blessed Virgin, who welcomed the divine Son into her womb, becoming a fruitful source of life and salvation for mankind.

At Mount Carmel, according to tradition, the Holy Family stopped on their return from Egypt. In imitation of Elijah, from the dawn of Christianity hermits settled on the sacred mountains. As we read in the Book of Institutions of the first monks of Carmel, these hermits “in the year 93 of the Incarnation of the Son of God destroyed their ancient house and built a chapel on Mount Carmel, where Elijah saw the little cloud in prayer, in honour of this first Virgin devoted to  God”. When the first Crusaders, at the end of the 11th century, reached Mount Carmel, they found some religious there who called themselves heirs of Elijah's disciples and observed the rule of Saint Basil. This explains why the Carmelite Order does not have a founder in the common sense of the term, but has always recognized the Blessed Virgin as its patroness - promising to serve her faithfully, to the greater glory of God - and looks to Elijah as its spiritual father.

With the aggregation of Latin pilgrims, the hermits of Carmel began to lead a cenobitic life. At the beginning of the 13th century they asked St. Albert, who had become Patriarch of Jerusalem (1205-1214), to write a rule for their community. Around 1238, because of the Saracens, the Carmelite friars had to leave the Holy Land and settled in Europe, where they founded several monasteries, the first of which was in Messina.

But why the date of 16 July? It is worth remembering the figure of Saint Simon Stock, an Englishman who was the sixth prior of the Carmelites and worked to transform his institute into a mendicant order (to him is attributed the beautiful hymn Flos Carmeli, Flower of Carmen). Well, as tradition reports, on 16 July 1251 St. Simon received the scapular from the Blessed Virgin, surrounded by a multitude of angels and with the Child in her arms. “Here is the privilege that I give to you and to all the children of Carmel. Whoever dies wearing this habit will not suffer eternal fire”, Our Lady said to the saint about the scapular, commonly called the “little habit” and consisting of two pieces of cloth joined by a string. It is the priest who places the scapular on the neck of the faithful. And the latter, consecrating himself to Mary and placing himself under her special maternal protection, undertakes to imitate her virtues in order to one day contemplate the Face of God.