Migration, a weapon to destroy national identities. The case of Italy

The recent clash between Italy and France over the ships which collect migrants in the Mediterranean skippered by Non Governmental Organizations (NGOs) is only the symptom  of a wider war which aims to dissolve the identity of Europe. Italy is the main battlefield as Cardinal Biffi warned twenty years ago. 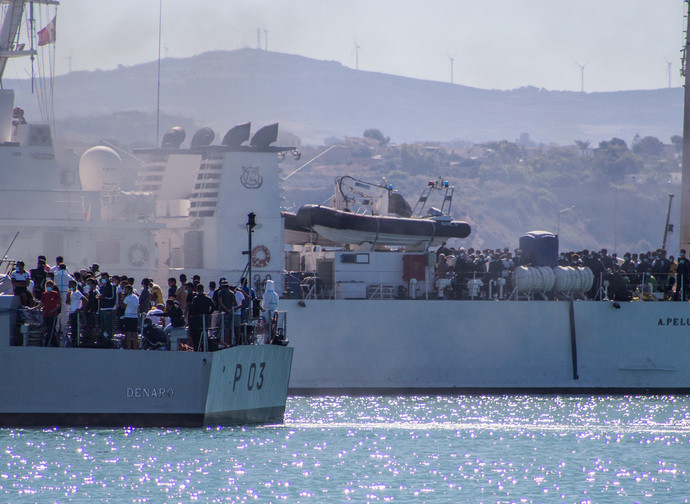 “Italy is not a deserted or semi-inhabited moor, with no history, no living and vital traditions, no distinctive cultural spiritual physiognomy, open to be randomly populated as if it didn’t have  a typical heritage of humanism and civilization that needs to be preserved.” The recent standoff between Italy and France over the responsibility for the constant flow of illegal immigrants taxied from Africa to Italy’s shores by NGO ships, brings to mind these words pronounced back in 2000 by the late cardinal Giacomo Biffi, archbishop of Bologna and one of Italy’s most prominent ecclesiastical authorities. Biffi had dared to say that the integration of newcomers to a nation would be easier if migrants were channelled to countries with compatible cultures.  His words came after years of  politically correct pressure from progressive media, NGOs, trade unions, politicians and many progressive clerics, had mainstreamed opinions which made native Italians feel morally obliged to step aside while undocumented asylum seekers, made up by over 90% of hardy young males, indiscriminately poured in.

But then, as now, it was not only a matter of numbers. Back in 2000, when Cardinal Biffi spoke out, asking the authorities to make life easier for people by promoting immigration from compatible cultures, Saudi Arabia was hosting some 1.5 million Catholic workers from abroad, while in Catholic Italy the vast majority of migrants were Muslim. The Cardinal didn’t think this was a spontaneous occurrence.

His concern was in keeping with the teachings of the reigning Pontiff, Saint John Paul II, who wrote of preserving the memory of one’s national heritage and who repeatedly exhorted the Catholic faithful of the European Union to make every effort  to get the Christian roots of Europe mentioned in the dawning Constitution. Likewise, Pope Emeritus Benedict XVI empathized with the drama entailed in the uprooting of humanity, and insisted that the right to emigrate comes only after “the right not to emigrate”.

The intention of dissolving Europe’s identity into a sea of otherness had become explicit at a Summit in Tampere, Finland, in 1999, where decisions were taken that led to restraining European nationals for years, while giving priority to people from outside Europe.  Subsequently, Europe’s ruling class has also shown its determination to universalize European history by subtracting everything distinctive from it, in things like the “House of European History”, a museum in Brussels conceived as if religion had never existed on the continent, or like the elimination from all euro bills of the visages of actual people or of actual historical sites, leaving only pictures of anonymous artifacts that could belong to anyone.

The ruling oligarchy also remained deaf to the pleas to include a mention of Europe’s religious roots in the Constitution, even when the French and the Dutch referendums voted it down in 2005: there was a murmur for a day or two that hastily attributed the outcome to the voters’ fear of competition from Polish plumbers, after which the name was quietly changed from European Constitution to Treaty of Lisbon, and future referendums were avoided everywhere possible.

Today, 22 years after the controversy over Cardinal Biffi’s request for compatible immigration, the Catholic Church is decidely on the same page as the globalists. Pope Francis has repeatedly prescribed unconditional open ports  and written approvingly of migration as  “a lengthy process that aims to shape societies and cultures”. For the 2018 Day of Migrants the Pope advised “granting citizenship free of financial or linguistic requirements” and offering healthcare, housing, education, and the reuniting of families left behind “including grandparents and grandchildren and siblings –  independently of financial requirements”, with the limits to this bountiful inclusivity residing not in the possibilities of the givers but in the needs of the travelers.

Those who think this does not sound much different from statements by George Soros, who finances most of the NGO ships, point to some controversial appointments made by Pope Francis, foremost among which was the late Peter Sutherland,  a Goldman Sachs non-executive chairman with a stellar curriculum in international administration.  Chosen in 2014 as senior financial adviser to the Vatican and elected the following year with Vatican approval to President of the International Catholic Migration Commission, Sutherland had made headlines  with remarks positing the need for EU states to become multicultural.  Speaking to a House of Lords committee in 2012 as UN special representative for migration,  he had specifically asserted that cultural homogeneity was an evil which “the European Union should be doing its best to undermine.”

The recent controversy between France and Italy began with a refusal by Italy’s new government to accord landing rights to the umpteenth NGO ship demanding entry in order to land people from Africa onto Italy’s shores.
France signalled that it would lend a hand this one time, then hotly complained, rejected 123 of the 234 passengers, stopped up the Italian border (which under the Schengen Treaty should actually no longer exist) with long-drawn out inspections, and asked all the other countries to likewise isolate Italy.
Here the numbers of themselves can afford some clarity: Italy this year alone has taken in 90,000 asylum seekers, of which France had so far taken in 38.

The bone of contention is the “Dublin Regulation”, which stipulates that migrants and asylum seekers are the sole responsibility of the first State of entry to the EU. This means that Northern European countries, which geography insures will hardly ever be a first state of entry, get to deliver foreigners back to their original border country of entry, as if he/she belonged there.
Italy maintains that, as per Maritime law,  a migrant’s first state of entry into the EU is the country whose flag is flown by the ship that takes him on board.

Coming on top of Italy’s record-breaking abysmal birth-rate, the last thirty years have been a demogrphic tsunami for a country whose ventures in colonialism were short and few (four of note, as opposed to France’s eighty plus). But ironically, the hundreds of thousands of migrants ineligible for refugee status, who nonetheless can apply to remain in Italy for up to ten years, don’t show up in most official statistics, and therefore remain a story untold by the media.

Now Italy, along with Greece, Malta and Cyprus, is appealing to the European Union for the same solidarity being accorded since 2015 to the central European countries overwhelmed with migrants arriving on foot from the Middle East.  Since then the EU has been shelling out over 6 billion euros annually to Turkey, in exchange for its holding back the asylum seekers  on its own territory, outside the EU.