McCarrick on trial, but it's not Benedict XVI's fault

Theodore McCarrick is to take the stand for pedophilia. He had already resigned as a cardinal in 2018, after Pope Francis suspended him from exercising any public ministry. It’s wrong to insinuate a sort of impunity guaranteed with previous pontificates. Here's why. 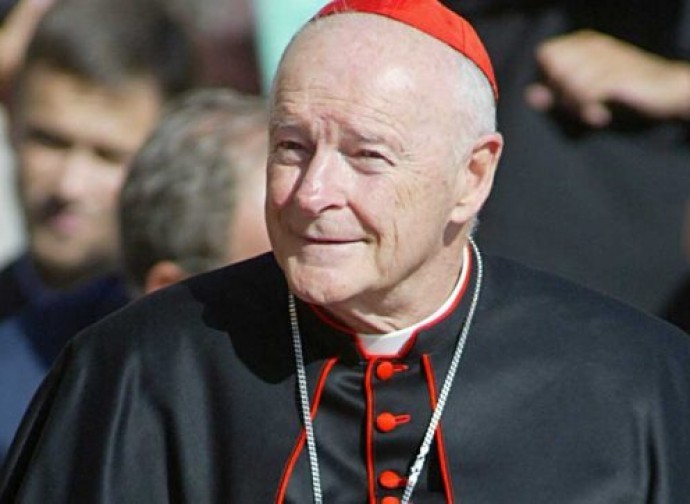 Theodore McCarrick is to take the stand for pedophilia, summoned by the Dedham District Court in Massachusetts on September 3. The news has spread around the world, highlighting the fact that he is the first cardinal and the highest prelate to fall on the wrong side of the American justice system for the sexual abuse of minors. In reality, however, this is not the case. McCarrick, in fact, had been reduced to the lay state more than two years ago, after the Congregation for the Doctrine of the Faith found him guilty of solicitation in Confession and violations of the Sixth Commandment of the Decalogue with minors and adults, with the aggravating circumstance of abuse of power.

He had already 'resigned' as cardinal in 2018 after Pope Francis suspended him from exercising any public ministry and imposed upon him the withdrawal to private life in a designated residence. News of the three-count indictment reached the former archbishop of Washington, D.C. while he was in the Vianney Renewal Center in Dittmer, Missouri. Now 91 years old, he is spending the last part of his life in a recovery facility for priests suffering from pathological addictions. The indictment was triggered by facts dating back to 1974: the alleged victim, then 16 years old, told investigators that McCarrick would have groped his genitals during his brother’s wedding party, at Wellesley College.

The investigation began after a letter from the attorney reached the Middlesex District Attorney's Office. The police then interviewed the alleged victim, who recounted a series of incidents of  sexual assault allegedly perpetrated by the former cardinal, most of them in New Jersey, New York and California. Previous accusations against him of inappropriate behavior - judged "credible and well-founded" by the review committee of the Archdiocese of New York - had not led to  criminal prosecution because they referred to episodes that had taken place between the '70s and '80s, for which, in the meantime, the statute of limitations had been applied.

In the case of the alleged assault at Wellesley College, however, the crime was not time-barred because McCarrick was not a resident of Massachusetts. The former archbishop will have to appear before the court on September 3 for the first hearing of the trial, originally scheduled for August 26. Surprising is the way one of the main Italian newspapers, Corriere della Sera (Corsera) , gave the news of the indictment: in fact, the article on the affair recalls that the former cardinal was retired from ecclesial office in 2006, and then claims that "two Pontiffs, Wojtyla and Ratzinger, did not take any action (...) until the sensational turning point of July 27, 2018, when Pope Francis forced McCarrick to resign from the College of Cardinals."

It must be remembered that, as illustrated in the so-called McCarrick report published last November by the Secretariat of State, Benedict XVI had wanted the resignation of the then archbishop of Washington as soon as the Congregation of the Doctrine of the Faith received material from a U.S. diocese regarding his immoral conduct with priests and seminarians between the 1980s and 1990s. This decision was taken by Ratzinger despite the fact that a few months earlier, at the age of 75, McCarrick had told him of his intention to continue in office with the approval of the then Nuncio.

After his resignation at Easter 2006, the then Prefect of the Congregation for Bishops, Cardinal Giovanni Battista Re, followed up with verbal indications, reiterated in 2008 in writing - with the approval of Benedict XVI - requiring McCarrick to lead a private life and to abandon residence at the "Redemptoris Mater" Seminary. The former cardinal reacted to all such requests with tenacious disobedience, disguised by the obsequious ways in which he justified himself in letters to the Vatican responding to the reproaches. The article is most likely right when it speaks of "overt protection in the Curia that has guaranteed impunity to a serial rapist".

But it forgets to point out that during the Ratzinger pontificate, while the then reigning Pope, through his competent 'minister', Cardinal Re, had tried to curtail the public life of the former archbishop of Washington, whose conduct was shrouded in dark shadows - but not yet accused of pedophilia - other institutions had not done likewise. McCarrick, in fact, continued to travel abroad as a representative of the U.S. State Department, and in his letters to Cardinal Re he used the collaboration entrusted to him by the then Obama administration to justify his failure to comply with the Holy See's instructions.

In 2008, the former archbishop, by then in disgrace, tried to rehabilitate himself with the Secretariat of State by leveraging the good relations he enjoyed with Obama's transition team. And indeed, in the following years, the credit granted to him by the Democratic administration on delicate fronts such as the Middle East and China allowed him to ignore the yellow cards being waived by the Vatican. His activity became even more intense after 2013, to the point of playing an important role of mediation between the United States and Cuba at the request of the Obama administration.

"The sensational turning point of July 27, 2018" mentioned by Corsera, and projected in contrast with the "impunity" guaranteed in previous pontificates, came after the competent committee of the Archdiocese of New York deemed as credible the first accusation of sexual abuse of a minor for an episode that occurred 45 years earlier, while, in the meantime, McCarrick had intensified his activity of "soft diplomacy." A clarification that should not be interpreted as a reversal of the blackboard on which the Corsera had listed  its 'good guys' and its 'bad guys' in an affair that has covered the Church with shame and pain: Francis, in fact, should be credited with having been the first Pope to launch a formal investigation at the Congregation for the Doctrine of the Faith and, before the formal decree,  to have imposed on McCarrick, the renunciation of the cardinalate and subsequent reduction to the lay state. In light of the facts known, however, it is not correct to say that Benedict XVI let the former archbishop of Washington "navigate amidst the high ecclesiastical hierarchies."