"Listen", but to whom? The Synod’s empty words

The next synodal phase exploring ‘synodality’ has just published two documents. Key words scattered throughout the Vadenecum handbook (listening, inclusion, participation, dreaming, hope, novelty, change, stereotypes, prejudices, dialogue, reconciliation, sharing, peripheries, discernment, accessibility, equity, co-responsibility) are words that are so empty, being void of any specific significance, that they are fillable with any potential meaning. For example, do ‘inclusion’ and ‘dialogue’ also regard heresy? Is ‘sharing’ a value in itself regardless of the content being shared? Do ‘stereotypes’ and ‘prejudices’ also concern elements of doctrine? 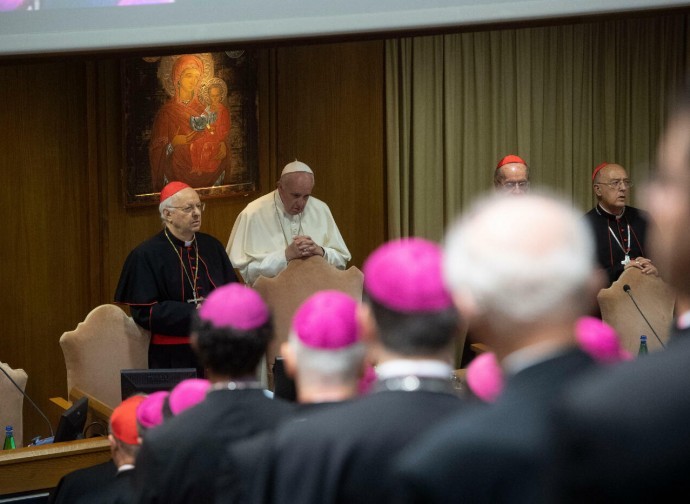 The General Secretariat of the Synod of Bishops, headed by Maltese Cardinal Mario Grech, has just published the two fundamental documents for the next synodal phase which will have an impact on the Universal and local Churches over the next few years. The first is the Preparatory Document (see here) entitled For a Synodal Church: Communion, Participation and Mission. The second is the Vademecum (see here), which is a set of operational guidelines and tools to be used especially in the local Churches. As we now know, the Synod's theme will be ‘synodality.’ The so-called consultation phase is about to begin in Rome on 9 and 10 October and then on 17 October within local Churches. For one year, local Churches will continue such consultation according to the Vademecum's guidelines until October of 2023 when the XVI plenary meeting of Catholic bishops is scheduled to meet in Rome.

This is obviously a long, complex and very cumbersome process. For example, the Synod's central committee will have to draft two Instrumenta Laboris. Just think of how much our evangelization efforts would improve if all this energy were directly injected into it, thereby diverting it from endless synodal meetings and documents. Despite the fact that the synod's official handbook says that the purpose of the bishops' assembly is not to "produce documents" and that the synodal Church mustn't be "self-referential."

After a preliminary reading of the two long texts and, above all, questioning the oddity and the real significance of a synod that talks about itself – a synod on synodality – we are immediately led to think that we must prepare ourselves for a long and risky period. Our concern about the journey that is set to begin is based on two interpretations of how things will work out, neither of which are very reassuring. The sad fact is that there is no foreseen third interpretation. On the one hand, the synodal path is presented as fluid or rather versatile while open to novelty from wherever it arises. It is open to adventure. On the other hand, the synodal path might already be predefined in terms of outcomes. The long journey could just be an opportunity to reveal aspects of a new Church that have already been decided. It might well be a journey that is light and flexible, one having soft boundaries so as to produce disruptive (and devastating) novelties inside the Church. One the other hand, it might be one that is rigidly arranged for producing the same outcomes. So, let's not believe that the two possibilities are necessarily antithetical to each other.

Of the two documents, the most important one will be the Vademecum handbook. This is so since it tells us how we should think and what we should do, while the Preparatory Document will probably be neglected because it is predominantly doctrinal.

Here is a short list of key words that we find scattered throughout the handbook: "listening, inclusion, participation, dream, hope, novelty, change, stereotypes (to be abandoned), prejudices (likewise to be abandoned), dialogue, reconciliation, sharing, peripheries, discernment, accessibility, equity, and co-responsibility." I think, in this context, we can speak of using words which are empty of specific meaning and therefore can be filled in with any meaning we may choose. Do the words "inclusion" and "dialogue" also regard heresy? Is "sharing" a value in itself regardless of the content being shared? Do "stereotypes" and "prejudices" also concern elements of doctrine? Are "dreams," "novelty" and "change" qualified as such, or do they depend on what exactly we dream about, on the novelty we face or are they based upon what kind of change lays ahead for us?

Oddly enough, the most ambiguous expressions found in the two documents  are the most central ones: synodality is a matter of "walking together" as we  "listen to the Spirit". These should be expressions that guide all the others, but instead prove rather confusing. Walking as such is meaningless and the fact of doing it together does not strengthen it in the very least. The Spirit must certainly be listened to and is definitely speaking to us right now as well, but we cannot think that the Spirit is saying things contrary to that which was said in the previous two thousand years. It is equally certain that the Spirit inspires wherever He wishes, but this is not the case everywhere and equally so, and that in order to better listen to the Spirit we must accept everything the world has created.

From these considerations emerges the danger of potentially drifting into change without a foundation in truth. We might think, however, that this is only a consultative phase. Indeed, but a Church that listens before having its say is much more dangerous than one that gives its opinion and then listens. If we look at recent experiences, listening has been a means of getting people to say things that would not otherwise have been said. Hence, we return to our second interpretation. They want the situation to be flexible, open, open to freshness, with few hard boundaries, because they want flashy new ideas to arise from this synodal phase. This is not only expected, not so much in terms of the final documents (which will always end up being texts no one reads) but in terms of the input applied to the new synodal practice, that is, to the "synodal conversion" hoped for. These are novelties that are presently being planned for and being prepared to hatch.