America has just been struck by another emotional blow to its conservative “heartland”, perhaps with historical consequences this November, following the August 23 shooting of a black man, Jacob Blake, Jr, by a white Kenosha, Wisconsin police officer. This incident is causing a new uprising which peaked when a counter-protestor shot and killed two protestors. In the run up to the U.S. presidential elections on November 3, resolving racial tension among citizens, government, and police, will be the biggest influencer of ballots cast for Donald Trump or Joe Biden, surpassing the handling of ongoing troubles with COVID containment and economic woes. 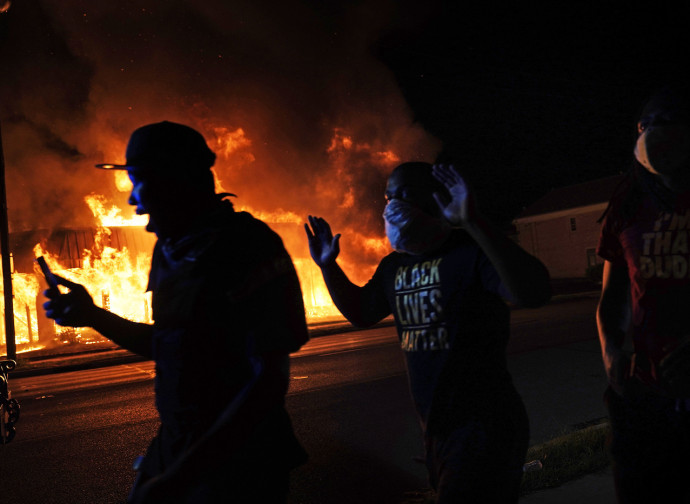 America has just been struck by another emotional blow to its conservative “heartland”, perhaps with historical consequences this November, following the August 23 shooting of a black man, Jacob Blake, Jr, by a white Kenosha, Wisconsin police officer.

In an idyllic Lake Michigan suburb, local citizens have taken to mass rioting in the streets for three nights. Their violent protests have skyrocketed into what is already well known as Marxist theater to spur on political revolution, a near-daily occurrence in the U.S. since the tragic death of George Floyd at the hands of Minneapolis police last May 25. The protestors, led by Blacks Lives Matter and Antifa agitators funded by George Soros with over $100M of the radical leftist’s money, have made their political ideology heard loud and clearly. They have done so not so much with banners and slogans held high in peaceful marches, but via acts of arson, mass looting of commercial properties, burning of police cars, exchanging bullets bullets between protesters and counter-protestors, and the hurling of explosives at federal court buildings.

All this has been a clear signal of their national disgust, a pseudo-civil war to back a Joe Biden-led “brave new world” and underscored by their cynical chants of “Death to America!” It couldn’t have happened in a worse place, as Kenosha is a mere hour’s drive from Milwaukee, the host city of the recently concluded Democratic National Convention that scorned the United States for its so-called “systemic violence and racism.” DNC officials, event speakers and even the Biden-Harris ticket officially condemned Republican Party and Trump as the evil scapegoats of America’s destruction, fiddling away like Nero watching their country go up in flames.

What happened exactly? In brief, on the afternoon of August 23, the 29-year-old Blake had pulled aside his SUV with three children inside. Apparently, he stopped his vehicle to break up a raucous altercation between two women. Local police were called to the scene of escalating anger and questioned Blake for his involvement in the incident. Most of the exchange between Blake and law enforcement was caught on a disturbing cell phone video. Blake is seen walking away from armed police, seemingly ignoring their demands for further questioning and/or temporary detainment. An upset Blake is then filmed leaning into his SUV either to begin driving away or to grab something. To the shock of observers, Officer Rusten Sheskey immediately fires several rounds with his pistol into Blake’s backside, at least 7 times. We cannot hear what anyone is saying in the video or whether Blake made some type of threat of violent retaliation. Yet the mass media, together with Black Lives Matter, have already come to a verdict of cold-blooded “murder” while NBA teams have begun boycotting their playoff games, in the wake of the shooting to encourage the prosecution of Sheskey.

The end result, medically speaking, was that several bullet entry wounds were discovered after Blake was rushed to intensive care. He now has life-threatening wounds to his intestine, stomach, and liver and he faces permanent paralysis from the waist down with a severed spinal cord. Blake’s attorney, Ben Crump, said it would be a “miracle” if he ever walked again and later confirmed that he did not have a weapon in the car,  However, according to a BBC News update, “Officers found a knife in Mr Blake's car.”

Furthermore, according to the BBC, President Trump has sent at least “200 FBI and US Marshalls” to Kenosha and Wisconsin Governor Tony Evers has authorized 500 members of the National Guard to help quell the ongoing violence, despite an 11-hour nightly curfew enforced from 8 pm to 7 am. US President Donald Trump confirmed on Twitter that he sent federal law enforcement to Kenosha to counteract "looting, arson, violence, and lawlessness on American streets".

The surge of violence peaked with two men being fatally shot, while a third man is still in critical condition after a 17-year-old counter-protestor, Kyle Rittenhouse, has been arrested for first-degree murder. According the Insider, the young Rittenhouse, who used a semiautomatic rifle to fire at the men, “idolized police” and “participated in programs aimed toward youth who aspire to work in law enforcement.” Also, according to the Insider, there had been proposals in Kenosha County to “deputize” private citizens to help control the violence. Yet, as we read, the decision was taken not to delegate the sheriff’s authority:  “Kenosha County Sheriff Dan Beth said Wednesday that the violence that carried out was an example of why he doesn't want to encourage civilians to take up arms on behalf of law enforcement…. ‘Yesterday I had a person call me and say why don't you deputize citizens who have guns to come out and patrol the city of Kenosha,’ Beth said. ‘And I'm like oh hell no…What happen last night ... was probably the person reason why I wouldn't… That would have been one deputy sheriff who killed two people and the liability that goes with that would have been immense’.’"

In the run up to the U.S. presidential elections on November 3, resolving racial tension among citizens, government, and police, will be the biggest influencer of ballots cast for Donald Trump or Joe Biden, surpassing the handling of ongoing troubles with COVID containment and economic woes. No doubt, American police officers have suffered from all the stress and tension, leading to apparent overreactions of firing weapons at suspects for fear of violent retaliations against them. We must stay tuned to further evidence of what exactly was exchanged verbally between Blake and Kenosha County police, which led to the perhaps unintended overuse of force by police.

What does matter is that police, in the meantime, must become extremely prudent, especially with the use of firearms, unless their lives are in unequivocal danger. The police reforms that the Trump administration is pushing through must also be given time to have a lasting effect on the nation.

One final consideration, as Fox News commentator Tucker Carlson controversially said last night on television: “Kenosha has devolved into anarchy, because the authorities in the city have abandoned it...How shocked [then] are we that 17-year-olds with rifles decided they had to maintain order when no one else would?"  Violence breeds violence, to be sure, as “unrule” leads to the “unruly” mob.