If Biden makes it to the White House, Vice President Harris and in particular her husband Douglas Elmhoff will be the real drivers of change. They will stage the new happy normal of gender equality and extended broken families. 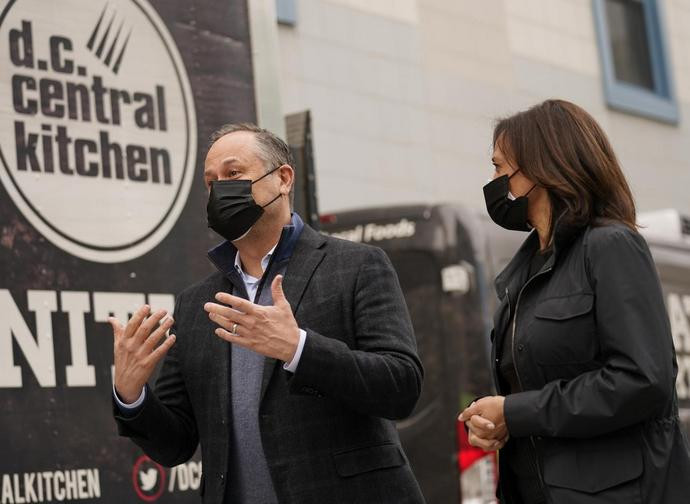 President Donald Trump has accepted a formal transition of US government should start for President-projected Joe Biden to take office. With this first step closer to the contested election-winner’s finishing line, eyes are fixed on the podium. As it stands, the biggest trophy will go to Kamala Harris. She will become the first female black Vice-President on January 20, 2021 and her spouse since 2014, Douglas Emhoff, will stand next to her in his own right. He will become the first "Second gentleman” and the highest-ranking husband in electoral history. Americans will have two ground-breakers for the price of one (vote). With each day, anticipation on what that new position could look like is gaining momentum.

In fact, the scope for Mr Emhoff’s new role has sparked a lively debate in the media. The balance tilts between him being content to make history and making use of his chance to write it as well. Pundits say he might keep to the old beaten track of tea parties, official guided tours and embrace an uncontroversial good cause within his field as a lawyer. But those who argue that he will opt to be an innovative barrier-breaker are taking the lead because it’s the role outspoken critics would like him to cut: the grand champion of the cultural shift that’s disowned America’s Christian heritage.

At the forefront of everyone’s minds is that Mr Emhoff and Ms Harris will be the first to assume positions that have always been held exclusively by the opposite gender in American politics. But the fact that 56 year old Mr Emhoff will resign his position at DLA Piper by Inauguration Day to avoid a conflict of interests when his wife becomes Vice-President, is being hailed as a man in his prime who is willing to give up his career for his wife’s. At long last, the first real step towards gender equality for political spouses is about to be taken and the subject of gender norms is on the table.

This is probably how Mr Emhoff will leave his thumbprint on history and where the clamour starts. Men who have given way to successful women in their lives, complain they still have to jostle with long-standing prejudices against men assuming a traditionally female role. They claim they are still up against bias despite the statistics demonstrate that breadwinning mothers are the US norm. And considering their plight is largely ignored by the media makes them a nonentity. Douglas Emhoff’s rise to political prominence is their chance to become visible. The paradox is that his millionaire lifestyle bears little resemblance to that of the majority whose cause he is called to champion. Mr Emhoff and Ms Harris who first met on a blind date now share a $5 million home in the exclusive Brentwood neighbourhood of Los Angeles and have apartments in Washington DC and San Francisco. If the truth were said, they could both stop working and still live very comfortably for the rest of their lives.

So what is the allure that’s keeping everyone hooked? It’s the idea of a new happy normal. Divorced and remarried Mr Emhoff comes across as your regular nice guy that most people can mirror themselves in but who at the same time appears immune to all situations of potential conflict. He makes a life that resembles crossing a minefield (see these divorce rates and their consequences) seem effortlessly joyful and attainable.

The smiling photos of the happy couple on the campaign trail testify to how much he relishes his role as Ms Harris’ political partner and that men who give way to more prominent women are on a par and can be just as happy as those in traditional unions. He makes relationships founded on blind dates work too and newly found love after a divorce from a marriage that produced two children a success. His second “love at first sight” celebrates multiculturalism and was followed by a politically correct quiet ceremony presided over by Ms Harris’ sister less than a year later. The all-inclusive marriage ceremony honoured his Jewish faith and her Indian heritage.
Mr Emhoff and his first wife Kerstin Emhoff married for 16 years are not only on best terms but their friendship has extended to a threesome to include Kamala Harris. Kole and Ella Douglas’ children from his first marriage affectionately call Kamala Harris “Momala” in recognition of her role as their fully accepted step mother. Now Ms Harris and Mr Emhoff are on course to bring their new Camelot to the White House and render what has always been considered the scourge of modern society a happy normal.

This is the real victory. When the record breaking firsts become today’s social norms, the scene is set not only to change public opinion but convert the soul of society.
We will know for certain on December 14 if this is the sort that waits America. Only time will tell if America’s expected new high will turn out to be a new low in history.