“John Paul II and I, what joy the cause for his sainthood”

“Among the witnesses there were both lay people and priests, they all spoke of Wojtyla as ‘our Pope’. It is striking that they were people from all walks of life and from all over the world, but with a deeply rooted opinion of his saintliness.” The Compass interviews Monsignor Sławomir Oder, returning to Poland after 36 years in Rome and well-known postulator of the cause for canonisation of John Paul II, whose 16th anniversary of death fell on 2 April. 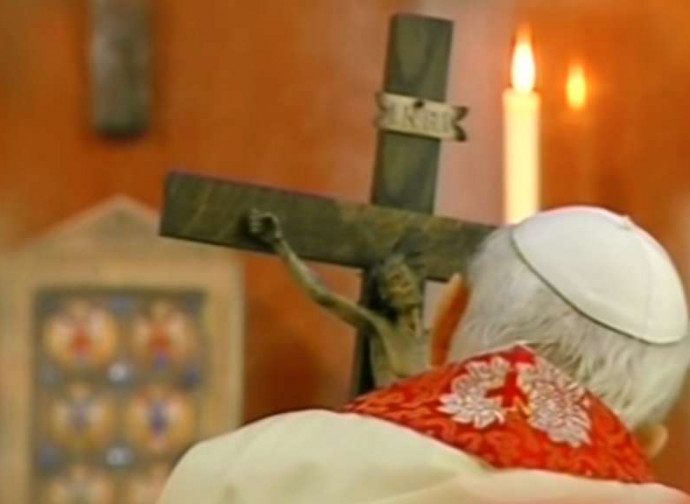 He spent 36 years in Rome: here he studied and trained as a priest, here he worked for almost 30 years in the Vicariate, for some time as president of the Court of Appeal and the last eight years as president of the Ordinary Court of the Diocese of Rome. But Monsignor Sławomir Oder is best known as a postulator in the cause of beatification and canonisation of John Paul II. This year, this Polish priest decided to return to his country, to his diocese of Toruń. The writer met Monsignor Oder after the last Mass he celebrated in the Roman Church of St John the Baptist of the Florentines (in the photo, near the reliquary of John Paul II).

Monsignor Oder, you worked for many years in the Vicariate of Rome, but you are mainly known as postulator in the process of beatification and canonisation of John Paul II... 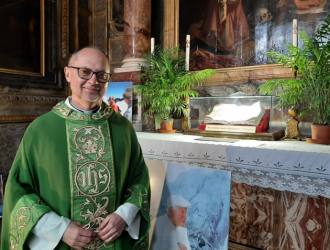 It is true. Divine Providence made sure that I did not get bored. In 2005, I was appointed postulator of the cause of beatification of Pope Wojtyla. It was a period of very intense work, but also a great spiritual adventure that completely filled my existence.

During your years in Rome, you were able to follow John Paul II’s activities “live” and, as postulator, you also studied the testimonies of people who had contact with the Pope at different times in his life. What struck you most about these testimonies?
There were many witnesses in this process, because the figure of the candidate to the altars was exceptional and required analysis on several levels. Among the witnesses were lay people and priests, monsignors and cardinals, religious men and women. There were lay people who knew the Holy Father as head of state, i.e. presidents, prime ministers, crowned heads, but also those who helped him in the papal flat, the staff of the technical and security services. Everyone said with one voice that he was ‘our man’, ‘our Pope’: this was due to the fact that John Paul II had the ability to enter into an individual relationship with each person. People felt his presence in their lives as someone close. Also striking in the testimonies was the witnesses’ conviction of his saintliness, which no one doubted. This saintliness was evident in the way he celebrated the Eucharist, in his zeal in proclaiming the Gospel, in bringing Christ to people all over the world. He was a man who exuded a depth of spirit that expressed his most intimate relationship with God, but at the same time knew how to enter into an authentic and direct relationship with every human being. This was the common denominator of the various testimonies.

So, during the process you became convinced of the general opinion on the saintliness of John Paul II? 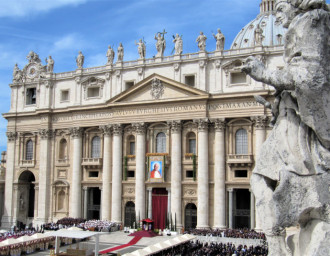 Yes, I travelled a lot with the members of the tribunal and had the opportunity to experience a deeply rooted opinion of the holiness of John Paul II. What is striking is that these opinions came from people from all walks of life and from all over the world. I would also like to draw attention to the fact that Benedict XVI gave his consent to start the cause of beatification (in the photo, a moment of the ceremony to proclaim him blessed) without waiting five years from the moment of his death, as required by the norms. The dispensation was due to the fact that John Paul II returned to the house of the Father in the odour of sanctity, as testified also by his funeral, which became a worldwide event. Millions of people came to Rome to pay homage to him, convinced of his holiness. When during the process I visited non-Christian countries, where the concept of sainthood is unknown, people referred to John Paul II as a “man of God”, a “good man”. For example, in Egypt, where we went with the tribunal to collect testimonies, people remembered with great emotion the person and the visit of the Pope to that country. After his death, Egypt, a Muslim country, declared national mourning. Another proof of his reputation for holiness were the tens of thousands of letters that the postulation received from all over the world, as well as the many graces - received through his intercession - that were reported to us.

Even after the canonisation of John Paul II, you continued to travel a lot and witnessed the worldwide cult of Wojtyła. Could you say something about this?
After canonisation, the interest in the person of St John Paul and his cult are not diminishing, on the contrary. His magisterium and his legacy are still alive today. For example, not everyone knows that several religious congregations have been established whose charism is to spread and cultivate the legacy of John Paul. In the United States, the congregation of the Sisters of the Sacred Heart of Jesus and the Heart of Mary was founded. They work among the laity, organise symposiums on John Paul II and pilgrimages of his relics in the USA and South America. I am impressed by their activities. Another congregation inspired by his spirituality is the small congregation of the Apostles of St John Paul II, which works in Burma, proclaiming the Gospel of Mercy among the poorest and entering into a relationship with the Buddhist world. There are many such initiatives.

The Church presents saints and blesseds as models for the faithful, both lay people and priests...
John Paul II can be an example of how to live one’s life authentically, as a time of love. At the beginning of his pontificate, the Pope wrote words that explained what had led him to be elected to the See of Peter: “Debitor factus sum”, “I have become a debtor”. He was settling his debt of love. That is why John Paul II teaches everyone, lay people and priests, to live every moment of life as a payment of a debt of love.

What does St John Paul II teach more specifically to priests?
What struck me most about the Pope was his experience of the priesthood, which determined who he was. His strength came from being an authentic priest united to Christ. He lived his priestly identity in every role for which he was called: simple priest, academic chaplain, university professor, bishop, cardinal, and finally pope. He loved the Gospel passage of Peter’s dialogue with the Risen One: “Simon, son of John, do you love me more than these?”. In this dialogue, he found himself as a disciple. This gave rise to his great humility, which led him to meet Christ every day on his knees, before the tabernacle, listening to the word of God, looking at the example of His cross. That is why the icon of his pontificate is the scene of the last Good Friday, when he embraces the cross, gazing at it.

What is happening in Poland? Why is St John Paul II, the greatest Pole in history, being attacked and denigrated today in certain Polish circles?
This is a very painful question for me. In general, we can say that we are witnessing a neo-Marxist revolution taking place not only in Poland but all over the world. This revolution strikes at the symbol of the values that Christianity represents and which recently have been identified with the person and teaching of John Paul II. It is not just a question of the Pope, but of the general confrontation of two visions of the world and of man: the vision of a ‘new civilisation’ imposed by neo-Marxist and liberal circles that wants to replace a civilisation inspired by Christian values, symbolised by John Paul II.
We must not forget, however, that the Church is a divine-human reality and therefore marked by human sins and weaknesses. And it is precisely human sins that become the exposed side of the Mystical Body of Christ. Hence the attempt to attack the Church and John Paul II from the perspective of the negative aspects of the Church’s life marked by human sin.

During the last Mass you celebrated in the Church of St John the Baptist, you spoke of yourself as a ‘Roman priest’. What does that mean?
To be a “Roman priest” means to be formed in the spirit of the universal Church. I had the great privilege to serve the local Church of Rome, led by the Bishop of Rome, the Pope. It was a great honour and joy for me, also because my role as postulator of the cause of beatification of John Paul II was part of this service.

After 36 years in Rome, you are returning to Poland. What are your projects?
I am going back to Toruń and I will put myself at the disposal of the Bishop who will decide what I will do, according to the needs of the local Church. And I will try to serve my Church in Toruń, to which I have always felt attached, with the same love with which I served the Roman Church.