John of Capistrano, icon of the Battle of Belgrade

At the invitation of Pope Callistus III, St John of Capistrano recruited 35,000 Hungarian Christians, ordinary citizens, to fight the Turks besieging Belgrade. Joining the soldiers led by John Hunyadi, on 22nd July 1456, they defeated a much larger army. And the evening before, John had blessed a meal....
- THE RECIPE: GOULASH 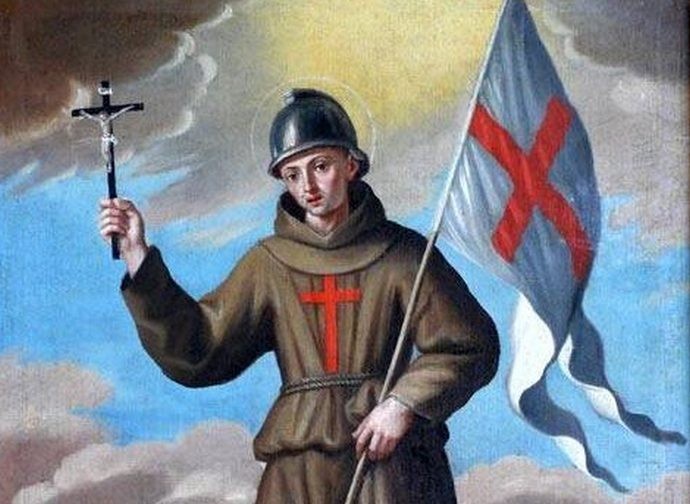 Belgrade, 21st July 1456.
The battlefield is strangely silent, despite the tide of men covering the riverbank. In the distance one can see the towers and walls of the city, partly destroyed by Turkish cannons, which are burning. Here and there, huge cauldrons placed above campfires fill the air with the aroma of cooking food: meat and pulses, paprika, spices. The men are sitting on the ground, each with their weapons beside them and a rough rolled-up blanket, which they will use to cover themselves for the night. There are no tents, nor any other comforts: fortunately it is warm at this time of year.

They wait for the priest to finish passing from one group to another to bless the meal before they start. Then they see him walk over to a cauldron and fill his own earthenware bowl with steaming goulash. From one of the large metre-high baskets full of rather dry bread, he takes a piece of bread, which he drops into the bowl to soak it in the sauce of the tasty and somewhat liquid dish. The priest sits down, places the bowl on his lap and begins to eat in silence, with measured gestures.
The men get up in groups and stand around the cauldron, filling their bowls and then, giving way to the others, going to sit down to eat.

They are not soldiers by trade; they were recruited by the priest himself to fight the Turks. They come from various parts of Hungary; they are all motivated by the desire to prevent the nonbelieving Ottomans from taking Belgrade, which is part of the Kingdom of Hungary.
Further away are the real soldiers, mercenaries, hired by John Hunyadi. Finally tomorrow they will all fight together. They have been on the road for ten days, with the aim of giving battle to the Ottomans who have held Belgrade under siege since 4 July. Hunyadi himself conceived the battle plan and devised the strategy.
The priest has motivated them all, even the mercenaries, with his fiery words and sermons about the duty to make God’s word triumph.

Tomorrow will be the big day, the day of the decisive battle. In fact, the next day, 22 July 1456, the siege of Belgrade would end with the victory of the Christians against the Turks. The Turks had been besieging the city for days, led by Sultan Mehmed II, who had gathered forces to conquer the Kingdom of Hungary. His immediate objective was to seize the fortress of the city of Belgrade.

John Hunyadi (1407-1456) was a Hungarian nobleman, a warlord (voievod) of Transylvania, who, with courage and faith, had developed a daring military strategy, which had led the Christians to victory, despite being significantly fewer in number than the Ottomans. 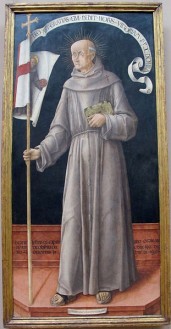 The priest is John of Capistrano, who played a decisive role in this battle, not only because he motivated the fighters with his words, but also because he managed to put together part of the Christian army.
He was born on 24 June 1386 in the Kingdom of Naples, more precisely in Capestrano, a town in the province of L’Aquila in Abruzzo. His father, a German baron, had come to Italy as a member of the court of King Ludwig I of Naples. He had married a woman from Abruzzo.
Their son John studied successfully at the University of Perugia and married some time later without consummating his marriage.
He became a lawyer in 1412 at the age of 26, thanks to his mentor Baldus de Ubaldis. He taught at the same University of Perugia, of which he was governor, obeying Ladislaus I of Naples. However, the city was the subject of a power struggle between the people of Rimini and the army of Sigismondo Malatesta. Taken prisoner and reflecting on life, he came to the conclusion that money was not important and decided to dedicate his life to the pursuit of holiness by entering the Franciscan order in 1416, after his widowhood. The following year he was ordained a priest, and became vicar general; his teacher was St Bernardine of Siena, who had a great influence on his development.

He then began to preach the Gospels in Europe, first in Germany (where he preached crusades against the Hussites and converted more than four thousand people), then in Austria, Hungary and Poland. He taught in public places, where many people came to listen to him, and was soon nicknamed the ‘holy preacher’. He fought against witchcraft and all forms of heresy. His sermons lasted from two to three hours. He had a frugal lifestyle, slept and ate little, and had a charitable attitude towards his neighbour.
In addition to his preaching ministry, he served as a personal advisor and envoy (ambassador) to Popes Martin V, Eugene IV, Nicholas V and Callixtus III, being known for his prudent diplomatic decisions. He was thus sent to the cities of Milan and Bologna and continued his work in Germany and Poland.

Finally, we thus come to the Battle of Belgrade. After the conquest of Constantinople in 1453 by the Turks, Mehmed II (1432-1481) prepared the invasion of Hungary, and came with an army of a hundred thousand men to invade Serbia in 1455. At the invitation of Pope Callistus III, John of Capistrano undertook to recruit Christians from Hungary. He gathered almost thirty-five thousand men, the majority of whom were farmhands, artisans and students, who joined John Hunyadi’s almost fifteen thousand mercenaries. Forty-five thousand Christians against one hundred thousand Ottomans.

The Ottoman and Christian armies faced each other in Belgrade on 22 July 1456. John of Capistrano exhorted the soldiers with a flag adorned with a cross and the cry “Jesus, Jesus, Jesus”. With the fervour of his exhortations and prayers, he encouraged the believers and engaged in defending the freedom of Christians, contributing greatly to the victory against the Turks. Representatives of the Christian army said of him: “This father had more authority over the soldiers than their military leaders”. 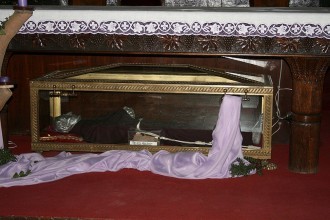 After the victory over the Turks, Belgrade and other cities had to face the plague, and John of Capistrano died of this terrible disease a few months later, on 23 October 1456, in Ilok, Slavonia (today eastern Croatia). He was 70 years old.
His cult as a blessed was confirmed on 19 December 1650, then he was canonised on 16 October 1690 by Pope Alexander VIII.
He is the protector of military chaplains and jurists. In sacred images he is often depicted wearing the typical habit of friars. The body of St John of Capistrano is kept in the Franciscan Church of St John of Capistrano in Ilok, Croatia.