Italian seminary: not vaccinated, no place for priesthood

The priest of tomorrow will not need to be saintly, but vaccinated. The glorious seminary of Milan has become the first educational institution to impose compulsory vaccination. A letter to the 120 seminarians reads: “You must all be vaccinated before returning from holiday”. The vice-rector, in turn, confirms the decision to the Daily Compass: “We are doing it to return to a more serene life”. And the seminarians who are against it are branded ideologues. 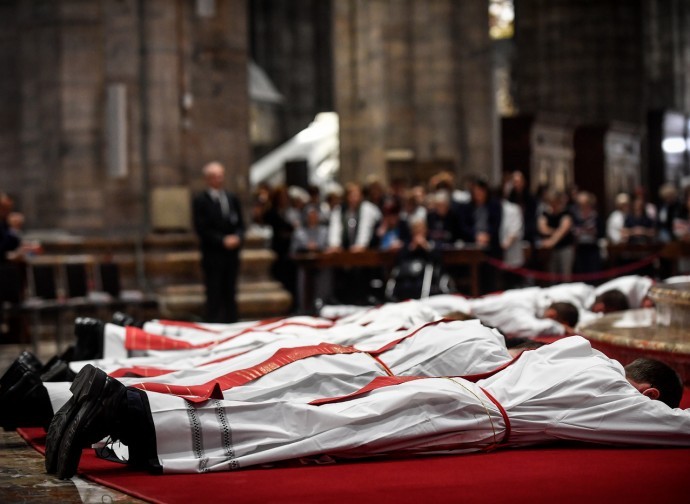 Saintliness? Not any more. The first requirement for a good priest is to be vaccinated. This is what has been established by the episcopal seminary of Milan - the largest seminary in Italy - which has set the vaccine as a condicio sine qua non for the 120 aspiring priests who next September 12, will return to Venegono, the town in the province of Varese where the “citadel of seminarians” is located.

A letter from the rector don Enrico Castagna is clear: get vaccinated and show charity towards each other; this is the message of the letter that the Daily Compass has seen. Compulsory vaccination, without bypasses or byzantine Green Passes: not even the Italian State has gone that far. Do you want to become a priest? Get vaccinated and then we'll consider you.

The Daily Compass sought confirmation of the indiscretion and, after contacting the rector, was able to speak, with his consent, to the vice-rector, don Michele Galli, in charge of the Covid protocol, that trains priests for the largest diocese in Europe. And he confirmed the draconian measure, which appears at the moment only taken by Milan, since there is no news from other Italian seminaries.

“Given the epidemiological situation, we are changing our approach,” explains don Michele. “The state decree-law, in particular regarding schools and universities, has guided us. In fact, we’ve covered the part about university and community, but the decree does not mention religious communities so we had to make our own provisions”.

How? We ask. “By leveraging the vaccine, we have asked the seminarians to get vaccinated by their return on 12 September, because this will enable us to use the classrooms and common areas without wearing masks, since the school decree allows classes that have completed the vaccination cycle to be exempt from wearing masks”.

Don Michele refers to one of the most disturbing passages addressed to schools, which, it has been noted on several occasions, will create the unpleasant situation of superior vaccinated students blaming inferior unvaccinated ones for still being obliged to wear masks. This is barbaric, a pillory – so much for fighting bullying in schools! Knowing that the very seminary that has formed saintly priests in the last century has chosen to rely blindly not only on state regulations, but also on its most barbaric, as well as scientifically questionable, declensions, is astounding.

But what will the seminarians do? Will they all get vaccinated? One can’t help wondering, but the vice-rector does not consider this a major problem. “At the moment no-one has informed us of any opposition, but if cases arise, we will assess them on an individual basis. For example, if someone cannot be vaccinated for medical reasons we will consider it, but if the reasons are more of an ideological nature... well... I don't know, we haven't discussed the issue yet, but I don't think they will cause any problems”, he says, cutting short the discussion.

The spectre of expulsion is not mentioned, but according to the words of the vice-rector, it is not completely ruled out either, given that the no-vax seminarian is branded an ideologue: for whom there must be no escape route or alibi.

We asked whether the decision was shared with Archbishop Mario Delpini, who was once also rector of Venegono Inferiore. “No, it was taken independently as a seminary council, but on the other hand we feel encouraged in this decision also by the note of the Congregation for the Doctrine of the Faith, which expressly encouraged vaccination”.

To tell the truth, there is no evidence of such explicit encouragement from the former Holy Office, indeed, the CDF has also stated that vaccination should not be imposed, but it is clear that this was not taken into account.

Finally, a provocation: why vaccinate everyone in a communal environment where after a month of living together they will practically be like non-related cohabitants? Moreover why, since the vaccine does not stop contagion? “Because in any case we all have to leave the seminary to visit the parishes and this will allow us to live more freely and serenely”. At this point, we don’t know how tomorrow’s priest will guide us towards the heavenly Jerusalem, but we do know, he will certainly be armed with the sacred inoculum. The matter is closed.