Inventive cheesemaking by the monks

In the Middle Ages cheese was the food of the humble par excellence. Benedictines, Cistercians, Trappists, Franciscans and Dominicans have created many legendary cheeses, especially in France (from Munster to Maroilles), but also in other parts of Europe. The pride and joy of Italy, Parmigiano, is also monastic in origin. Here is an overview of the most famous products.
- THE RECIPE: BROCCOLI GRATIN WITH PARMESAN CHEESE 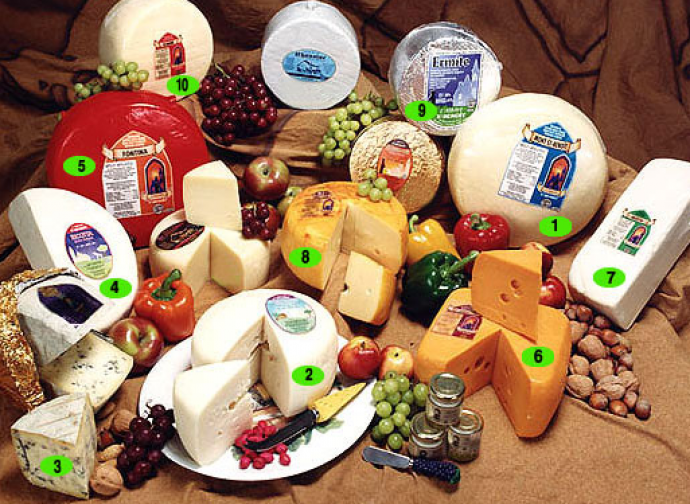 Since the earliest times, monks have created many local products: wine (essential for Mass), beer, sweets, pasta and - last but not least - cheese.

Both frugal and nutritious, cheese was in the Middle Ages an everyday food and the food of the humble par excellence. A true food preserve, cheese also chimed with the ideal of a simple life desired by Saint Benedict: monks rarely ate meat, so dairy products and cheeses constituted the proteins of their diet.

The monks were not only an intellectual elite (because they knew how to read and write), but also a free and high-end workforce: they not only “invented” and developed many types of foods and ways to preserve them, but they also left written recipes. It is fair to think that other “inventors” created cheese recipes, but the monks were almost the only ones who knew how to write down their recipes (after all, recording knowledge was also one of their missions).

Benedictines, Cistercians, Trappists and later Franciscans and Dominicans are the creators of many legendary cheeses, especially in France where, of the 1,200 existing varieties, 70% originated in abbeys and monasteries. To name them all would be impossible, but here are just a few: Munster (in Alsace), its name derived from the Latin monasterium, Cîteaux, Maroilles, Tamié, Laguiole, Cantal, Saint Maur, Epoisses, Pont-L'Evêque, Coulommiers, Bleu de Gex, Abondance, Port Salut, Echourgnac, Mont des Cats, Iraty, Pierre-Qui-Vire, Gérômé, Saint Nectaire and many others.

For centuries the French religious have contributed to the development of this flagship gastronomical product, not only French but European. Great travellers, because they went on pilgrimages or were moved to other monasteries, the monks passed on techniques and secrets of cheesemaking. Many European PDO cheeses today have very ancient roots in monastic tradition.

Munster was created by the monks of the Monasterium Confluentes in the 7th century in the Fecht valley on the Alsatian bank of the Fecht, it was a Munster Kaes, the ancestor of today's cheese of the same name. Laguiole originated in the Abbey of Aubrac in 1120 to supply the pilgrims who stopped here on the road to Santiago de Compostela. Maroilles (see photo), another excellent French cheese made from cow's milk, was only matured by the monks, who bought it fresh from local farmers. In 960, at the request of Enguerrand, bishop of Cambrai, the monks aged it longer, going from five to seven weeks, obtaining an extraordinary cheese. Unlike other cheeses, which go well with wine, this one is excellent with beer: an “abbey beer”, highly fermented, like Angelus or Choulette.

The list of French cheeses produced by the monasteries is extensive, but we will stop here.

England also has a rich monastic tradition in cheesemaking. In 1152 there were 54 Cistercian monasteries in England, many of which produced sheep's and cow's milk cheeses. In an accounting document of Henry II King of England (1133-1189), mention is made of “a wagon of Cheddar cheese” from Byland Abbey (dissolved in 1538 by Henry VIII; see photo), in Yorkshire.

In Switzerland we find the Tête de Moine (‘Monk's Head’), a cheese with multiple uses, produced at Bellelay Abbey since 1192: it was used to pay the farmers' taxes to the owners, to settle disputes, to be offered as a gift to the prince-bishops of Basel or as a medium of exchange. Bellelay cheese was renamed Tête de Moine at the end of the 18th century: according to stories told in the canton of Jura, it owes its name to a custom formerly practised at Bellelay Abbey, where the prior received a piece of cheese each year per “monk head”. This cheese is not cut into slices, but using a special tool that is inserted into the heart of the cheese, thin flakes are “scraped out”.

Trappist (Serbo-Croatian: Trapist sir/ Трапист сир) is a traditional Bosnian semi-hard cow's milk cheese produced by Trappist monks from Mariastern Abbey, Banja Luka, in Bosnia and Herzegovina. Its origins date back to the 18th century, when monks from the French abbey Notre Dame de Port-du-Salut arrived in Banja Luka, bringing with them the recipe for making an excellent cheese, which began to be produced here. The monks lent their name, Trappist, to the whole area, leaving an important legacy with the production of this famous cheese and of a beer.

Trappist monks are also at the origin of what is considered the smelliest cheese in the world: Limburger. Although it is considered a German cheese, Limburger originates from the region historically included in the Duchy of Limburg, now divided between Germany, Belgium and the Netherlands.

Italy, finally: the country of 600 cheeses can boast the monastic origin of its pride and joy, Parmigiano. Although there are few written testimonies regarding the history of Italian cheeses in general - a sign that it was a widespread food especially among the poorest people - Parmesan is the most documented: it is the cheese for which one can go back furthest in time and with the greatest continuity. Since the 12th century, the Benedictines of Parma and Reggio Emilia were known for the production of hard cheese (caseus parmensis). In 1200 the Po Valley was the main cheese market in Europe and already in the 14th century cheeses from Piacenza and Lodi were exported everywhere.

Cheese also began to appear on the nobles’ tables. Giovanni Boccaccio, in the Decameron, describes in the third novel of the eighth day the district of Bengodi, where “on a mountain, all of grated Parmesan cheese, dwell folk that do nought else but make macaroni and raviuoli, and boil them in capon's broth, and then throw them down to be scrambled for”.

The first historical documents that explicitly mention Parmesan cheese date back to 1344. In this year a register of expenses for the canteen of the Priors of Florence mentions among other items a “wheel of Parmesan cheese”. In the 14th century, the abbeys of the Benedictine and Cistercian monks continued to play a fundamental role in perfecting the technique and codification of Parmesan cheese. Its commercialization expanded in Romagna, Piedmont and Tuscany, from whose ports the cheese reached the centres of the Mediterranean.

In 1477 Pantaleone da Confienza, a doctor at the Savoy court in Turin, wrote the Summa lacticiniorum, the first treatise on cheese production, in which the author analyses the different production techniques and describes in detail all the cheeses then present on the Italian market. This work also has the merit of dedicating great attention to the most important foreign specialities, in particular French and English cheeses.

But it’s not just monasteries in Europe that produce cheeses. Let's take a look at what is happening overseas. Every day, in the monastery of Our Lady of the Angels at the foot of Virginia's Blue Ridge Mountains, the 13 resident nuns gather for prayer. Theirs is a simple Christian life of adoration and meditation. The sisters also follow the Benedictine tradition of combining prayer and work. In the last 20 years they have created their own version of Gouda, the tasty cheese from the Netherlands. Their artisanal production is so important that the Sisters are able to supply American supermarkets in different states with their one kilo Gouda wheels.

We remain in North America to mention two Canadian productions, both from Quebec. Oka cheese, created by the Trappist monks of the monastery of Oka, is an excellent product, known and much appreciated by enthusiasts, which is now produced by a lay cooperative, Agropur, because the fathers sold the brand and the recipe in 1981. We cannot leave Canada without mentioning the Abbey of St Benedict, founded in 1912, where the monks have come to produce ten types of cheese (see main photo, above), the first and most famous being Mont St Benoît.

Finally, let us mention a Mexican cheese, Oaxaca (similar to mozzarella, but in the form of a ball made from long strips of cheese), which, although today is produced by lay companies, has remote origins in the 17th century, when the monks of the old convent of Tepoztlán (now a museum) learned the technique from the local Indian people, who had already been producing it for various centuries.

Thus monks from all over the world have left their cultural imprint not only on the arts, science, literature, calligraphy, typography, but also on food. We must never forget this.

This “monastic cheese tour” is not exhaustive, due to lack of space. But it already gives us food for thought about the enormous importance of monasteries in the creation of human food culture. After the “panem et circenses” of the ancient Romans, we have the “panem et caseum” of the monks, food that goes well with the wine, also produced by them. Good today, yesterday and always.