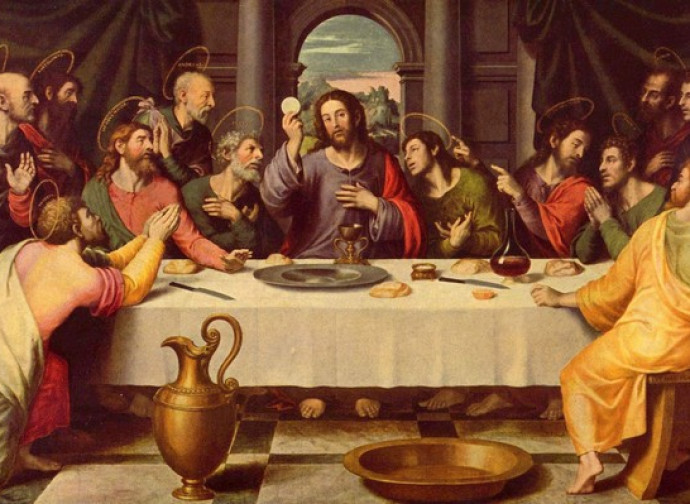 On the liturgical level, Holy Thursday includes the Chrism Mass celebrated in the morning in cathedrals - during which the bishop solemnly consecrates the holy oils and in particular the Sacred Chrism - and the Mass in Coena Domini. The latter, which marks the actual beginning of the Triduum, is celebrated in the late afternoon or in the evening to commemorate the Last Supper with the Apostles, when Christ “knowing that his hour had come to pass from this world to the Father, having loved his own who were in the world, he loved them to the end” (Jn 13:1).

At the Last Supper, Jesus and the Twelve celebrated the Jewish Passover Festival, the memorial of the salvation that God had given to Israel, a slave in the land of Egypt, “passing over” the homes of the Jews and manifesting His liberating power. Just as the blood of a lamb on the doorposts had saved the firstborn Israelites, so Jesus - the true Lamb, announced by the prophets - manifested that only His sacrifice is the source of true salvation. Source, therefore, of liberation from the slavery of sin, prelude to the new Passover and eternal glory for those who love Him. He is God who makes Himself Servant, teaches the apostles to serve one another and, with the gesture of the washing of the feet, overturns the ideas of greatness typical of the world. To the point of condensing everything in these words: “This is my commandment: that you love one another, as I have loved you. No one has a greater love than this: to give your life for your friends”. That as I have loved you is the imperative to live according to the Divine Will, in love and truth.

The plan of Mercy contained in the Last Supper has its culmination in the institution of the Eucharist. Jesus thus gives himself as “Bread of Life” to help everyone to remain firm in the face of the “mystery of iniquity” that grips the world and to win the spiritual battle. His words are very clear in the act of blessing and breaking the bread: “Take it and eat it. This is my Body”. And again, after the blessing of the chalice: “Drink of it all, for this is my Blood of the covenant, shed for many, in remission of sins”. He, Eternal Priest, also instituted at the same supper the Sacrament of Holy Orders, to perpetuate over the centuries the total gift of Himself (“do this in memory of me”) through His Church, founded on the apostles, first and foremost Peter. He prayed for them and announced both the persecutions they would suffer in His Name and the faithful who would follow them: “If they have persecuted me, they will persecute you too. If they have kept my word, they will keep yours too”.

Judas' betrayal and the arrest in Gethsemane remind us that Jesus is a sign of contradiction between those who love Him and those who reject divine love, even to the sacrifice on the cross of the Only Begotten One. Between he who, even in human weakness, trusts and asks forgiveness from a Father who loved him first, and he who does not recognise himself as His son. For this reason Jesus consoles himself in Peter, to whom he announces his denial, but knowing his faith, says: “Simon, Simon, behold, Satan has sought you out to sift you like the wheat; but I have prayed for you, that your faith may not fail; and you, once you have turned back, strengthen your brothers”. (Lk 22, 31-32). And he consoles himself in John who, at the announcement of the betrayal reclined his head over the Heart of Jesus, in the other apostles, and in all his flock. Writing about the Last Supper, the most humble Servant of God Luisa Piccarreta made the following comparison: “It is at this solemn hour that in the two disciples are depicted the two peoples, the reprobate and the chosen one: the reprobates in Judah, who already feels hell in his heart; the chosen ones in John, who rests and delights in You”.

The celestial revelations received from Piccarreta also help to reflect on what Jesus felt in the Garden of Olives and on the meaning of sin: “In this agony the most unbearable pain was when all the sins came before Me one by one, my Humanity understood all their enormity, and every crime bore the imprint 'death to a God' [...]. Before the Divinity the guilt appeared to Me so horrible and more horrendous than death itself; in understanding only what sin means, I felt I was dying and I really was dying of it [...]; I cried out to all creatures who had pity on Me, but in vain” [cf. The Hours of the Passion].

At the end of the evening Mass on Holy Thursday the Eucharist is placed in the altar of repose (while the rest of the church generally remains in darkness and the bells are silent). It is at that altar that the faithful can adore the Blessed Sacrament until the afternoon of Good Friday and meditate on the Mysteries of the Passion, especially the mortal sadness experienced by Jesus in Gethsemane. It is a good time to comfort Our Lord, as Mary did taking part in His sorrows and as did the angel that descended into the Garden.