The 117 martyrs of Vietnam that the Church celebrates today remind us of how the Christian faith has been enlivened and transmitted over the centuries thanks to the example of many luminous witnesses, who accepted to sacrifice their lives to follow Christ crucified. 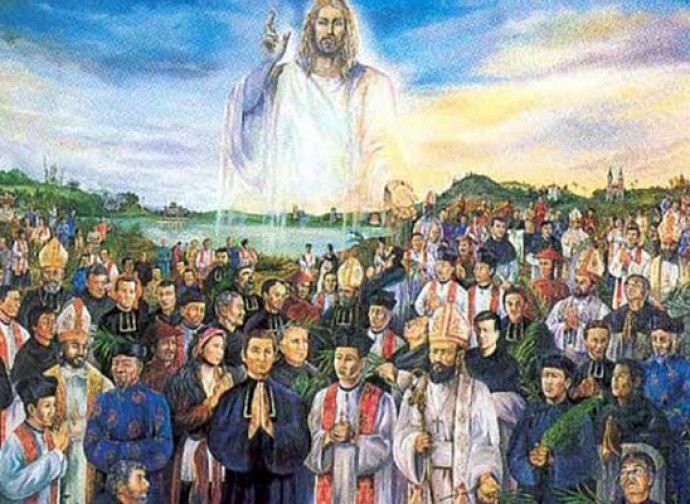 The blood of the martyrs is the seed of new Christians, Tertullian said. And certainly the 117 martyrs of Vietnam that the Church celebrates today remind us of how the Christian faith has been enlivened and transmitted over the centuries thanks to the example of many luminous witnesses, who accepted to sacrifice their lives to follow Christ crucified. This group of saints, martyred between 1745 and 1862, includes 8 bishops, 50 priests and 59 lay people, including a mother and many male family members. Ninety-six of them were Vietnamese, 11 Spanish Dominicans and 10 Frenchmen from the Society for Foreign Missions of Paris. In the majority of cases they were executed by beheading (75), while the others were strangled, burned alive, dismembered or died in prison as a result of torture.

For these 117 martyrs the Church was able to ascertain the circumstances of their martyrdom, but their names represent only part of the multitude of people slaughtered in Vietnam for their faith in Christ: from 1645 to 1886 there were in fact 53 edicts against Christianity, and between 130 and 300 thousand Christians were killed. During the empire of Minh Mang (who reigned from 1820 to 1841) even those who hid the faithful were condemned to death. But probably the most ferocious persecutions took place under Tu Duc (from 1847 to 1883), who had churches demolished, Christian families separated, villages suspected of hiding priests raided, and those who collaborated in the capture of the missionaries rewarded financially. Foreign catechists and Vietnamese priests were slaughtered. The local catechists were branded on their left cheek with a hot iron with the inscription Ta Dao, i.e. “perverse religion”. Christian laypersons could save themselves by trampling the cross before the judge, but many refused to do so.

The proclamation of the Gospel in Vietnam had begun in the 16th century and had obtained the first visible results in the following century, when the preaching of the Jesuits and in particular of Alexandre de Rhodes, later expelled from the country, had converted thousands of people. Since then the persecutions have persisted, alternating with moments of truce, and to this day they continue under the Socialist Republic.

The leader of the group of martyrs remembered today is the Vietnamese priest Andrew Dũng-Lạc. He was born of very poor pagan parents and was raised by a Catholic catechist, who inspired in him the priestly vocation. Ordained priest in 1823, he was a missionary in various places in Vietnam and was imprisoned several times by the local authorities. The faithful also paid ransoms to free him, but over the years the saint grew so much in grace that he ardently desired martyrdom. “He who dies for the faith, ascends to Heaven. On the contrary, we who continually hide, spend money to escape the persecutors! It would be much better to let ourselves be arrested and die,” said Andrew, aware that this was the cross for his eternal glory. He suffered martyrdom by beheading in Hanoi on 21 December 1839.

The 117 martyrs were canonised in 1988 by John Paul II, who proclaimed them patron saints of Vietnam two years later. The authorisation to canonisation had arrived in 1986 with the De signis decree, which established the uninterrupted fame of signs and miracles attributed to their intercession. As the holy Polish pontiff said in his homily for the canonization, “faced with the coercive dispositions of the authorities regarding the practice of the faith, they affirmed their freedom of belief, claiming with humble courage that the Christian religion was the one thing they could not abandon, since they could not disobey the supreme sovereign: the Lord. They also strongly proclaimed their willingness to be loyal to the authorities of the country, without contravening everything that was right and honest".