Saint Hildegard of Bingen, who lived in the 12th century, was one of the most complex and eclectic figures in history, not only of the Church. She was also a herbalist and naturalist and left a large number of recipes based on herbs, grains, spices, seeds, capable of restoring the balance between soul and body.
- THE RECIPE: CINNAMON BISCUITS 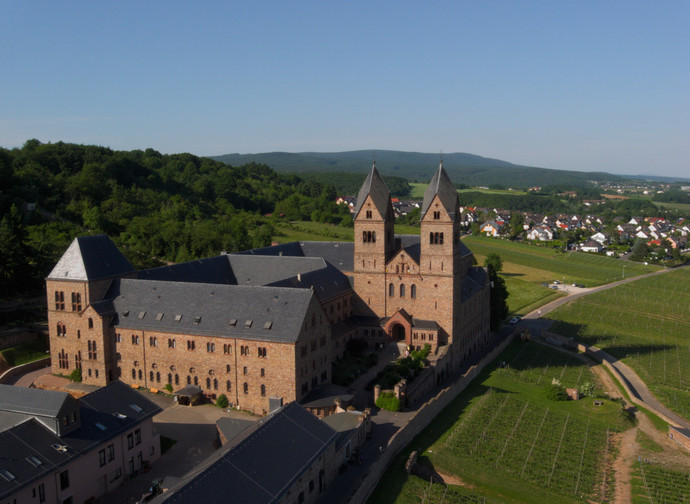 We continue the study of the recipes of the monasteries by talking about one of the most fascinating and complex figures in history (not only of the Church): Hildegard of Bingen (1098-1179).

Born in Bermersheim vor der Höhe, in Rhine Hesse, the tenth daughter of a German count who historians believe was a military man in the service of Meginhard of Spanheim, Hildegard was “given” to the Church at the age of 8 to be educated by Meginhard's sister, Jutta, a nun who lived in a Benedictine monastery. Hildegard took her vows at the age of 15. When Jutta died, Hildegard was elected Magistra of her community of nuns. Hildegard said she had visions of God all her life. The first “shadow of the living light” came at the age of 3 and the visits never stopped. She described one of them like this: “The heavens were opened and a blinding light of exceptional brilliance flowed through my entire brain. And so it kindled my whole heart and breast like a flame, not burning but warming”. At the age of 43 she said that God told her to “write what you see and feel” and for the first time she revealed her visions to the world.

Three centuries before the Renaissance, Hildegard was a Renaissance figure, due to her artistic and intellectual complexity: herbalist, naturalist, cosmologist, philosopher, artist, poetess, playwright, musician, doctor, linguist, founder of monasteries and political advisor, but also mystic, prophetess, healer and theologian.

She was beatified in 1324 by John XXII, one of the “Popes of Avignon”, instigator of a crusade and defender of the Armenian kings threatened by the Turks. She was canonized on May 10, 2012 by Benedict XVI, who also declared her a Doctor of the Church on October 7 of the same year. She is the patron saint of philologists and Esperantists. Hildegard has written nine books, seventy poems, seventy-two musical compositions and a play. She is also the creator of the first artificial language, the Unknown Language (opposite, which is why she is also the patroness of the Esperantists, at the behest of Pius X). Her books have been reprinted countless times in many languages and her music is widely performed today. A singular figure for her time, Hildegard of Bingen is the perfect testimony to the concept that an extraordinary personality is able to assert itself in any way and everywhere, despite the limits that time, sex, social situation or physical appearance may impose.

Pope Eugene III authorised Hildegard to preach in public. It was extremely unusual for medieval nuns to leave the monasteries or to express opinions in public, but the Pope was consumed by his battle against Cathar heresies and needed Hildegard's help. She took her mission as a preacher very seriously, inviting the Holy Roman Emperor and the leaders of the Church to convert and put an end to abuses.

By the time she was considered an authority within the Church, Pope Eugene III read some of her writings during the Synod of Trier in 1147. On that occasion, she was authorized to write and publicly display her visions.

But all these biographical details are common knowledge. Instead, what interests us is Hildegard's relationship with food; her vision of how much what we eat affects not only our body but also our soul.

Her recipe books are a hymn to originality, creativity and even technicality. Herbalist and great connoisseur of the plant world, Hildegard is the creator of naturopathy as a nutritional science. Her recipes based on herbs, roots, spices, grains, seeds, cereals, fruits, etc. are impressive (and very topical).

In her writings, Hildegard exalts the close relationship between soul, body and what we eat. Here is an example of a recipe: “Nutmeg has enormous warmth and a good mixture of forces. It has the ability to open the heart of the person who eats it, purifying the soul and giving them a good understanding. Take, as always, nutmeg and cinnamon in equal measure and a few cloves and powder them. Then with this powder, a small amount of breadcrumbs and some water make some cupcakes and eat them often and you will see that the bitterness of your soul will calm down and your heart and your numbed senses will open and your spirit will become cheerful and your senses will be purified. All the harmful fluids in you will decrease and your blood will receive a positive fluid that will strengthen you.

She gave great importance to fluids, which according to her studies, influenced people's character and determined their psychological and spiritual state.

Through natural resources, Hildegard was convinced that she could restore the balance between the Cosmos, Man and the Forces that regulate the relationship between them. For her, these three concepts had a universal meaning.

The Saint wrote: “The soul is the mistress, the flesh the maid, because it is the body that receives its life from its soul, therefore the soul has power, and the body, having received life, surrenders itself to the predominance of the soul [...] O man, look at man. For man has within him the Heavens and the Earth and all creatures. He is One, and all things hidden within him. Man is the enclosure of the wonders of God”.
Man's balance and health, according to Hildegard, is also achieved through an orderly, regular lifestyle, without excesses and, above all, following a balanced and varied diet.

Most of the preparations she suggests are actual health remedies that are administered in soups, wine, stews, bread, biscuits or pastes to be spread on bread. The fact that they were healthy recipes is unquestionable and Hildegard herself is the most credible “testimonial” of her theories of a direct relationship between healthy food, body and soul: in a time when life expectancy for women was 40 years (when they were lucky), she lived to 81, despite her sometimes fragile health.

Hildegard of Bingen lived 900 years ago, but her incomparable figure continues to be a great source of spiritual and intellectual inspiration.

(Part 1 was published on 6 September)