'Green' Church at the service of eugenics

The Vatican’s formal presentation of its "Pastoral Orientations on Climate Displaced People" marks the total subjugation of Church leadership to an ecological ideology, one that is anti-human at its core. While done in the name of defending the poor, it is actually a bullhorn for those who seek their elimination. 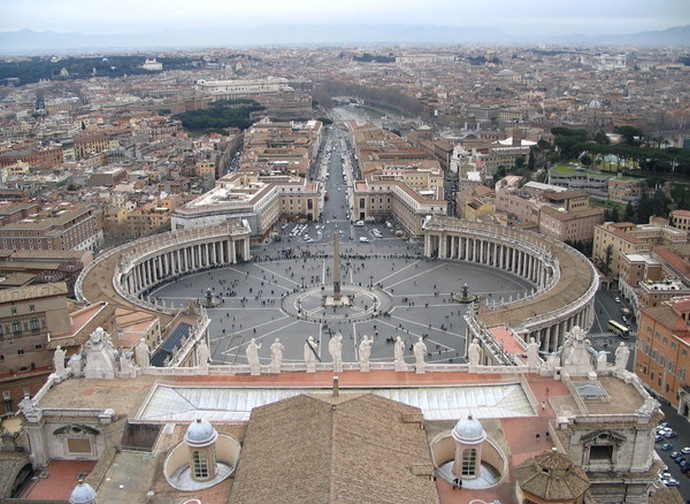 We can’t help but feel dumbfounded after reading the 26-page "Pastoral Orientations on Climate Displaced People." The Vatican document is replete with scientific and economic gibberish while sprinkled with warm Christian feelings and commitments to turn parish churches into WWF branch operations. It was presented yesterday at the Vatican with great pomp and circumstance and launched with a message from Pope Francis, so as to reinforce the importance the Holy See gives to ecological conversion, which - together with the theme of climate displacement - is the battle horse it mounts when defending migrants.

We are shocked to see how the Church leadership is now totally subservient to an ideology that is anti-human at its very core. It is shocking to see Pope Francis making a parody out of a passage from the Book of Isaiah, announcing imminent catastrophes for those who do not convert to ecologism. We are shocked to see a document, which would seem to be authoritative, that is full of clichés and bizarre theories like those concocted during bar conversations.

A point- by-point rebuttal of what is written in these pastoral guidelines about climate change and its effects on populations would require more than one article. But these are topics that we have already dealt with several times in the Daily Compass (see here). In any case, those who wish to inform themselves, you may compare the Vatican document with the recent  Catholic Social Doctrine Report published by the Cardinal Van Thuan Observatory on the theme of "Environmentalism and Globalism: New Political Ideologies" and to which we at the Daily Compass made valuable contributions.

Here, however, I will limit myself to a few general considerations. The first concerns the secularisation process that now appears to be complete even inside the Church, or at least in terms of the documents her leaders issue. The language of this particular document - which is intended to influence every last parish - on climate issues and displaced persons is entirely borrowed from ecological movements and UN bodies. The only conversions mentioned are more ecological lifestyles and transitioning energy consumption to that of renewable resources. The only mention of an eternal perspective - to be passed on to young people - is quite revealing. It has to do with "the kind of environmental conditions people will leave for their children and grandchildren". In other words, even eternity is reduced to an entirely earthly dimension. Any other comment is superfluous.

The second issue is that in this leveling of truth, the Church blows the bullhorn of a myth - the climate change narrative - which it passes off as sound science. The myth is re-proposed succinctly in these pastoral guidelines when it states that the Earth's climate system "after more than 10,000 years of relative stability—the full span of human civilization—our home planet’s climate is rapidly changing on account of human activities." And, of course, there is an earthly Golden Age to return to: the age of primitive peoples, whose wisdom and harmony with nature is continually celebrated in the Vatican document (again with a view to "learn from the peoples of the Amazon").

We must resign ourselves to the fact that it is useless to talk to about reality, i.e. about a climate that is always changing; that there have been warmer eras than the present one; that even from the Industrial Revolution (described as the origin of the disruption) to the present day there has been no linear increase in temperature, but a gradual growth that has had several ups and downs; that there is no evidence of increases in extreme natural events linked to human activities; that the economy of primitive peoples is the exact opposite of being harmony with nature.

Those who are prisoners of myth are impervious to any serious enquiry. They become intolerant and violent toward anyone who even question their theories. In fact, the Vatican document is clear: those who do not see the climate disaster and its consequences are either ignorant or pursue reprehensible personal interests (maybe one day they will tell us how much money flows into Vatican coffers from international organisations advocating sustainable development).

A third consideration concerns the issue of development, which is considered the source of every ecological disaster and the cause of greenhouse gas emissions which (by changing the climate and with so many extreme natural events as a consequence) would damage the poorest countries and be responsible for so-called “climate displaced people.” Now, if there is any evidence at all, it is that it is precisely underdevelopment that makes so many populations vulnerable to extreme climate phenomena as well as to disease and any other adverse events. We need only think of the difference in damage and human losses that the same hurricane causes, for example, when it hits the coast of Nicaragua and then coasts of the United States. It is clear that a developed country is better able to defend itself against natural disasters because they are able to provide warning systems and infrastructure capable of resisting and protecting the population.

One final consideration about development: the Pope is promoting the ecological crusade believing that he is bringing help to poor countries in the name of the poor. In reality, he is giving a major hand to those who want to physically eliminate the poor. This is what the concept of "sustainable development" is for. It is written in black and white in the report that gave birth to this concept (Our Common Future, Brundtland Commission Report, 1987). In order to save the environment and ensure development, the population must be reduced via birth control and there must be a halt to economic growth. This is no surprise: its advocates are all descendants of eugenic societies and continue to advocate these ideals.

Is it even possible that no one inside the Vatican has ever asked why the new experts they have chosen to work with - from Jeffrey Sachs on down - are as environmentally conscious as they are deeply committed to advancing contraception and abortion? It is no sad coincidence, but actually the result of consistent thinking. It is eugenics. Such faithless and ignorant prelates are leading the entire Church to becoming an instrument of promoting eugenic societies.