Great Britain confirms: unborn Down children can be eliminated

The rejection of Heidi Crowter’s appeal, courageous defender of the rights of Down people, legitimises discrimination against the disabled by allowing abortion up until birth even in the birth canal. The Catholic bishops protest: an "illogical and unjust" sentence. 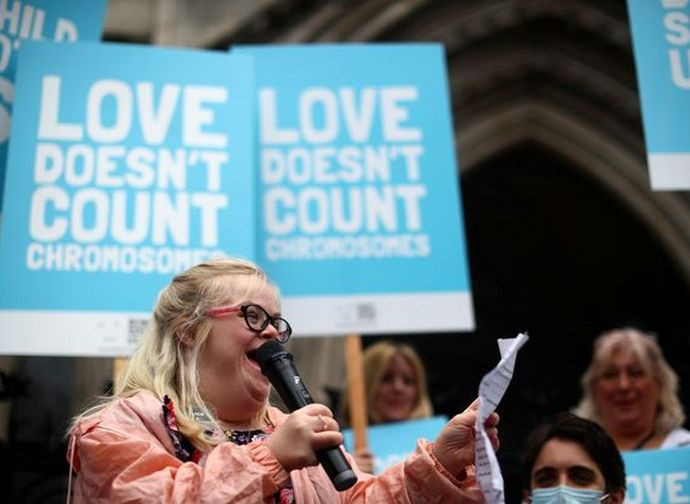 For the second time, it’s thumbs down for the rights of Down babies before birth in the UK. On November 25, Heidi Crowter who has Down syndrome and her fellow plaintiff Máire Lea-Wilson, whose two-year-old son also has Down syndrome, lost their appeal against the UK government. They had challenged a section in the 1967 Abortion Act which permits foetuses with disabilities including Down syndrome to be killed up to nine months in the womb and even in the birth canal. They requested it be brought to 24 weeks the same time limit for a healthy foetus. But, the UK government has decided to stand by the Equality Act  2010 which states human rights begin after birth and not in the womb.

As the law stands in Britain, mothers have the legal right to abort their babies at full term for any type of malformation even easily correctable defects like cleft lip or club foot. This prompted Heidi Crowter to argue the law is discriminatory and justifies the systematic killing of less than perfect foetuses. Eventually, it could put Britain in league with countries like Iceland and Denmark, where Down Syndrome is practically extinct.

Currently, the abortion rate is estimated to be 90% for Down syndrome despite the quality and length of their lives have significantly improved over the last 50 years and even though 99% of people with Down syndrome are happy with who they are. But, mothers, often driven by the fear of raising a disabled child, once a diagnosis confirms the condition, succumb to the immense pressure to abort under the guise of obtaining rights and freedom. Many testify with regret afterwards, that the decision to suppress their offspring, condemned them to a life of sorrow wondering who their child would have been.

According to Heidi, that suffering should be avoided. She argues that there is no need to fear Down syndrome . In a YouTube video   she demonstrates that being Down doesn’t stop her from being bright, articulate and jolly. Nor does it prevent her being surrounded by family and friends who love her and to whom she in turn brings endless happiness and joy. “I want people to look at me and say ‘this is just a normal person”, she often says.

When Heidi addressed reporters outside the Appeal Court saying, “I am very upset not to win again, but I will keep on fighting because we have already informed and changed hearts and minds and changed people’s opinions about the law”, she was stating that years of misinformation and outdated ideological misconceptions can be countered by reality. And this is the reason she believes her campaign should continue with an appeal to the Supreme Court.

But there is a hard core opposed to the law being reviewed. The court of appeal judges Lord Justice Underhill, Lady Justice Thirlwall and Lord Justice Peter Jackson, said this in court: "The court recognises that many people with Down's Syndrome and other disabilities will be upset and offended by the fact that a diagnosis of serious disability during pregnancy is treated by the law as a justification for termination, and that they may regard it as implying that their own lives are of lesser value. But it holds that a perception that is what the law implies is not by itself enough to give rise to an interference with article 8 rights (to private and family life, enshrined in the European Convention on Human Rights)."

The fear of change was also evident in Clare Murphy’s statement, chief executive of the British Pregnancy Advisory Service, BPAS, which provides abortion care services. "There is no contradiction between a society which champions the rights of disabled people and one which allows women to make difficult decisions in heart-breaking situations," she said. "If successful, this case could have had far-reaching implications. The claimants have argued in court that foetuses should have human rights - this has never been decided in law and would go against many years of legal precedent in the UK." Ms Murphy said the case was an attack on pregnant women's rights - "not just to abortion, but to making their own decisions during childbirth".

While the Catholic bishops were among the few to react negatively to the verdict. Bishop John Sherrington, Auxiliary Bishop of Westminster and Lead Bishop for Life Issues for the Bishops’ Conference, criticised the sentence as “illogical and unjust. “Whilst the judgment claims that the section 1(1)(d) of the Abortion Act 1967 does not have ‘any significant role in causing discriminatory attitudes against disabled people generally, or those with Down’s in particular’, the year-on-year increase in disability-selective abortions tells a very different story, Bishop Sherrington said in a statement. “I echo the words of Pope Francis, who strongly discouraged the use of prenatal diagnosis for selective purposes as ‘it is an expression of an inhuman eugenic mentality, which deprives families of the possibility of welcoming, embracing and loving their weakest children.’ “We must continue to advocate for greater support for families caring for a child with disability. I offer my prayerful support as Heidi considers seeking permission for the case to be heard at the UK Supreme Court.”