Heidi Crowter, with Down syndrome: I’m suing the British government for discrimination

The woman who recently won the right to have her case against the abortion law reviewed in the London Court of Appeals because it discriminates against unborn babies with Down syndrome, speaks to The Daily Compass: “The law makes me feel like I should not exist. But people need to know that we are human beings who can have a great life. My Christian faith gives me the strength to fight this battle”. 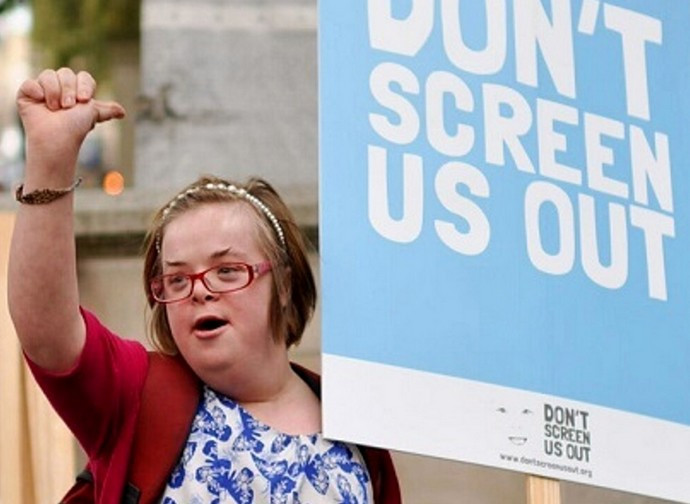 “My Christian faith is the reason why I am fighting this court case, because I know that if God is for me, who can be against me?” The audacious speaker is Heidi Crowter, the 26-year-old woman who recently won the right to appeal a High Court ruling on laws that allow abortion until birth for babies with Down syndrome. The hearing will take place this summer on 13 July in the Court of Appeal in London. Not many expected a young woman with Down syndrome to challenge the United Kingdom Government and with such conviction. But that’s Heidi Crowter, unperturbed by norms, a born optimist and a constant surprise.

Heidi, has been campaigning over the last five years for a change in the 1967 Abortion Act with Don’t Screen Us Out, an association of thousands of people with Down syndrome which she helped set up; in fact, as the law stands, it denies equal treatment for the unborn with Down syndrome in Britain.

In September 2021, she lost the first landmark case when two High Court judges ruled that the current legislation is lawful. But now that she has been given permission for the case to be heard again, she wants her campaign to reach as many people as possible. Heidi is convinced the reason for the estimated 90% abortion rate in Britain when mothers discover their baby has this disability is the fear caused by a lack of accurate information. Last year, the Daily Compass covered Heidi’s remarkable fight in the High Court.  Now, in this compelling interview, she speaks emphatically about her own life with Down syndrome, how ignorance breeds injustice and Queen Esther, the source of her uncompromising zeal.

Heidi, you are taking the highest institution in Britain to court, few would have the courage to do what you are doing. The first question that comes to mind is what’s the source of your fighting spirit?
My Christian faith is the reason why I am fighting this court case, because I know that if God is for me, who can be against me? In fact, becoming a Christian was the best thing I ever did in my life. I have a lot of biblical characters who help me but the one that sticks out for me is Esther.

Why do you identify with this Old Testament queen?
She was a courageous woman who risked her own death to save her people from manslaughter. Now, I want to make sure that unborn babies with Down syndrome have a chance of life and I want to show the world that Down syndrome people are amazing just the way they are. When I rarely get nervous, I think of that amazing woman who through her faith saved all her people and she gives me the strength to continue my campaign.

What was the catalyst for your campaign against the Abortion Act?
The reason I started this court case is because I am someone with Down syndrome and the current law makes me feel that I should not exist in this world. I want people to hear my story and be encouraged. They need to know that a baby with Down syndrome can live a vibrant life. Look at me, I live on my own with my lovely husband James who loves me just the way I am. All I want is to be accepted in society as a human being not to be considered a problem. I also hope that mothers who are expecting a baby with Down syndrome will see that their baby will have a great life like me. I have a solicitor Paul Conrathe helping me in my legal case and my fellow claimant Máire Lea-Wilson who has a 2 year old son with Down syndrome called Aidan. He is a cheeky monkey and I love him just the same as my nephew Josh.

Just recently, after losing your case in the High Court, you won the right to appeal the ruling on the abortion law. How do you think the court’s opinion could be changed this time?
The court needs to take the time to get to know the person behind the chromosome. I think the court needs to meet people with Down syndrome and to understand how the present law makes them feel. They can’t judge us before they have met us, they could be surprised.

The court could say that the Abortion Act was already reviewed in 1990 by lowering the gestation limit from 28 to 24 weeks due to medical improvements even if this did not include Down syndrome. Why do you think abortion for Down syndrome remained unchanged considering life expectancy and quality of life has increased considerably since 1967 when abortion became legal?
I think the reason why the abortion rate has not changed is because in 1967 when the Abortion Act came in, people with Down syndrome were not allowed to go mainstream school, they were put into institutions and not recognised as normal people. A bleak picture was painted of children with DS: They will never walk, talk or live on their own or get married. I want people to move with the times and not make decisions based on inaccurate information. When I first started my court case when I told people about the current law, I discovered they didn’t know anything about the law. This is why I have raised the issue in the public domain. I have even changed journalists perspectives about me. One journalist said, “that interviewing me and James was the most fun interview they ever did”. Please meet us before making assumptions about Down syndrome people!

The last court ruling that rejected your case stated that the legislation as it stands is “lawful” because it “aims to strike a balance between the rights of the unborn and of the woman”. How do you think the change you want made to the law, still guarantees that presumed balance of rights?
The issue of this campaign is nothing to do with women’s rights although I do respect their decision, this is purely about downright discrimination. I don’t see any difference between my nephew and my husband who has Down syndrome, we are amazing just the way we are. My advice to the women who think they may not be able to cope with a baby with Down syndrome is meet someone with Down syndrome. We will show you that your baby can have a great quality of life, there are lots of support groups if needed for those with Down syndrome.

You have certainly shown the world that Down syndrome adults can live a happy and fulfilled life. You are a married women, educated and have work experience. Do you think your campaign has succeeded in changing public opinion on disability?
Yes, my court case has taken the world by storm, I have been on countless channels like sky news, channel 5 in the U.K. and many others. I think the court case has caused many to reflect on how we value others and how we view them. I think there is still a difference to be made in this world, for people to look inside themselves and see life through God’s eyes.

The word ‘inclusion’ features frequently in political language. Have any members of the U.K. Parliament or a party been willing to support your cause?
Yes I have had quite a lot of support from Lord Kevin Shinkwin who is a disabled peer in the House of Lords. He is a very good role model for me. He shows how people with disabilities can be recognised in politics.

Your husband is always by your side. What is his role in this battle?
My husband James is absolutely amazing, he has always stood by me. When things get tough, he is a shoulder to cry on. When I lost the court case, he hugged me and I felt loved and accepted in his warm arms. His role in this battle is to support me in this campaign and console me when I get upset, and when I doing some fantastic media interviews.

If you are successful, how do you predict society will look in future years for those with Down syndrome?
There is no if about it, I will be successful because the God of the universe is on my side and no one can overthrow a child of God. I will win this, because no one can beat God.