"The abortion of Down babies is discriminatory". British government stands trial

Today the hearing begins which challenges the law that allows abortion up to 24 weeks, but in the case of disabilities such as Down syndrome up to nine months. The courageous action of two women: "Once a diagnosis for Down syndrome is confirmed, there’s tremendous pressure to have an abortion. It's an offensive law " 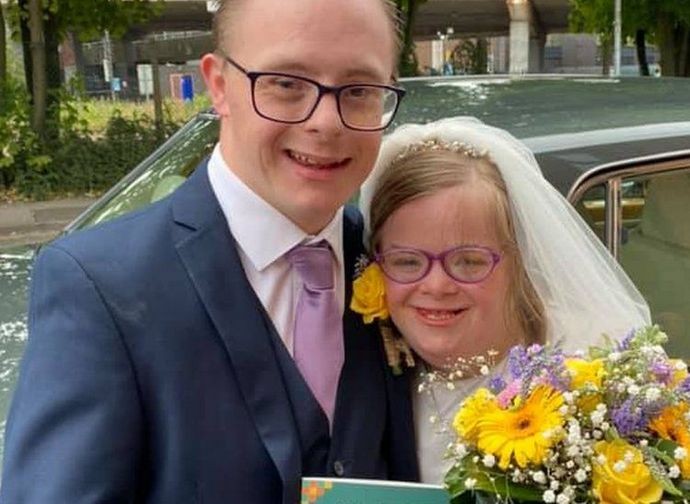 Should Down syndrome foetuses have the death sentence hanging over their heads until birth? This is the decision the High Courts in England will decide after a two day hearing which begins today.

The landmark case against the U.K. government over a disability clause in the current discriminatory 1967 abortion law was brought to the court by Heidi Crowter, a 25-year-old woman from Coventry who has Down’s syndrome, together with Máire Lea-Wilson from Brentford, West London, whose twenty-three-month-old son Aidan has Down’s syndrome. They are challenging the UK Government to review the current law which decriminalised abortion, over 40 years ago, because it does not provide for “equality in the womb”.

Currently in England, Wales and Scotland, there is a general 24-week time limit for abortion, but if the baby has a disability, including Down’s syndrome, cleft lip and club foot, selective abortion is legal right up to the moment of birth.
This is not the first time the U.K. abortion law has been subjected to review. In 1990, the Human Fertilisation and Embryology Bill lowered the gestation limit for abortions from 28 weeks to 24 weeks because of improvements in medical care. This is the currently accepted point at which the foetus is considered viable outside the mother's body.

But, Mrs Crowter, who celebrated her first wedding anniversary yesterday and is married to James Carter, who also has Down syndrome, is arguing that all non fatal disabilities should be subjected to the same standard 24-week limit. “People shouldn't be treated differently because of their disabilities (...) it's downright discrimination.”
Her campaign, which began several years ago before she was married continues to be conducted under her maiden name Crowter, included writing to the ex-Health Secretary Matt Hancock last year. She pointed out that “the law was "deeply offensive". “A baby without Down's syndrome can be aborted up to 24 weeks, but a baby like me and James can be aborted to birth, (...) we want to show the world we have a good quality of life."

Lord Shinkwin, a Tory peer with brittle bones, tried to achieve the same goal in 2017. His private member’s Abortion (Disability) Bill made it to the final legislative stage in the Lords after five months of debate. On February 24, seven peers spoke against it, effectively “talking out” the Bill and blocking any chance of it becoming law. He argued that his colleagues “don’t want disabled babies to see the light of day”.

Although the attitude to Down syndrome has changed significantly over the last 40 years, the mile stones are not reflected in the current legal provisions. In the 1960s people with Down's syndrome were almost automatically institutionalised at birth. By the 1980s, the government started moving people out into the community after a series of scandalous reports revealed the horrors of life in those institutions.

Since then, the health and life expectancy of people with Down's syndrome has improved significantly. The genetic condition, caused by an extra copy of a chromosome, affects 1 in 700 babies. In 1945 life expectancy of children with Down's syndrome, which changes how the brain and body develop, was 12 years. Today people expect to live into their 60s due to the result of improvements in the treatment of related symptoms. They frequently acquire job skills and some degree of self-sufficiency. Heidi Crowter is happily married and works as a children’s hairdresser.

In fact, contrary to popular belief, people with Down syndrome are happy with their lives, Down syndrome facts and statistics show. Namely, one study uncovered that 99% of its participants were happy with their lives and loved their families, and 97% liked who they were.
Yet despite this, the abortion rate or “systematic killing” of disabled  babies as Lord Shinkwin put it is estimated to be 90% for Down syndrome due to the consistent pressure women are subjected to once a diagnosis confirms the condition.

Máire Lea-Wilson was placed under pressure three times to have an abortion after a 34-week scan revealed her son had Down’s syndrome. “ I have two sons that I love and value equally, but the law does not value them equally," she said. “My motivation for taking this joint legal action with Heidi has always been simple. As a mother, I will do all that I can to ensure the fair and equitable treatment of my son, Aidan.” Mrs Lea-Wilson said the case is "not about the rights or wrongs of abortion" but about "removing a specific instance of inequality of the law."

Cheryl Bilsborrow, whose two-year-old son Hector has Down's syndrome, told a similar story when she spoke to the BBC. She said, as an older mother, she had felt pushed into taking a test to detect if her baby would likely have the condition. Then, she added, she felt "pressured to terminate", saying she was offered an abortion at full term, three days before giving birth to Hector. She described Hector as a child who was "gorgeous" and loved.

Two mums from Hampshire in England have made a film to dispel the myths of parenting Down syndrome children. Their efforts to disseminate more information about Down syndrome is so that more families would be willing to raise children with the condition rather than kill them before they enter the world. They say that the fear people feel when they are told their child has Down syndrome is unnecessary if parents are supported and informed that their children can grow up to be independent and live fulfilling lives.

Instead, the one-way flow of information is substantially towards cancelling disability by abortion without significant alternatives on offer and by providing parents with out of date or misguided information. “During this time of great vulnerability, I was told that my child would not be able to live independently, might not be able to walk or talk, would suffer through surgeries to correct his intestinal issues and possible congenital heart defects, that there was a high chance of stillbirth, and that he would make our lives so much more challenging,” Lea-Wilson said in a statement published by Sky News. She said being repeatedly offered an abortion gave her the sense that Down syndrome “must be very, very bad indeed.” But I can now say, “this law, which allows abortion up until birth, is outdated, and we can do so much better than this.”

Even The UN Committee on the Rights of Persons with Disabilities has consistently criticised countries which provide for abortion on the basis of disability.

Lawyer Paul Conrathe, who represents Crowter and Lea-Wilson, is optimistic and has called the High Court hearing a “hugely significant moment.” He said, “The Court has recognised it is arguable that the State is acting unlawfully towards babies with Down’s Syndrome by allowing them to be aborted up to birth.”
And if he succeeds, it could be the first victory in a war to save other disabled lives which have fallen victim to today’s modern eugenic slaughter houses, in a world that has forgotten that each one of these victims was a unique, irreplaceable human being made in the image and likeness of God.