In Germany open warfare is now being waged to break down the bastions of faith and doctrine. After the blessings to homosexuals and women “priests” preaching, it is now the turn of so-called intercommunion. The leaders of the Eucharistic committees take part in the Protestant Eucharistic Service and the Lutheran leaders in the Catholic Mass. Both approach their respective communions under the eyes of the Bishop of Limburg. In the background there are accusations against St John Paul II and the attitude of the Holy See, which has condemned the blessings of gays. Meanwhile, with this huge liturgical abuse, the divine law has been violated. 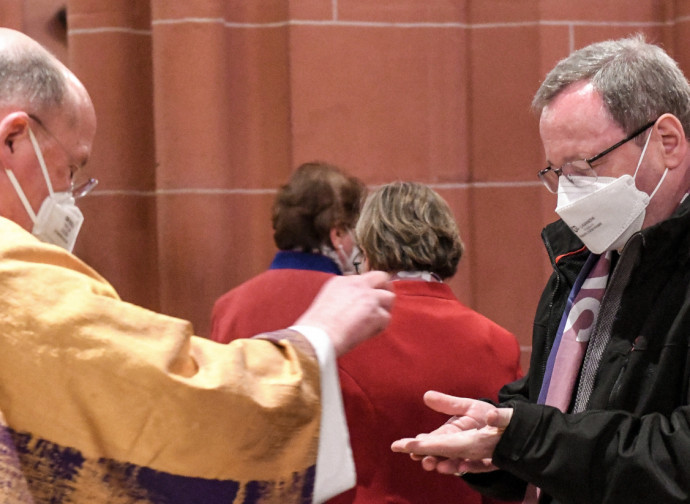 Things come in threes. In Germany open warfare is now being waged to demolish those bastions in the Church that are still standing, despite the violent assaults of recent years. On 10 May last year, the extent of ecclesial disobedience included the blessing of couples of all genders and kinds (see here), including virtual couples (i.e. singles), as a sign of protest and challenge to the negative Responsum of the Congregation for the Doctrine of the Faith.

We then reported (see here) how, from 15 to 18 May, twelve female aspiring priests preached during Eucharistic celebrations, in express violation of canon 767 § 1 of the Code of Canon Law, which states that the homily, “being part of the liturgy itself”, must be “reserved for the priest or deacon”.

This time it is the turn of the communicatio in sacris. They had already promised (or threatened) this in March (see here): when the time came, they kept their word. In the calendar of ecumenical meetings Ökumenischer Kirchentag, in fact, four simultaneous celebrations were planned for 15 May, in which people could participate freely, regardless of their denomination. A “full” participation, since anyone who wished could also receive Communion. The celebrations included a Catholic Mass, a Protestant Eucharistic Service, a celebration by the free evangelical churches, and Orthodox Vespers.

The Orthodox are not foolish: for them the communicatio in sacris remains a serious matter and they certainly do not use the sacraments to promote ecumenism. Theoretically, even if with important differences since the approval of the new Canon Law, this should also be the case for Catholics, since canon 844 §1 has not yet been abolished: “Catholic ministers licitly administer the sacraments to the Catholic faithful alone, who likewise receive them licitly from Catholic ministers alone”. Palaeolithic.

The same Code also provides that, when there is a real need and it is impossible to have access to a Catholic minister, Catholics can receive the sacraments of penance, the Eucharist and the anointing of the sick also from non-Catholic ministers, “in whose Church the aforementioned sacraments are valid” (§ 2). In turn, Catholic ministers may administer these sacraments to the faithful of Eastern Churches not in full communion with the Catholic Church, if they request them and are properly disposed. For the others, such as Protestants, this is only possible if there is a grave necessity and, above all, “provided that they manifest Catholic faith in  respect to these sacraments and are properly disposed” (§ 4). The encyclical Ecclesia de Eucharistia, in n. 45, specified that the purpose of this exception is “to meet a grave spiritual need for the eternal salvation of an individual believer, not to bring about an intercommunion, which remains impossible until the visible bonds of ecclesial communion are fully re-established”. So either everyone was about to die, or coercion was exerted. Indeed, the divine law was violated.

By shrugging off these liturgical-doctrinal trifles, the elite of the schismatic German Church showed their negligence! First on the list was Mr. Thomas Sternberg, Catholic co-chairman of Ökumenischer Kirchentag, president of the Central Committee of German Catholics (ZdK) and one of the four members of the presidency of the Synodal Path. He, Sternberg, had to set a good example. So he decided to take part in the Protestant Eucharistic Service and receive “communion” (photo opposite).

Mrs Bettina Limperg, Lutheran co-president of the ÖK, on the other hand, attended the Catholic Mass, receiving the Holy Eucharist from the hands of the dean of Frankfurt Cathedral, Fr Johannes zu Eltz (photo top left). Immediately after Mrs Limperg, Bishop Georg Bätzing, Bishop of Limburg (diocese to which Frankfurt belongs) and President of the German Bishops' Conference (cover photo), took Holy Communion. The bishop will evidently not sanction his own dean or the president of the ZdK with any canonical penalty, as would be provided for by can. 1365. Accomplice. Or perhaps instigator?

The ecumenical days were also an opportunity to deliver the next challenges to Rome. As if the serious provocation of intercommunion were not enough, Bätzing thought it right to add fuel to the fire. In a video interview (summarised here), he said he was surprised by the Vatican's ‘No’ to the blessing of gay couples, stressing that the position taken by the Congregation would not be helpful. For what, who knows. The DBK president then hypocritically “distanced himself” from the blessings of 10 May, not because of their content, but because of their controversial form. He hoped that “these couples, who live in fidelity and mutual trust and who base their lives on the foundation of their Christian faith, giving witness of faith, will receive God's blessing”. The Christian faith has become an empty box, to be filled at will.

The Holy See's position, according to Bätzing, is completely anachronistic, because, according to him, it did no more than reiterate a doctrine that has long since been superseded by pastoral practice. A practice that will be further advanced by the Synodale Weg: “If we come to decisions, and we will, then this will develop a dynamic that will also lead to results”. The famous processes to be initiated.

Even more provocative were Sternberg's answers. When asked about the priesthood of women, the “multi-president” of the German church accused John Paul II of being guilty of having “stifled the discussion” on the priesthood of women with the apostolic letter Ordinatio sacerdotalis of 22 May 1994. “This demand in the Church has not been upheld and now it is creating a powerful explosion.”