Argentina and Piedmont are geographically distant lands, but linked to Bergoglio's life and origins. Both their cuisines are simple and exalt the purity of ingredients. And a book, “At the Table with Pope Francis”, contains some of the Argentine pontiff's favourite recipes, from mate to bagna càuda.
- THE RECIPE: BAGNA CÀUDA 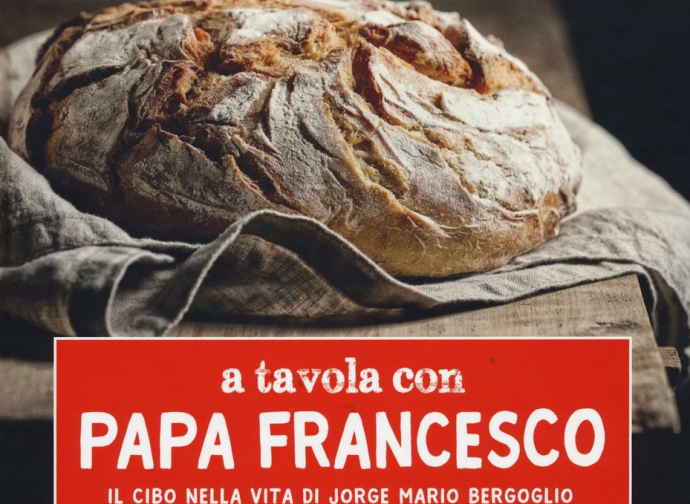 Born in Buenos Aires, but with solid Italian roots (Piedmont and Liguria), Pope Francis lived a secular life before taking his vows. He graduated in food chemistry and worked at various jobs, from the most humble (cleaning a factory) to the most astonishing (bouncer in a nightclub). He even had a girlfriend. Then, after entering the seminary, he was ordained a priest at the age of almost 33. And the rest is history. But what interests us most here is the Holy Father's relationship with food. And today, to remain with the theme of the column “Popes and Cookbooks”, we talk about a cookbook that concerns him, because it contains his favourite dishes. The author is Roberto Alborghetti, an excellent visual artist and the author of 60 books, including “A tavola con Papa Francesco. Il cibo nella vita di Jorge Mario Bergoglio” [At the Table with Pope Francis. Food in the life of Jorge Mario Bergoglio], published by Mondadori. In this very interesting book we find not only recipes, but also various stories (several fake news about the Pontiff are debunked), episodes and anecdotes about the Pope's relationship with food.

We have all seen Pope Francis, more than once, accept a matero of mate from the crowd of the faithful. We have seen him receive gastronomic gifts such as cakes, fruit, biscuits, chocolates (even a chocolate nativity scene, which we reported on in an article in this newspaper) and even a special gift from former US President Barack Obama: a bag of fruit and vegetable seeds from the White House garden.

The Pope often shares his food with the poor, in churches, large parish halls and even within the Vatican walls (the gigantic “pizzata” for a few thousand people offered in the Vatican has remained in everyone's memory).

His homeland is famous not only for its dishes with meat (produced in large quantities on the open-air farms run by the gauchos on millions of hectares of pampas, where there are more than 10,000 square metres of pastureland for each cow), but also for vegetables, rice, soups, cakes, biscuits and various sweets.

Piedmont and Argentina: two lands far apart geographically, but also in terms of history and traditions. And yet, from the point of view of food, they have a common basis: carne scottona, or meat from heifers.

Piedmont, which is famous for its beef cattle, is a good match for Argentina, which has made beef its flagship. Here we must make a parenthesis and explain that the scottona is not a breed or even a cut, as mistakenly believed, but “a bovine animal with well-defined characteristics” (source: Accademia Macelleria Italiana).  Therefore, the scottona can belong to various breeds of cattle: Angus scottona, Chianina scottona, etc. (source: Accademia Macelleria Italiana). The important thing is to know that when we talk about “scottona” we are talking about the meat of a young female specimen that has never calved.

In Piedmont we find the Piemontese, a breed of cattle native to the region. Today, it is mainly used for meat, in particular for the presence of a muscular hypertrophy of the thigh (called fassone or “double thigh”), and still represents a characteristic element of the Piedmontese territory. In Argentina, the most important cattle breeds for meat are those introduced by the British in the 19th century: Shorthorn, Hereford and Aberdeen Angus.

Both Piedmontese and Argentinean cuisine are simple and emphasise the purity of ingredients maintained by cooking methods such as grilling, roasting or boiling. The village of Pope Francis’ ancestors, Portacomaro, in the Asti region, is a place where meat is eaten, as it is throughout Piedmont (the raw meat salad is famous), but mainly in the form of cured meats and sausages. To these are added sauces and accompanying vegetables that are very interesting from a gastronomic point of view. The Pope visited his relatives in Portacomaro, where a separate dialect, known as Portacomarese, is spoken. In this dialect, the publishing house Liamar has even published a book with speeches and homilies by Pope Francis, “Au ciàm ad preghé per me” (“I ask you to pray for me”). Let us say a few words about mate, mysterious to us Europeans, which is nothing more than an infusion based on yerba mate. Although mate is synonymous with Argentina, its origin is in Brazil, where the Guarani Indians have been consuming it for centuries, mixing the herb with cold water. The Spanish conquistadors modified the recipe by infusing yerba mate in hot water, resulting in an aromatic infusion with a strong taste. This gave them the impression that they were drinking tea. Today, mate is consumed not only in Argentina and Brazil, but also in Uruguay, Paraguay and Chile.

To enjoy it at its best, it is necessary to use the typical utensils: the matero (a spherical cup, traditionally made from a small gourd typical of South America, the Lagenaria siceraria, which is emptied and transformed into a container; nowadays it is made from ceramic, porcelain and even wood, and the complete set can be found on the Internet) and the bombilla, which is a large straw with a small filter to separate the liquid from the solid fragments. In Argentina, in 2013, with Law 26871, mate was granted the status of national infusion; and the evergreen plant from which it is derived, which in the past grew wild in many parts of South America, today continues to be cultivated exclusively in the provinces of Corrientes and Misiones, located in the northeast of Argentina. The yerba mate comes from this shrub, which is an evergreen and has several names in addition to its botanical name (Ilex paraguariensis): yerba de los jesuitas, yerba del Paraguay and yerba mate.

The mate is made by cutting off the ends of the twigs and exposing them to heat to activate the enzymes. This preserves the green colour of the leaves, which are then dried and broken up, and used to make infusions. Roasting, although mild, is also important for the development of aromatic substances that give the infusion its organoleptic characteristics. Along with coffee, tea and cocoa, mate is one of the most important natural sources of caffeine (sometimes incorrectly called mateine).

Due to the abundant presence of this substance, the infusion is traditionally consumed as a tonic, cardiotonic and balancing agent. In South American folk medicine, it is also used to treat headaches, digestive problems, rheumatism and obesity. Now that we know a little more about mate, it may be worth making it at home and tasting it.

On the Piedmontese side, we have chosen a preparation that can also be found in the book with the Holy Father's favourite recipes: bagna càuda. You will find it as a recipe accompanying this article. Piedmontese bagna càuda is a UNESCO heritage product, which means that it is listed among the intangible assets to be protected as “World Heritage”. It requires a particular etiquette, which we have described at the end of the recipe. It is delicious, very healthy and above all perfect for this Lenten period.