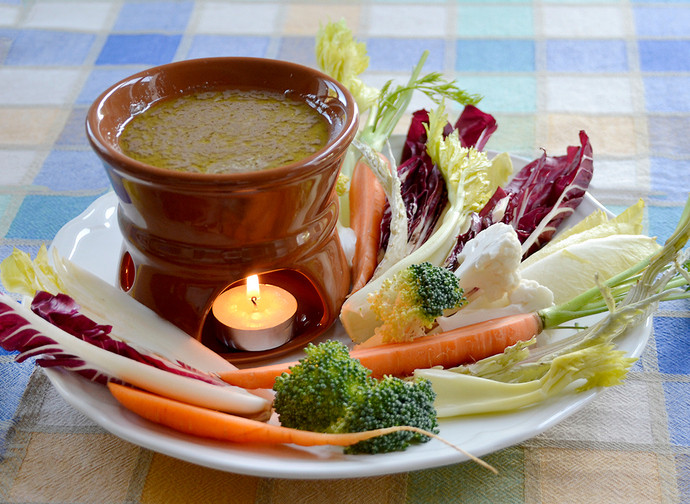 Recipe deposited by the Asti Delegation of the Italian Academy of Cuisine, on 7th February 2005.

Slice the garlic cloves, which have been previously peeled and stripped of their sprouts.
Place the garlic in an earthenware pot, add a glass of oil and start cooking over a very low heat, stirring with a wooden spoon and taking care that it does not take on colour; then add the desalted anchovies, de-boned, rinsed in red wine and dried, stirring gently.
Cover with the remaining oil and cook the sauce over a low heat for half an hour, taking care that it does not fry.
At the end of the cooking time, a small piece of fresh butter can be added if a softer flavour is desired.
Pour the bagna into the “fujot” (earthenware oven) and accompany it with the following vegetables:

It is traditional to collect the “thick bagna” at the end by scrambling an egg into it.

There is an etiquette for bagna càuda eaters which forbids, for example, overloading one's mouthful by using cabbage leaves or other pieces of vegetable as a “palot” (shovel), thus collecting too much of the “rich” part of the sauce. It is also inadvisable to dip already bitten pieces of vegetables, or bread, which would soak up unfair amounts.
Newcomers to dipping should be careful with the first few bites, as scalding is a very frequent occurrence. Everyone dips together in a cheerful and ebullient scramble: there are no turns or other formalities to respect.
In many cases, the final ritual involves slowly cooking a scrambled chicken or quail egg in the still-warm dian (earthenware pot), which can be enriched with a “little grating” of white truffle. Hot broth is also widely used with a “detergent” function to open the stomach for the bagna càuda or to close it at the end of the ritual.