The Aukus Treaty that was struck between Australia, the United Kingdom and the United States for technological cooperation between the three powers in the Pacific is infuriating France. Without being informed, Paris saw its mega-contract cancelled for supplying submarines to Australia. The new treaty reshapes alliances while marginalising NATO. 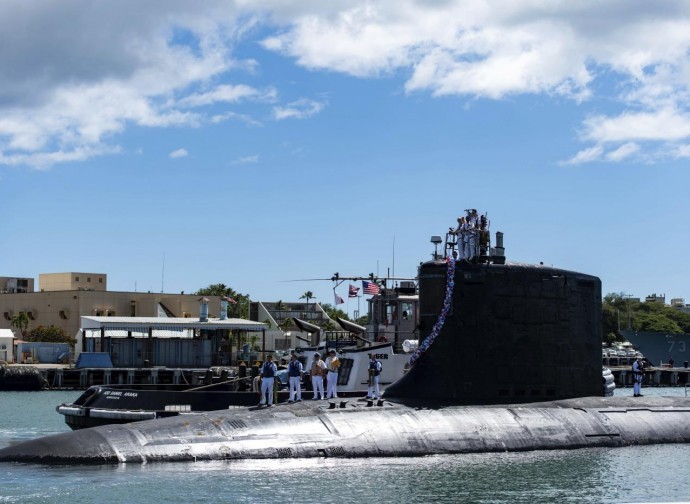 Australia, the Unites States and Great Britain are rebuilding an old axis born out of the two world wars and consolidated during the Cold War. The basic objective is to forge a new agreement in the Indo-Pacific region with the more obvious aim of strengthening the anti-Chinese front.

American President, Joe Biden, British Prime Minister, Boris Johnson, and the Australian Prime Minister, Scott Morrison, announced last 16 September the new Aukus military and industrial agreement. Aukus is based on the sharing of advanced military technology and achieving closer defence cooperation. The three leaders said that "the effort we are launching today will help sustain peace and stability in the Indo-Pacific region. For more than 70 years, Australia, the United Kingdom and the United States have worked together with other key allies and partners to protect our shared values and promote security and prosperity. Today, with the formation of Aukus we must recommit ourselves to this vision." The pact aims to facilitate the sharing of technology in areas such as artificial intelligence and underwater nuclear propulsion, as Australia has announced its intention to equip itself with long-range nuclear submarines enhanced by Anglo-American technical partnerships.

Beijing's response was immediate. Chinese Foreign Ministry spokesman, Zhao Lijian, described the Anglo-American decision to export nuclear technology to Australia as "extremely irresponsible" and called on the three countries to abandon their "Cold War mentality.” Australia will be the seventh nation in the world to be equipped with nuclear-powered submarines, while the US Navy intends to deploy its Virginia-class nuclear attack submarines at the Australian naval base in Perth. The United Kingdom has announced that it will strengthen its naval presence in the region over the coming years and will provide Australia with technology for the propulsion of nuclear attack submarines, of which Canberra will acquire at least 8 units. Hence, it effectively turned down a mega-contract worth almost 60 billion euros announced in 2016 for 12 French Barracuda diesel-electric submarines.

The agreement with Washington and London to build the submarines in Adelaide’s shipyards is, therefore, a serious blow to France, its image and its industry, especially because of the brutal way in which Paris was informed of the order’s cancellation. It seems to express a desire to humiliate the European power and Paris' reaction was very harsh. This brutal, unilateral and unpredictable decision reminds me very much of what Trump did," thundered French Foreign Minister Jean-Yves Le Drian, "I am furious and bitter. This is no way to behave between allies. Le Drian then announced that the ambassadors to the United States and Australia had been recalled "for consultations." The decision was taken "at the request of President Emmanuel Macron, justified by the exceptional gravity of the announcements" made by Australia and the United States for what Paris called "unacceptable behaviour between allies and partners".

The former French ambassador to the US, Gerard Araud, spoke explicitly of feeling backstabbed by the U.S. and Britain, noting that it would have been much easier for Canberra to buy nuclear submarines from France given that all French submarines are nuclear-powered and that the difficulty in the program for new Australian submarines had been precisely that of adapting them to conventional propulsion. "I am deeply shocked by this news, but also by the way we came to know about it," said the president of the French Senate's Foreign Affairs and Defence Committee, Christian Cambon. "This calls into question many certainties. We will have to examine all the consequences of this decision. We will have to question the recurrent attitude of some of our allies, who behave more like adversaries than loyal competitors." The French ambassador to Australia, Jean-Pierre Thebault, said explicitly that "this was a huge mistake, [due to] poor management of the partnership. We were never informed of any substantial changes" in the submarine programme.

The creation of Aukus also marginalises NATO and of course the European Union, which were neither informed nor consulted. After the withdrawal from Afghanistan, 'this is the second time a major decision of this kind has been taken without our involvement' and 'we are concerned about the consequences in a number of areas. We will have to discuss it at the EU level, but also in terms of NATO," a senior EU official told AGI.

The affair confirms the strengthening of the strategic axis between the Anglophone powers that won the Second World War and the marginalisation of the other allies, considered nothing nations playing second fiddle. This is all too evident today in the Pacific region, but it has also been evident for several years in Europe, where the Anglo-American-Canadian line has been leading the Atlantic Alliance in a tug-of-war with Russia and in military aid to Ukraine. Secondly, France's harsh response, and being a nuclear power that is not exactly a second-tier player in the Indo-Pacific where it maintains overseas territories and military bases, underscores the pride with which Paris defends its role and its national interests. This is so even when it involves its so-called "allies." Finally, it should be noted that the announcement of setting up the Aukus partnership came at the same time as the European Union's strategic commitment in the Indo-Pacific region was being defined and where the EU intends to deploy naval forces.