For the Church the daily news is the new Revelation

It is the daily news, current events, what history tells us that is the new Revelation. With the Church of Pope Francis, the 'prophecies' of Hegel, Martini, and Sartre are fulfilled: existence precedes essence and the press review is the new morning prayer. Migrations, globalism, ecologism, transitions, UN agenda, Chinese model, family planning, abolition of private property, homosexualism. There is no topical issue on which the Church today maintains a tough and antithetical position to that of the world, of resistance and opposition. 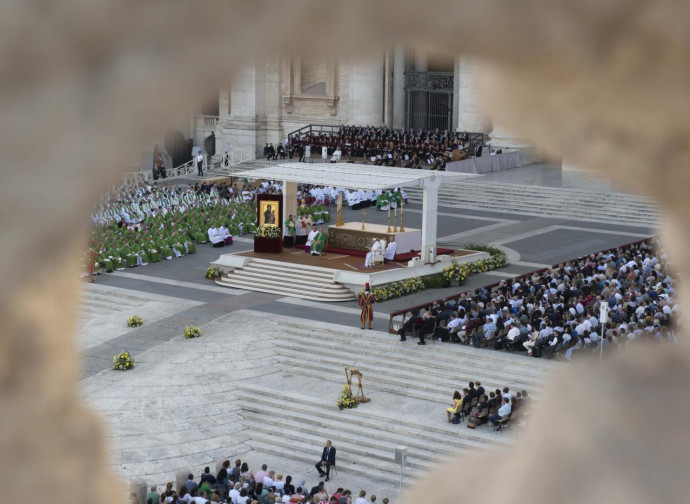 Every day Francis gives an interview to some newspaper. He chats about current events, what history tells us. He does not judge except in the light of some opinion, this too linked to what is in the news. He does not judge in the light of a doctrine removed from the news; he takes note of what happens, he asks questions, he throws a few stones into the pond, counting on the press to produce some new ripples.

Cardinal Martini's expression, which has become Francis' agenda, suggests that it is the world in its history that says what is true, and that the Church must hasten to follow. It is the news, current events, what history tells us, that is the new Revelation.

One of the themes of the Church's delay was, for the Cardinal, sexual morality. And indeed, the Church of Francis is racing to make up lost ground. The Pontifical Academy of Social Sciences is opening up to contraception and homologous fertilisation [HERE and HERE] and some agencies are predicting a forthcoming encyclical by the pope on the subject. Francis will certainly change the traditional teaching on the subject – no point in kidding ourselves - and the reason will be only one: what is in the news, current events, what history tells us is different and we must take note: morning prayers are the press review. Since today very few put into practice the teachings of Humanae vitae and – apparently - even Catholic couples use contraceptives ... then the Church must change its teaching. It is effectivity that dictates the law.

After all, what was the reason for the change in doctrine on the death penalty? The fact that sociologically the general sensibility on the subject had changed. And what was the reason for changing the Catholic proposition on adultery as Amoris laetitia did, if not the same, namely that current opinion and widespread practice were now quite different?

I would like to invite the reader of these lines to point me to a topical issue on which the Church of Francis maintains a tough and antithetical position to that of the world, a position of resistance and opposition. Migration? Globalism? Ecologism? Transitions? The UN agenda? The Chinese model? Family planning? The abolition of private property replaced by globalist sharing? Homosexualism? Even transhumanism is being cleared, today by leading theological journals, tomorrow even further up the church hierarchy.

Abortion, which should be the first and foremost subject of battle with the world, is now widely tolerated and a public commitment against it by the Church is judged as ideological and not pastoral. The Church merely 'takes note' of a ruling that prevents a child from being liquefied or extracted in pieces from its mother's womb, or even from having its body extracted while the head still remains inside, and then the doctor killing it by cutting its spinal cord.

Martini's current project is based on the principle that existence precedes essence. This principle is implicit in the prediction of reading the newspaper as morning prayer, since it would be the news – i.e. existence - that would tell us what we should think and what we should do. However, it was Jean Paul Sartre who said it with greater clarity: existence precedes essence. The Church too has an essence, immutable, founded by Christ and sustained in its indefectibility by the Holy Spirit, and then has an existence in the chronicle, in actuality, in history.

It is the former, the essence, that must give direction to the latter and not the other way round. It is from its essence that the mission and pastoral care of the Church derive and not the other way round. What the Church teaches must derive from its essence and mission and not from the news, current events and what history says. If contraception, or adultery, or homosexuality, or abortion ... are contrary to the natural and supernatural good, the Church must continue to say so, in coherence with its essence and mission, even if demoscopic statistics on people's actual behaviour say otherwise.

This is the biggest issue for the Church today. If the essence is forgotten, existence is no longer illuminated by any light. It will impose itself by blind effectivity, and the life of the Church will only be 'time', which takes everything away with it in its robbery.