Pope and abortion: something doesn't add up

Interviews with Pope Francis are now being churned out in a constant stream, a damaging phenomenon for the Church. However, it is worth noting his strange attitude towards abortion: very harsh in condemning the practice, extremely soft in drawing the consequences. 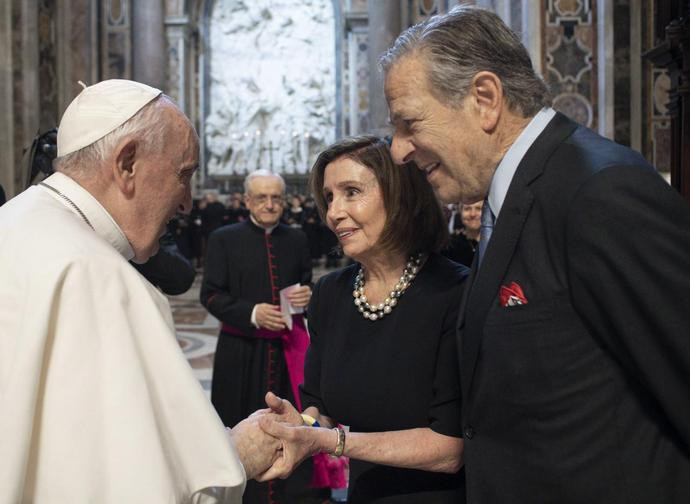 Frankly, we’ve had it up to here with interviews with Pope Francis. They are being churned out in a constant stream. In the last few days alone we have had three long-winded interviews: one with the Argentine agency Telam, then with the British agency Reuters (published in instalments), and finally with the Mexican broadcaster Televisa/Univision. In short, hardly a day goes by that we do not have to discuss this or that verbiage of Pope Francis. A river of words discussing: concepts that he has now been repeating for years; some extemporaneous opinion on the world’s political situation - often debatable if not embarrassing, such as his sweet words to Televisa with regard to the Cuban regime; some ecclesial or moral judgements, which sometimes generate different interpretations and controversies.

Even the Pope's most ardent fans should realise that these are interviews that, beyond their content, are ultimately damaging to the Church and the institution of the papacy. Because in this way the Pope's authority is diminished, reduced to the rank of an ordinary pundit (years ago there was already the joke about the gentleman who asked "Did he say anything about Roma's buying campaign?"). But above all it generates in the faithful (and non-) a confusion between what is personal opinion (legitimate, but debatable) and what instead is the teaching of the Church, which should be the Pope's only real concern.

It would therefore be a good thing if he stopped with these interviews, and if he really can't, if at least the journalists realised that not even they stand to benefit from selling such an inflated 'product'.

That said, however, at least the Pope's strange attitude towards abortion should be noted for its importance. On the one hand he is very drastic in his judgement: in the Reuters interview he repeated a concept already expressed in the past, "it is like hiring a hitman"; and then: "Is it licit, is it right to eliminate a human life in order to solve a problem?". But then in the same interview he becomes neutral about the Supreme Court ruling that denied abortion to be a right: the Pope says he "respects the ruling" but is unable to enter into the technical-legal issues. An incomprehensible 'diplomatic' response, given that there is nothing difficult to understand about the meaning of the ruling. Then, even worse, he launches a torpedo at the bishop of San Francisco, Monsignor Cordileone, who - consistently with the Catechism and the Code of Canon Law - decided to deny Communion to Democratic leader Nancy Pelosi for her open support of abortion: "When the Church loses its pastoral nature, when a bishop loses his pastoral nature, it creates a political problem," said the Pope. And a few days earlier he had openly disavowed Monsignor Cordileone, welcoming Pelosi into the Vatican and allowing her to receive Communion at the mass in St Peter's that the Pope himself began to celebrate (halfway through the mass he had a cardinal continue the celebration).

However, faced with the escalation of the war pro abortion in the US that President Biden himself is encouraging, the Pope returned to the subject in the interview with Televisa, explaining that, as a Catholic, Biden is 'inconsistent' in supporting abortion, but he leaves this to 'his conscience': “He should talk to his bishop, his pastor, his parish priest about this inconsistency”

The question that inevitably springs to mind is this: if Biden, instead of declaring war on unborn children, signed an executive order instructing the Border Patrol to fire on illegal immigrants entering the United States from Mexico, would the Pope still say that Biden is inconsistent, but it’s between him and his conscience? Or would he hurl thunder and lightning? Recall that for much less, on migration policies, in February 2016 Pope Francis called then US President Donald Trump a 'non-Christian'.

It is this double standard on abortion that leaves one mystified and, in the end, raises doubts about the Pope's real thinking on the matter: it almost seems as if on the one hand he keeps the pro-lifers happy by saying very harsh (sometimes even exaggerated) words against abortion, but then uses this to have a very soft pastoral approach, bordering on complicity.

The problem posed by Monsignor Cordileone and other bishops is not political at all: if abortion is a very serious sin, as Pope Francis also maintains, those who receive Communion without first repenting, reconciling with God, and changing their conduct, “eat and drink their own condemnation”, according to St Paul in the First Letter to the Corinthians. It is a matter of eternal life. Is the Pope really indifferent to the eternal condemnation of Biden and Pelosi? Or is it St Paul who is wrong?

However, the issue is much broader and concerns everyone: if it is permissible to receive Communion with such a grave public sin, then it is permissible for anyone in mortal sin, as long as they feel comfortable with their conscience. Why should it be any different for those who blaspheme, steal, cheat on their spouse, kill their parents, deal drugs, or those who otherwise incite to do so?

Here politics has nothing to do with it, the real issue is first of all the meaning of the Eucharist, whether or not it actually is the real presence of Jesus, with all that this entails. And if, on the other hand, one is convinced of what the Eucharist is, the problem becomes the real judgement on abortion: is it really this horrible murder, or is it considered not so bad after all?