Document proves Becciu did not pay to frame Pell

A document that has emerged from Australia and that The Daily Compass has been able to view proves that the money sent from the Vatican to Australia had nothing to do with the trial of Cardinal Pell. It was destined for a cyber security company for a contract relating to the management of some ".catholic" domains. 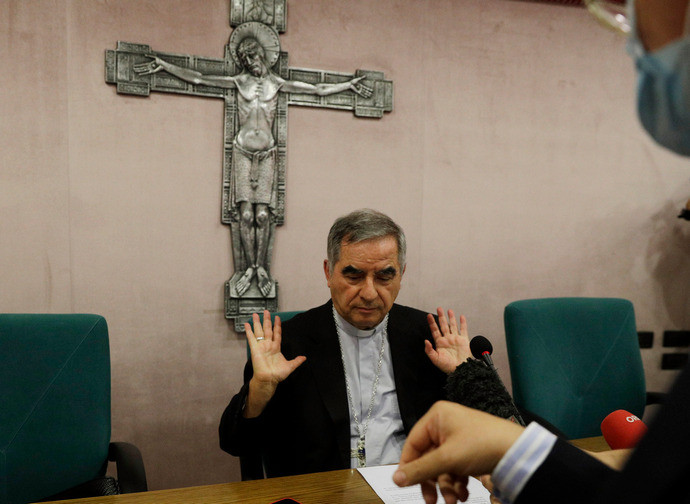 7 April was supposed to be the day of the interrogation of the most illustrious defendant in the trial about the luxury London building, but it was postponed to 5 May due to an impediment on the part of the defence lawyers. He is, of course, Cardinal Giovanni Angelo Becciu, who has been disgraced since the evening of 24 September 2020, when he renounced his rights to the cardinalate at the end of a 20-minute interview during which Pope Francis told him that he no longer trusted him. At the origin of the Pontiff's decision was the report of the Vatican judiciary on the alleged crimes of embezzlement that the cardinal supposedly committed and for which he was subsequently indicted. In that phase, prior to the request for a subpoena in the summer of 2021 by the Office of the Promoter of Justice, several investigative hypotheses on the actions carried out by Becciu during his role as substitute of the Secretariat of State ended up in some Italian newspapers.

Among them, there was also an alleged Australian trail linked to one of the most serious cases of injustice in recent history: at the beginning of October 2020, in fact, the Corriere della Sera wrote of "€700,000 sent to Australia through a number of transfers" that "could have been used to 'buy' the accusers in the paedophilia trial against Cardinal George Pell". Reading the articles that reported them at the time, those accusations seemed serious and rather circumstantial. Then, however, despite the spotlight remaining on the trial in the Vatican, the Australian trail was almost never mentioned again.

In the midst of this was the incredible error made by the Australian Transaction Reports and Analysis Centre (AUSTRAC), which, in response to a question from Senator Concetta Fierravanti-Wells, formulated in the wake of the reconstructions reported by the Italian newspapers, had indicated that the money flow between the Vatican and Australia in the last six years was $2.3 billion and across over 400,000 transactions. Although the figure seemed unrealistic to anyone, there were some commentators who considered it the smoking gun to confirm the idea of Becciu's paw behind the alleged plot against Pell.
This thesis was dismantled a few days later by AUSTRAC’s clarification, which admitted the error in calculation, clarifying that the total sum amounted to just $9.5 million over 362 transfers.

The only one to return to the subject was Cardinal Pell with sibylline statements: "We know that money went from the Vatican to Australia, $2.230 million, but so far no one has explained why", said the Prefect Emeritus of the Vatican Secretariat for the Economy. What we do know is that between 2016 and 2017 the Secretariat of State - of which Becciu was the deputy at the time - authorised the payment of multiple transfers worth a total of more than $2 million to the Melbourne-based company Neustar. With regard to those movements that were suspected of being connected with Pell's indictment, the Holy See's Press Office itself clarified in a statement on 13 January 2021 that "the amount is attributable to some contractual obligations and the ordinary management of its resources".

This was confirmed by documents that The Daily Compass was able to view: Neustar is actually a cyber security company - founded as AusRegistry International Pty Ltd in 2003 until it changed its name in 2016. Since August it 2020 has been called GoDaddy. The company is in the business of registering and implementing top-level domains (TLDs) and claims to be a trusted advisor to a number of government agencies. In fact, from the documents we have seen, in a letter dated March 2012, the then Secretary General of the Australian Bishops' Conference, Monsignor Brian Joseph Lucas wrote to Monsignor Paul Tighe, then Secretary of the Pontifical Council for Social Communications, to express on behalf of the Australian bishops their "support for the request of the Pontifical Council for Social Communications to acquire the generic top-level domain '.catholic' in the Chinese language (in simplified Chinese characters)".

When the ICANN (Internet Corporation for Assigned Names & Numbers) 'liberalised' the granting of TLDs, the Vatican moved to register and control exclusively the '.catholic' domain in English, Arabic, Russian and also in Chinese. The request was accepted in 2013 and the domain was registered by the Pontifical Council for Social Communications. The same office, therefore, to which Monsignor Lucas' letter was addressed, in which the Australian Bishops' Conference gave the go-ahead and which stated that this project (the creation of a 'dot-catholic' domain in Chinese) would "greatly facilitate the work of the Conference in authenticating the presence of the Catholic community in the digital space", confirming that the bishops would be happy to "collaborate with the PCCS in the development of this project".

If we take a closer look at the origin of the domain '.catholic' and the subjects involved in its registration, we discover that while the registrant is the Pontifical Council for Social Communications, the provider is AusRegistry International, i.e. the company that later became Neustar. The Registry Backend is indicated as GoDaddy, the current name of the former Neustar. In short, the intersection of this information suggests that it could be possible to hypothesise an answer to Cardinal Pell's question on the $2.230 million sent between 2016 and 2017 by the Secretariat of State: in fact, the beneficiary Neustar was the name of the company operating in Australia that had already registered and then managed the domain '.catholic' - including in Chinese.

Is it possible that the Secretariat of State sent that sum of money in order to comply with the "contractual obligations" on the project centred on that top-level domain that the Secretary General of the Australian Bishops' Conference had mentioned in 2012 in his letter to the Pontifical Council for Social Communications? It is certainly more likely than the spy-story of Becciu 'buying' witnesses and investigators to send a cardinal he considered a nuisance to jail and keep him away from the Curia.